Will Eisner Week is almost upon us. It’s become a fantastic time for libraries, schools, colleges and bookstores to promote graphic novels. And this year will be all the more memorable as we’ll also be celebrating the centennial of Will Eisner’s birth.

(It’s the centennial of Jack Kirby’s birth as well, but we’ll save that for another column.)

As you probably know, Will Eisner was one of comics’ visionaries. While he may not have actually created the first graphic novel (I tend to side with Jim Steranko on that landmark), he is clearly one of the most important people in promoting graphic novels and comics to the general public.

He was an innovative artist and an impressive entrepreneur. Looking through the lens of today, I think his most enduring legacy is as a champion of creativity.

With that in mind, I want to talk about three comic series that are fun, creative and imbedded with bit of Will Eisner’s enduring spirit (no pun intended) whispering to every reader.

And because we all live in the real world, let’s take note that there’s even a little more that’s impressive. While creatively inspired, each of these series is well packaged but still, comparatively, affordable.

There’s been a lot of frustration lately with the prices of the big two publisher’s comics. On one hand, Marvel is still charging $3.99 for comics but discontinuing the inclusion of digital versions. They will instead be offering snippets of longer stories that they hope fans will be interested in buying. Thus far, reaction to being served what essentially are ‘promo ads’ instead of content has not been positive. 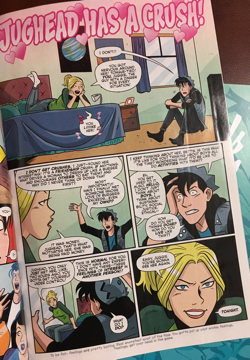 On the other hand, DC Comics, despite a recent public declaration to hold their line at $2.99, is more frequently charging $3.99 a comic. And the comics that are still $2.99 are published twice month, so that’s really setting back fans $5.98 to keep up.

One can argue that these monthly prices are less important as fans migrate to enjoying trade paperback collections and digital versions. But it is all the more impressive when “smaller” publishers can offer great comics on better paper and charge only $2.99. And that’s exactly the case with these three series:

Television’s Riverdale has been generating a lot of buzz on the CW. The various Archie titles are lot of fun too. I just gave the new Jughead title a try for the first time and I’m glad I did.
This gorgeous pink cover caught my eye, but the story inside was fun and fresh and made me hungry for more. This comic, like many of the new Archie titles, offers fans a main story and a reprint back-up story, complete with an introduction to the classic tale from the series’ writer.

Also of note, and this is where we get to the Eisner part, writer Ryan North employs a clever new technique. Jughead, as narrator, provides a little extra narration at the bottom of each page. It’s snarky and surprising. This innovation is just like eating potato chips, once you start you just want more.

I’ve talked about Brian K. Vaughn’s and Cliff Chiang’s Paper Girls here before. But I what I really love most about the latest issue is the cover. It is striking, clever and courageous. The image is intriguing and the colors stand out from everything else on the racks. Special bonus points to the creators for having the conviction to wrap the cover design around to the back cover.

It’s this boldness and creativity that, to me, is the embodiment of Will Eisner’s vision.

Moonshine is a fantastic Image series that’s a mash-up of horror stories and Bonnie and Clyde. I wasn’t clamoring for such a mash up, but I’m so glad that Brian Azzarello and Eduardo Risso created it. These two are masters of their crafts at the peak of their games. And together, they have that Lennon/McCartney vibe that to which, as a reader, you’re just elated to have a ringside seat. I missed the first few issues so I started with issue #4. But you know what? That didn’t diminish my enjoyment one bit. I just snagged issues 2, 3 and 5 at Comics For Collectors in Ithaca last weekend (we were in town for the fabulous Chili Cook-Off) and I’m so glad I did.

My planned March efforts won’t be as creative as these three series, but they will be fun. I’ll be celebrating Will Eisner Week locally and leading a presentation at the local library followed by a screening the next night of the Eisner documentary. If you’re in the Finger Lakes region, stop by!

And during Will Eisner Week – and beyond – treat yourself to some creative and contemporary comics. 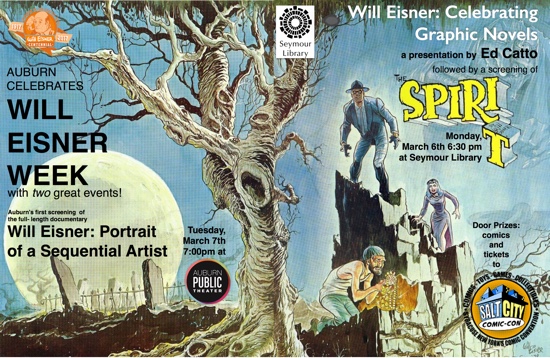