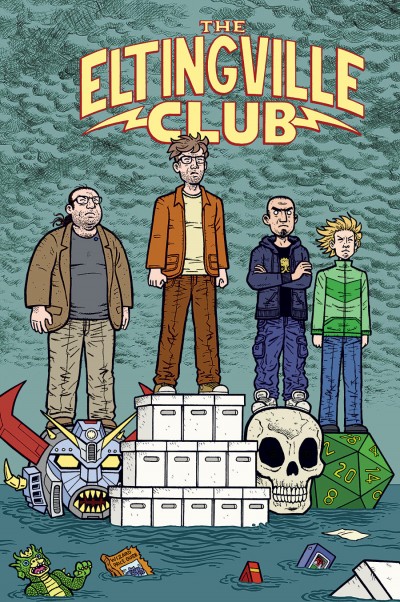 This is what being an ally looks like.  And it’s funny, too!

There are far too few comics that make me giggle like the little girl I am inside this old body.

And just about anything written and drawn by Evan Dorkin.

The first of his work that I liked was, I think, Milk & Cheese.  From there, I followed all sorts of weird little strips he did — strips that were literally little, in that there would be about eight on a page, with teeny-tiny lettering fit only for someone as young as I was at the time.

Also, Eltingville,  series of stories about the Eltingville Comic Book, Science Fiction, Fantasy, Horror & Role-Playing Club, four Staten Island teenaged fan-boys who make me cringe as much as laugh.  There is enough useless pop culture trivia occupying braincells that I could be using to learn a foreign language, but no, I have to know that Matter-Eating Lad’s real name is Tenzil Kem and he comes from the Planet Bismoll.

(I should also explain that I was way too old when I realized what a pun that last bit is.  Because I’m too geeky to think that way normally.)

The very last Eltingville story is out now at your friendly neighborhood comic book shop or Internet site.  I’m pleased to report that it’s brilliant.

The four former friends meet at San Diego Comic-Con.  One has a girlfriend.  This drives one to scream:

“See, this is why girls weren’t allowed in the club … Listen up, bitch.  Because I’m onto you. I watched you sittin’ there, laughin’ at us, mockin’ us, shovin’ your tits in our faces to work us all up!  You can’t stand seein’ us get along so you gotta stick your twat where it doesn’t belong to try to cunt everything up!!  Well, it won’t work!  You may have ruined fandom — you and all the other cultural immigrants who invaded our territory — but you won’t ruin us.!”

I can’t remember ever seeing such a painful expression of misogyny, revealed as the cowardly, selfish, expression of every man’s inner three-year-old.  (And, yes, women have a version of that about men, sometimes. It’s just that since women don’t run the world — despite what men who don’t have regular sex partners might think — our expressions of these feelings are less likely to have a similarly intimidating effects.)

These four guys are not powerful.  They lead lives on the dull, frustrated side of normal.  They are at an age when they start to realize that they aren’t going to achieve the ambitions they had as kids, and they are looking for someone to blame.

Maybe you think I’m reaching too far, ascribing a political motive to Evan’s story.  According to this, I’m not.  In the interview, Evan says, “Every day, there’s somebody doing something awful in fandom. And a lot of the times, it’s somebody from one of the companies or it’s a creator saying some dumb shit about women or transgender people. This is the audience, and the bizarre opinions that some people have… This attitude that comics or movies or gaming is just for them-it’s so myopic. It’s tunnel vision. The idea that you can’t even put yourself in another person’s place and understand the rampant misogyny of the world. Not just this. And how angry and hateful so many people are. People getting doxxed, people getting death threats.”

This is what an ally sounds like.  He’s not telling women and people of color and transgender people how to run their movement.  He’s telling men not to be awful.