“Into the Blue (Pants)!” The Weird Wild World of Leva Bates 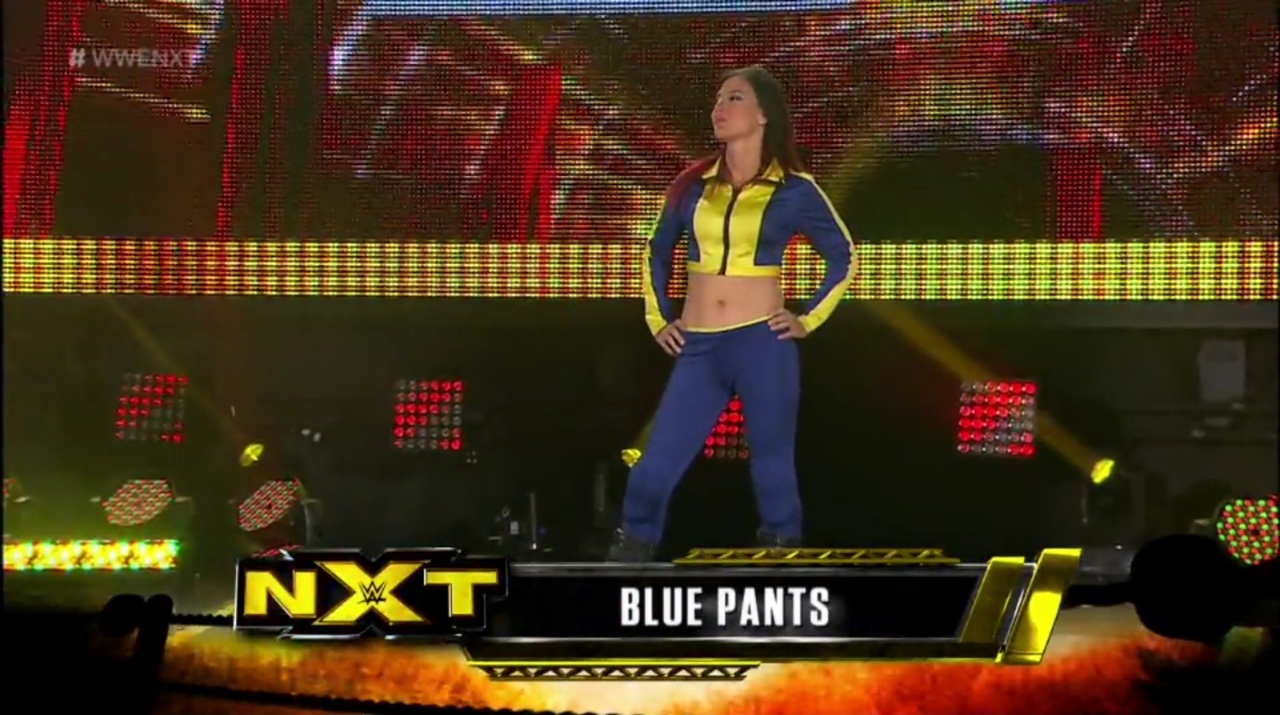 Mick Foley spent years breaking his body in the indies, but he became a superstar when he put a sock on his hand.

Steve Austin barely avoided being called the “Ice Dagger”, made fun of a bible passage at King of the Ring, and people had “Austin 3:16″ signs in the audience the next night.

You can spend weeks pushing someone, but another performer can say something in the ring, or do a move in a weird way, and the fans will pull them to their collective breast and never let go.

So is the tale of Blue Pants.

Leva Bates has been doing journeyman work in the indies for some time, establishing a solid reputation.

So one day the gang from WWE’s developmental brand NXT gave her a call, asking her to come by as do a stint as “Enhancement talent”, better known as “a jobber”, even better known as “the guy paid to lose the match”.

She was set to face Carmella, a new member of the Women’s Division, newly teamed up with hot tag-team Enzo Amore and Colin “Big Cass” Cassidy, a pair of old school NYC paisan tough guys.  Leva’s character didn’t even have a name, so Cass took a look at her bright blue ring gear (actually a cosplay outfit inspired by X-Men regular Kitty Pryde) and introduced her as “Old Blue Pants”, hailing from “The back of the clearance rack”.  She didn’t have an entrance theme – Cass just hummed the theme to The Price Is Right.

And that’s when things got weird.

Yes, she lost the match. Maybe some of the educated wrestling fans in the audience recognized her, maybe they just felt like being silly.  But they watched her smiling, peppy attitude, the “I’m just happy to be here'” smile plastered across her face, watched her deliver solid moves, and decided she was the one to watch.

So she came back a couple weeks later, to lose again to Carmella…and the cheers were even louder. By the third visit, she DID have an entrance theme – a recording of Cass humming the (no longer quite, for copyright purposes) theme to The Price is Right.

And the place exploded.

This day-worker was getting bigger pops than the contracted superstars.  And everybody was loving it.

Leva’s made a few more appearance on NXT over the past few months.  She’s yet to win another match, but there’s a point where you’re so over with the crowd you don’t need to win, they’re just happy you showed up.

So, exactly how big a splash is Blue Pants making?  Would this article in Rolling Stone answer your question?

She’s everything wonderful about wrestling, and more importantly, wrestling fans. We’re an odd crowd – we don’t often engage in the hooliganism you see in other “real” sports. Indeed, sometimes the fans will go to great lengths to make sure a five-year-old fan at her first show gets to meet her favorite wrestler. And we don’t always do what the marketing department want us to.  And the smart company will know when to cut bait and go where the fish are biting.

Just this week, WWE elevated three of NXT’s best women wrestlers to the main stage at Monday Night Raw.  Charlotte (daughter of legend Ric Flair), Becky Lynch, and current NXT women’s champion Sasha Banks premiered on RAW with a bang, laying waste to the current stable of WWE “Divas”, as the women are branded.  And true to form, they ripped the place up.

Now, when wrestlers move from the “Farm league” of NXT to the main roster of WWE, two things happen. One, there’s a deep and abiding hope that they won’t get lost in the much larger pool of the main roster.  But it also means a new opportunity for the folks in NXT to move into the limelight. NXT has a great roster of women, including the ever-perky Bayley, the aforementioned “Queen of Staten Island” Carmella, and more in training, ready to make their premiere.

Is this a chance for Leva to make the move to regular talent?

If she does, I’ll cheer till I’m blue in the…

(*) OK, we know what the REAL first rule of pro wrestling is, but work with me here… 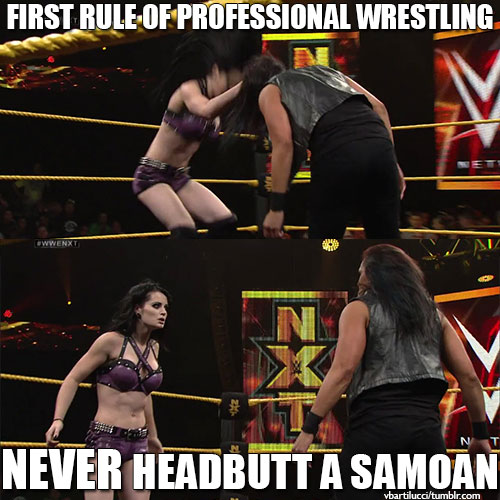 Leva’s youtube channel is home to her show The Geek Soapbox, where she dishes on comics and video games.