Geek Culture, unlike other passion businesses like sports or music, affords fans the opportunity to collaborate with fellow fans and rub elbows with professionals. I’d argue that it’s unique to this industry.

For example, music fans would find it difficult to imagine playing with Mick Jagger or Sir Paul McCartney. Oh, you might see them in concert, but to really spend time with them probably isn’t going to happen.

Likewise, even if I was a big football fan, I couldn’t realistically plan a way to spend quality time with an NFL Superstar. I did briefly meet football legends Larry Czonka and Rocky Bleier back in the 70s, but hey, that was the 70s.

But Geek Culture is different. There are so many opportunities for fans to meet their favorite creators. Like super hero movies, comic conventions are sprouting up just about everywhere.

With all these new conventions, and the inevitable competition for available weekends, I’m thrilled that our invitations to talent for Syracuse’s Salt City Comic-Con were so well received. This show has quickly developed a very impressive guest list. I anticipate it will be a fantastic opportunity for all kinds of fans to meet many of their favorite folks. 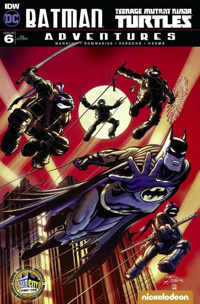 The legendary Neal Adams will be one of the creators attending. He’s a guy who’s been contributing groundbreaking art for many years. He’s also been a trailblazer – with his own entrepreneurial efforts and on behalf of creator’s rights. He seems to love conventions. He brightens up with a big smile and genuinely enjoys meeting his fans.

For this convention, Adams created a variant convention exclusive. The cover to this comic showcases Batman, the Teenage Mutant Ninja Turtles and (for the first time on a comic cover) Syracuse’s iconic Niagara Mohawk building.

I’m a big Batman fan from way back, so collaborating with Neal Adams, IDW, DC and the convention to create this Batman cover was really fun.

The more I thought about it, though, this was fun because it wasn’t really a Batman cover. This was going to be, essentially, a Brave and the Bold cover. B&B, as we called it back in the day, was a long-running comic series showcasing Batman with all his super hero pals. It was always an engaging read and was a strong seller for DC as well.

Neal Adams worked on many of the early issues of B&B, but he has always been good at team-up covers. He’s great at capturing diverse characters and making them work together. 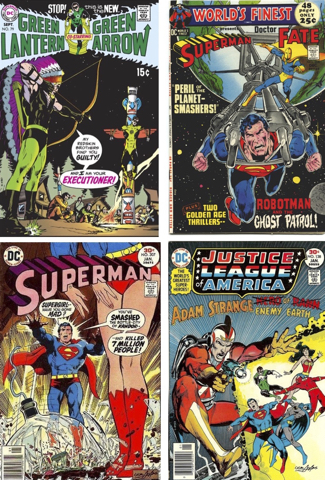 Neal Adams has also illustrated quite a few Marvel Team-Up covers to, as you can see on the top of this column.

All this got me thinking, “What would this special Batman/TMNT cover have looked like if it was published in the 60s or the 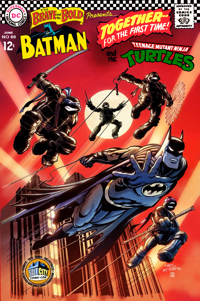 70s?” My Captain Action business partner, Joe Ahearn, brought my ideas to life with a faux Brave and the Bold 60s cover:

We then took it one step further and created an imaginary cover with a funky 70s vibe:As a marketing consultant, I collaborate a lot. Collaborations are fun – be it on work projects, fan projects or even comic book covers. Especially comic book covers, now that I think about it 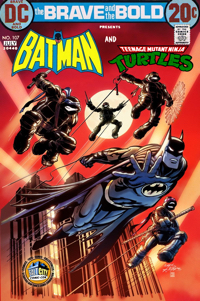 And if you like “Imaginary” team-up covers, might I recommend the clever SuperTeamFamily: The Lost Issues site at https://braveandboldlost.blogspot.com And for more information on that Batman/TMNT variant, just check out SyracuseComicCon.com .