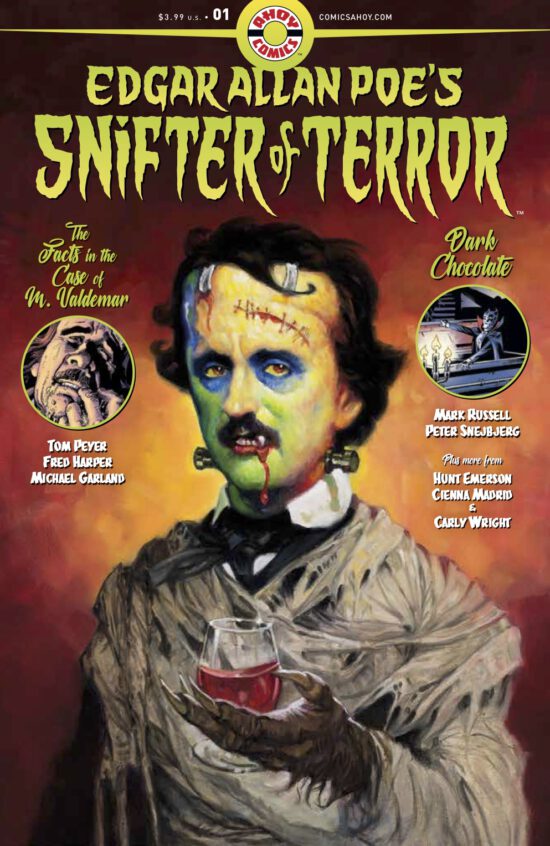 A few years back, the idea was that every new comic publisher would establish a cohesive interconnected universe.  Every one of their comic series would be just one part of a larger grand tapestry.

Since it burst onto the scene, AHOY Comics has boldly said they want to make every comic different and surprising.   They certainly deliver on that promise with Edgar Allen Poe’s Snifter of Terror #1, available today in stores right on time for Halloween.

This comic is witty, creepy, gross …and so much fun. It’s packed full of content that, like a rotting corpse, it seems a little bloated. But in a good way.

The first story- and adaptation of Poe’s “The Facts in the Case of M. Valdemar” – is grim stuff. Tom Peyer opens the story with Poe serving as our horror host. But there’s so much fear and self-loathing. Just when you think it’s too far over the top, it goes over the top again. This chilling story is also an excellent tool for those dieting and seeking appetite suppression tools.

And no sooner is it finished that Edgar Allen Poe again takes center stage to introduce, again in a very unpleasant manner, the second story.

This is the one that really shines for me.  At first glance, “Dark Chocolate” looks like a straightforward vampire story. But in reality, it’s a satirical farce of everything that’s near and dear to every kid who grew up watching Hammer monster movies and eating cereal for breakfast.

Mark Russell, who’s recent Flintstones series for DC Comics has been an unexpected, breakout hit, delivers a story that’s sweetly surprising on so many levels at the same time. It’s been too long since I’ve read a comic story by artist Peter Snejbjerg, and I worry I’ve forgotten just how talented he is.

The comics are rounded out by other features. Included is a short gag comic featuring Poe and a humorous Interview with Mark Russell. However, the poem “The Scallop and the Barnacle” by Celia Madrid is the one not be missed. It’s a grisly tale told with a dash of gallows humor and inappropriate language. Not what I was expecting, but so happy to have read it.

Next issue looks great too. The cover is very much in the lines of the “Attack of the 50 Foot Woman”, but starring Edgar Allen Poe in that iconic pose, of course. It’s nutty, silly and kooky – so it makes all the sense of the world for this comic.