Looks like I picked the wrong week to quit sniffing glue.

Just when I decided that maybe DC’s “Rebirth” might possibly be worthy – yes, I know, I had the same hopes for Batman v Superman – the other shoe dropped. Back in the 1990s I perceived DC as a centipede, with (obviously) 100 shoes to drop. Now, I’m thinking millipede.

In case you haven’t heard, DC decided to “reimagine” (lord how I hate that word) the classic Hanna-Barbera characters. Sort of like what Archie Comics just did with Archie but, in this case, totally needless.

I have little if any strong attachment to the H-B characters. Even as a kid I knew cheap, shitty animation and sub-standard writing. I loved Rocky and Bullwinkle, which employed even cheaper animation, but after mildly enjoying the first season of The Flintstones I decided life was too short – I was 10 years old – and there were so many Looney Tunes to watch and re-watch. I stuck around long enough to realize Betty was hotter than Wilma and how the hell that little wiener Barney landed her was beyond me. But I digress. 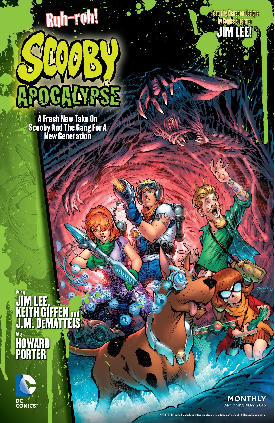 Flash forward to about 1994. I just got my DirecTV wired up and I was ready to rumble. Cartoon Network, Turner Classic Movies, Comedy Central – my local cable company had none of that stuff at the time. Sitting next to me was my daughter, who was about 19 at the time. We surfed around and landed on Cartoon Network. Adriane went nuts. “Scooby Doo! Scooby Doo!! Don’t change the channel!!!”

Like the other H-B stuff, Scooby-Doo held no attraction for me. In fact, I thought it was an insult to both dogs and to hippies. But Adriane was so enthusiastic and I was so enthralled by the digital broadcast that I stuck with it. It was one of those sort-of feature length crossover movies; I think the one with the Three Stooges. Or Batman and Robin. Same difference.

Fine. There’s nothing that says I have to like it, and those cartoons were more boring than they were rotten. Every generation gets to have its own without the so-called adults pissing on their pleasures and I enjoyed sharing Adriane’s youthful enthusiasm.

(However, Adriane’s all growed-up now and is an editor here at ComicMix. She has the privilege of editing my copy, among others. With great power comes great vengeance. Nonetheless, upon reviewing this column she said “Feel free to point out Adriane was disgusted by the art when it was released in January, worse than she was by Freddie Prinze Jr’s dyejob for the live action movie. Apparently being a grown up means Warner Bros. shits on your childhood in new ways every 15 years or so.”). Mike often wonders where Adriane got that third-person bit.)

But now, just as DC claims to have learned the folly of incessant reboots such as The New 52, comes this.

They’re redoing the H-B characters. Rebooting them. Modernizing them. Making them relevant to a young audience that, quite frankly, does not see the comic book medium as relevant.

The idea that Keith Giffen, Marc DeMatteis, Howard Porter and Jim Lee are doing Scooby Apocalypse gives me hope for an entertaining comic book, and on its face it seems like a great idea for a parody. But as the newest incarnation of “the real thing?” It’s like dumping Superman’s red exo-trunks: they’re messing with the American flag.

I assume Jonny Quest will soon be revealed as a weed runner. Hey, Shaggy had to score from someone, and Top Cat really couldn’t be trusted.

Maybe we’ll get lucky and Scrappy-Doo will get hit by a runaway garbage truck.