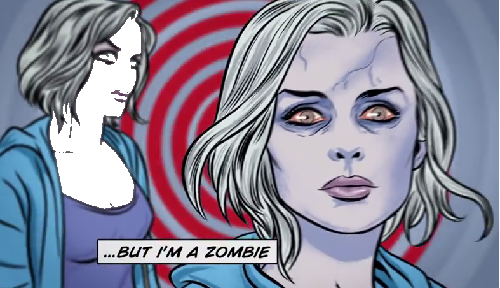 It’s still astounding to me how an art form like comics can, on the one hand, celebrate the creative contributions of individuals while, on the other hand, leave behind a tragic history and rotten track record for its treatment of these creators. The debates on this topic continue to rage on. Recently the appropriate level of recognition for a particular creator, who has long since shuffled offstage, dominated the online comic conversation.

As part of an ongoing series exploring today’s creators’ reactions to their comic creations’ successful crossovers into other media, I caught up with Mike Allred, who along with Chris Roberson co-created Vertigo’s iZombie. It’s a hit series on the CW network and has been renewed for a second season. Fans of Allred have always been delighted with his rich body of work: his brilliantly independent Madman, his innovative, genre-busting X-Statix, and more recently, his quirky FF series and Batman 66 covers. In this interview, I explore his involvement in and thoughts on the popular iZombie series. 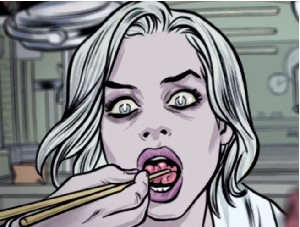 Ed Catto: Comics has a sad history of many creators not fully sharing in the economic success of their literary creations. Fans know the tragic stories of Siegel and Shuster, Gerry Conway has discussed issues concerning creator credits of certain DC characters, and Wally Wood’s contributions to the Daredevil character and mythology have been debated. Given today’s realities, do you think current creators are better prepared to protect their own rights, or is it still the same old story?

Mike Allred: Everyone always tries to make the best deal for their own interests. On all sides. It will always be that way. But it’s up to the individual to protect themselves. Despite all the history to learn from, there will always be bad deals. I was lucky with my first major success being something I completely created and own myself.

I couldn’t get a gig with the “big two” starting out, so I was content to create my own worlds. That brought me opportunities and the freedom to choose where, when, and how I play in the wonderful world of comic books. I’m as big a fan as anyone, so I get a big kick out of playing with established company-owned characters, but I do so with eyes wide open knowing that I’ll have to fight for ownership of anything original I bring to the table. I balance that with my own creations. It’s always been clear to me what is mine and what rights I have to my sole creations. Collaborations get a bit more complicated and every contract has its own challenges.

I’m keenly aware of the shoulders I’m standing on and how I’ve benefited. Thankfully, so far, I have very little to complain about personally. 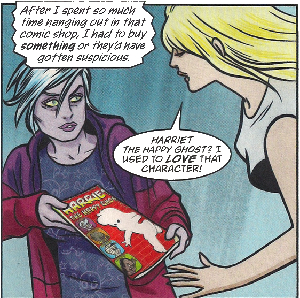 EC: Back when you were developing iZombie and the look of the comic series, what were you trying to create and what were some of the challenges you found working on a zombie/horror story?

MA: Chris Roberson and I were wanting to do something different, something askew. We were eager to do contemporary takes on classic monsters. Priority one for me was to make an attractive, appealing lead character who also happened to be a zombie.

EC: Were you pleased with how the comic series turned out? And what would you have done differently if you could go back and do it over again?

MA: I’m extremely proud of it. There were two paths. One was sticking with the “brain of the day” template and have each new brain become a new storyline, and the other was going epic and blowing out our world, which obviously is the path we took. There was a part of me that kinda wished we’d stuck with the more intimate stories involving the people whose brains were eaten, but since the TV show picked up that baton I’m completely satisfied on every level. 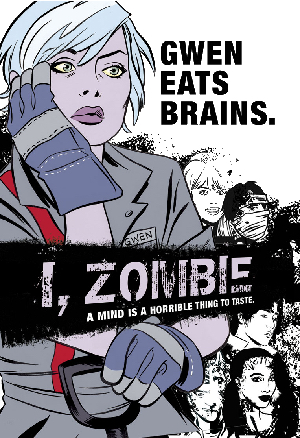 EC: How did you find out that your iZombie concept was going to be a TV series? How long did it take to reach network television and can you tell us some of your reactions and thoughts along the way?

MA: I’m pretty sure Shelly Bond at Vertigo told me first. She was very much a collaborator in every way on the series. It simply wouldn’t exist without her. Geoff Johns gave me a call too around the same time. He had all the details. It all happened very quickly.

Initially I was a bit perturbed with the changes. Most especially Gwen’s name change to Liv. But I’m a big boy and know that there is no such thing as a completely faithful adaptation of any entity from one medium to another. My immediate concern was that it was good and something I’d be proud to have my name on. Once I saw that Rose McIver was hired as our zombie girl and how the production bent over backwards to make her look how I designed her, my fears started dropping away. When I saw the completed pilot it felt exactly like falling in love. And now I’m thrilled with virtually every creative choice that has been made. Rob and Diane and are the best. All the writers are killin’ it in the best way. Every cast member is the coolest. And Rose is a dynamo rocking a showcase of personality quirks. I feel crazy lucky. This could have gone bad in so many ways and it’s done the exact opposite. 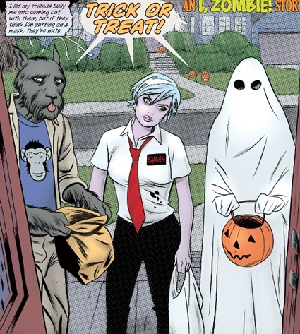 EC: The opening credits of iZombie showcase your artwork. Can you tell us a little about how that came to be and the process behind it?

MA: Rob and Diane thought it’d be cool and wrote it up. I’ve always loved the animated opening titles to the 60’s Batman TV show, so I jumped in with both feet. I drew all the images that they asked for and more, wanting to make sure they had more than needed. I even drew the spiral by putting a piece of paper on a turntable and moving my brush from the center out. Laura (Allred, Mike’s wife and an award-winning colorist) then colored all the illustrations and various layers separately which were then edited to the theme song and… Ta-Dah!

MA: At this point I’m simply sitting back and enjoying the show for the most part. I’ve never been busier so it’d be difficult to increase my involvement, but I have a nice rapport with everyone and may throw in more if we score a third season. 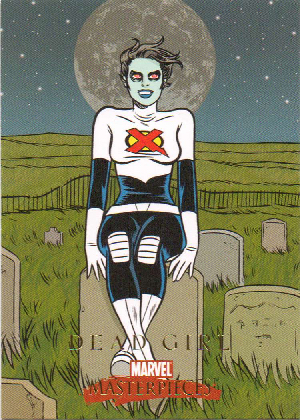 EC: Are you pleased the show has been renewed for a second season?

MA: Over the moon!

It’s not lost on me how difficult it is to get anything at all produced. My Madman property has been optioned and in various degrees of production since 1995.

So, we leapt the first major hurdle of getting it produced, then on the air, then well received. Lots of great stuff doesn’t find an audience, let alone get a second season. We’re very, very happy.

EC: On Free Comic Book Day, the fans at one of the stores I stopped by started raving about your work on Silver Surfer. The fans collectively said they enjoy the new character you and Dan Slott created, Dawn Greenwood. But is there a different thought process that now goes into creating a character for a company? 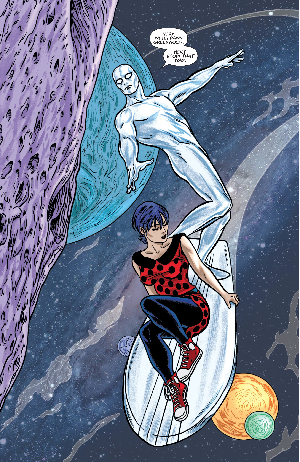 MA: There is and there isn’t. I know going in that Dan and I will always have bragging rights on what we’ve created to support a legendary Marvel character. Here it is largely about compensation. I go in knowing that I’ll have little to say in what happens with my creations after I walk away. So it’s important for me to feel creatively satisfied, which I am. I hold no illusions that I’ll be self-publishing a Dawn Greenwood mini-series. It is what it is. I get a sweet paycheck and get to play on this big wonderful stage I’ve loved my whole life. If I want to work on purely creator-owned material I can do that too whenever I want. It’s how I started out, so I’m completely aware of all the circumstances.

EC: What’s coming up next for you, Mike?

MA: I’m having a total blast working with Dan on Silver Surfer, so I’m gonna ride that wave all the way to shore. I’m always planning and working on the next Madman special, where I do my most personal work, as Frank Einstein is pretty much me. And I’ve co-created an all-new Vertigo series, which will be announced at the San Diego Comic-Con.

EC: Last one: Who would win in a fight: iZombie or X-Statix’s Dead Girl?

MA: They would never fight. They’d have a nice lunch and then go to the movies.