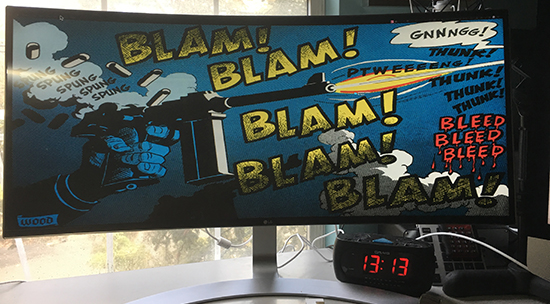 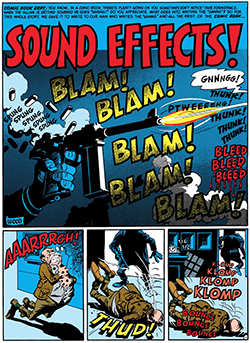 The most ridiculous question I’ve asked myself all week is, is this “the greatest comic book story ever?” Who the hell knows? The answer to that question is in the mind of the beholder, and in the case of my mind, well, I change my mind so fast I voided the warranty long ago.

But… this one is damn close.

When I was but a tiny brat, I fell in love with Mad Magazine. I copped a copy from my sister’s comic book pile, read it, was completely enthralled, and I coerced my mother (I was seven years old at the time) into buying me the then-current issue, #40. By the end of the day, I got her to get me a subscription. 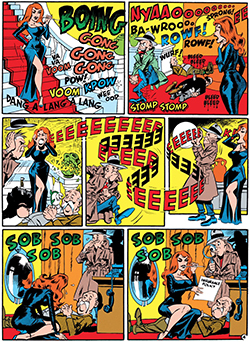 Later on, my sister started dating this guy who was about eight years older than me, my sister being only seven years older. He became aware of my passion for Mad and asked me if I knew the original Mad was, in fact, a comic book. I looked at him as though he had just morphed into Fin Fang Foom. What? A comic book? Yeah, even then I was a serious fanboy. He brought over a copy of Mad #20, one of the last before it became a magazine, and I nearly fainted. Figuring the best way to my sister’s heart was through her brother’s passion, he gave me the issue. It was my first EC comic, and I instantly became a post-event EC Fan-Addict.

In an unrelated incident a couple weeks later, my sister dumped him. I remain grateful, but, well… c’est la vie. 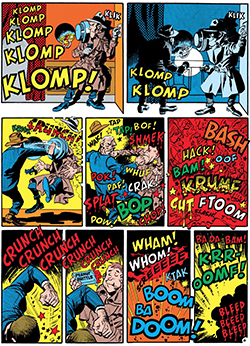 The second story in Mad #20 was titled “Sound Effects!,” and it was drawn by Wally Wood. By this point I had consumed the first three Mad reprint paperbacks and Woody had become my favorite comics artist. At the time I didn’t know I had joined a very, very big club. I didn’t know the writer’s name – of course it was Harvey Kurtzman – but I admired his ability to tell a very clever, very funny story that satirized the very medium in which he was working, that brought out the best in one of the all-time best comics artists… and was written entirely without any dialog whatsoever. One can argue the last panel, but… why? I’d reprint it here, but that would be a spoiler.

Self-satire is tough. It was a strong element in what Kurtzman called “chicken fat humor” which was prevalent at the time on teevee in such shows as Sid Caesar (he did several) and Steve Allen (he did a lot more than just several). All three of these guys were masters at it – and both Caesar and Allen later wrote introductions for sundry Mad reprint books. 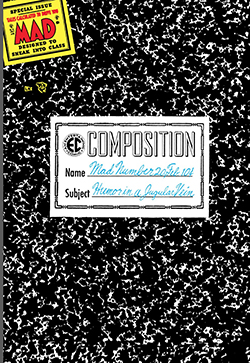 I’d take this opportunity to praise Marie Severin’s color art, but if you’ve ever seen an EC comic book or her later work at Marvel, there’s no need. She was one of the absolute best, in a very crowded field of wonderful colorists. Ben Oda’s lettering is outstanding, and, as you can see, it is the very point of this story.

Together, Kurtzman, Wood, Oda and Severin produced magic. The most amazing aspect of this particular saga is, “Sound Effects!” is one of the very, very few Mad comics stories that was not reprinted in the Mad paperbacks of the time. I think it would have worked; obviously, “the usual gang of idiots” did not share that opinion.

“Sound Effects!” was reprinted in the Mad Archives as well as in various reprint books, and I know I am not alone in having them all. Hey, I’m a fan. If you have the desire to procure but one, I recommend you start with Mad’s Original Idiots Wally Wood. It was published way back in 2015 so it should be fairly easily accessible. $15 (at Amazon, at least) for 176 pages of Wally Wood and Harvey Kurtzman is one of the best bargains in comics, and it will be one of the most entertaining experiences in your life.

Next week: Turning off the lights. Or shooting them out. It will be an interesting week. Happy Thanksgiving!