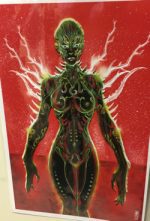 Science Fiction is a term that means a lot of different things to a lot of different fans. When I was kid I thought it kind of meant Star Trek and Lost in Space, Bradbury books and the Twilight Zone episodes that included aliens. Of course, it’s so much bigger than that. There are subgenres and all kinds of slivers of fandoms that are populated with bazillions of fans. And Star Wars, of course, has just about transcended the entire genre and become its own thing.

So it’s was all the more interesting that a local art exhibit chose to focus on the earliest incarnation of science fiction. It’s called “Fun in Space: An Homage to Pulp Science Fiction.”

Pulp Science Fiction is cheesy and brilliant all at the same time. Pulps often sported lurid and garish covers aimed at adolescent males. On the other hand, so many authors, like Ray Bradbury, H.P. Lovecraft, Edgar Rice Burroughs and Robert Heinlein started telling their endearing and enduring tales in the pulps. 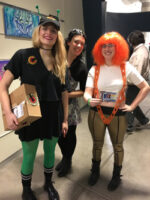 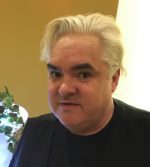 Lurid and garish are two of my favorite adjectives, so it’s natural that I just love old pulp covers. They’re silly, naïve and needlessly sexualized. They are also lovely and skillfully rendered, all with an intense sense of urgency and excitement.

The show’s curator is Steve Nyland. He’s enthusiastic and focused, able to make something like this art show happen and able to convin 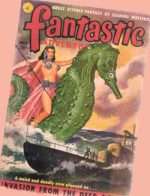 ce all the powers that be that it should happen. Nyland told me about how he developed a love for pulp science fiction stories as a kid and it’s never left him.

One of my favorites pulps has been an old issue of Fantastic Adventures that showcases the story “Invasion from the Deep” by Paul W. Fairman. The cover shows a submarine crew astonished as a giant – and I mean giant – undersea princess is bursting through the waves riding an equally giant seahorse.

At the heart of it all – this “Fun in Space” exhibit channeled that frenetic energy. My favorite piece is a recreation of an old issue of Fantastic Adventures featuring the unforgettable story, the Justice of Tor. (Well, OK, that story is actually completely forgettable, but the cover is gorgeous.)

There is so much great artwork here that channels the charm of old science fiction, especially one evoking an Al Feldstein EC Comics cover and another with mash-up of iconic sci fi characters. I was nice to see Spock dancing with Princess Leia. 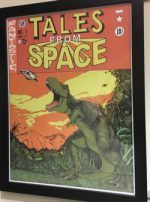 And cosplay is everywhere! Even at opening night for a Science Fiction art exhibit in downtown Syracuse. On hand were clever cosplayers, celebrating the many aspects of the genre.

The contributing artists stretched a bit too – with some cool sculptures and painted sneakers and furniture.

I wish I could refrain from corny puns and not write that the opening was “out of this world,” but it was a fun, upbeat celebration by a passionate bunch of talented artists for like-minded geeks.