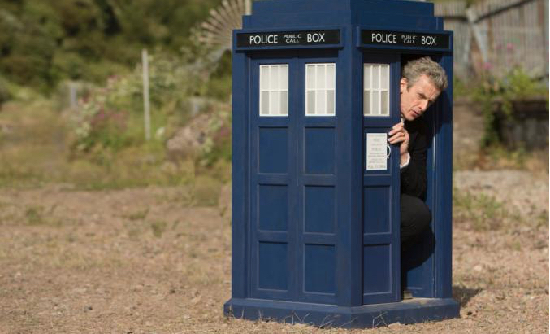 So here’s a rundown of my opinions of random episodes in the lives of the Doctor.

There have been a number of emotion-walloping episodes since the reboot 10 years ago – see below – but The End of Time “had me at hello.” Much of the credit goes to the absolutely smashing and brilliant Bernard Gribbins as Donna Noble’s grandfather, Wilfred Mott; there were so many moments, but two stand out for me: Wilfred’s tearful pleading and urging to the Doctor to kill the Master and save himself – “Now you take this, that’s an order, Doctor. You take the gun, you take the gun and save your life. And please don’t die, you’re the most wonderful man on earth! I don’t want you to die!” – and his final salute to the Gallifreyan at Donna’s wedding.

Don’t worry; of course I’m not ignoring David Tennant. His acting chops came to the fore here, from his rage and bitterness towards Wilfred, the man he had just told he “would be proud if he were my dad” for being the instrument of his end – “Cause you had to go in there, didn’t you? You had to go in there and get stuck, oh yes. ‘Cause that’s who you are, Wilfred. You were always this, waiting for me, all this time…But me…I could do so much more…So much more!…But this is what I get. My reward…But it’s not fair!” – to his last poignant visits, his last literally life-changing gifts to the people who had journeyed with him through this regeneration: Martha and Mickey, Sara Jane, Donna, Captain Jack, and, of course, the woman he loved, the woman he could never have, Rose Tyler. His last encounter with her, that last promise of “I bet you’re going to have a really great year” was both an acknowledgement that, because of WWTWS, for Rose it was just starting, but that for him, it was truly over. And yet… “I don’t want to go.”

Best Exit of a Companion

Or, in this case, companions. The Angels Take Manhattan rated a close second as “Most Heartbreaking,” as Amelia Pond, the “girl who waited,” became the “woman who refused to wait” – “It’ll be fine. I know it will. I’ll be with him like I should be. Me and Rory together.” – grabbed at the chance of a life in the past with the love of her life, her husband, Rory Williams (synchronally speaking, “the man who waited”). Yes, it broke Matt Smith’s Doctor’s hearts, but still she managed to let him know they were okay with no regrets, trying to offer him some comfort and reminding me that she and he were not over, because of all the WWTWS:

“Hello, old friend, and here we are. You and me, on the last page. By the time you read these words, Rory and I will be long gone. So know that we lived well, and were very happy. And above all else, know that we will love you, always. Sometimes I do worry about you, though. I think once we’re gone, you won’t be coming back here for a while, and you might be alone, which you should never be. Don’t be alone, Doctor. And do one more thing for me. There’s a little girl waiting in a garden. She’s going to wait a long while, so she’s going to need a lot of hope. Go to her. Tell her a story. Tell her that if she’s patient, the days are coming that she’ll never forget. Tell her she’ll go to sea and fight pirates. She’ll fall in love with a man who’ll wait two thousand years to keep her safe. Tell her she’ll give hope to the greatest painter who ever lived and save a whale in outer space. Tell her this is the story of Amelia Pond. And this is how it ends.”

Hmm, here’s a WWTWS question: Did little Amelia Pond wait so long – 12 years! – because the Doctor was off having adventures with the grown-up Amy and Rory? Was everything that we saw actually a repeat of everything that had already happened?

Best Return of a Companion

Sarah Jane Smith in “School Reunion.” Elisabeth Sladen was my first companion (with Tom Baker), and for me she set the standard – and I believe for everyone who followed her. She broke the mold of what had come before. Rather than transcribe their meeting, here’s the link to the YouTube vid. And in honor of the late Ms. Sladen, here’s a link to her.

Best Introduction of a Companion

Jenna Coleman as Oswin Oswald in “Asylum of the Daleks” – or is that as Clara Oswin Oswald in “The Snowmen” – or is that as Clara Oswald in “The Bells of Saint John?” Yep, it’s “The Impossible Girl,” who has saved the Doctor in all his incarnations since the very beginning, when she guided him to the right TARDIS: “Sorry. But you were about to make a very big mistake. Don’t steal that one; steal this one. The navigation system’s knackered, but you’ll have much more fun.” Here I am proud to announce that I guessed the identity of the Doctor’s (upcoming) new companion in a phone call with Editor Mike, even though you tried to tell me I was wrong, Mr. Gold. Yes, you did. No matter how you try to deny it, it is a fact.

Best Confrontation between the Doctor and the Companion

I’m watching it rerun right now. Clara Oswald, in the penultimate Season 8 episode, “Dark Water,” demands that the Doctor prevent her boyfriend, Danny Pink, from being killed in a car accident, blackmailing him by throwing the keys of the TARDIS, one by one, into the lava pit of an active volcano…sorry, I have to stop writing for a second…

Make that “Characters,” with an “s.” Im-not-so-ho, the Paternoster Gang: The Silurian lizard lady, Madam Vastra, (Neve McIntosh), her human wife (who masquerades as her maid), Jenny Flint (Catrin Stewart), and the “Mr. Potato Head” Sontaran Strax (Dan Starkey), their butler. Hah! I bet you thought I was going to say River Song.

Bravest Loss of a Supporting Character

Danny Pink, the soldier, killed in a car accident, turned into a Cyberman by Missy, and yet rising above his programming to turn certain defeat into certain victory in “Death in Heaven.”

Kate Stewart’s assistant, the asthmatic Osgood (Ingrid Oliver), became an instant fan favorite when she was introduced in the 50th anniversary special, “The Day of the Doctor,” sucking down on her inhaler and wearing the Fourth Doctor’s (Tom Baker) scarf, which she either knitted herself or “borrowed” from the archives hidden in UNIT’s Tower of London headquarters. We caught up with her in Season 8’s finale, “Death in Heaven,” in which she’s still sucking down on that inhaler, but now wears the Eleventh Doctor’s (Matt Smith) bow tie – again, she either went out and bought it or “borrowed” it from UNIT’s archives. But our reunion with her was brief, because The Mistress, a.k.a. Missy, The Master’s female incarnation, kills her.

But wait! It has been revealed that Osgood will be back in Season 9! How? Is she really the Zygon impersonator from “The Day of the Doctor,” or will be more WWTWS?

John Simm, especially in his last arc (“The End of Time.”) In his portrayal as the Doctor’s “Professor Moriarty” in “The End of Time,” Simm heartrendingly played to perfection the other side of the poor, wrecked mind of The Master; we got a glimpse of “what might have been.” Instead, it was revealed that The Master was a pawn of the Time Lord President Rassilon (Timothy Dalton) – who was responsible for the drumbeat in The Master’s head that drove him mad and onto the path of his many lives. Sorry, Missy fans, she’s okay, but I’m just not that into her.

“Death in Heaven.” Im-not-so-ho, this one had everything. Life and death, hope and resignation, love and hatred. There were final reunions and final sacrifices. And a season-long question was answered – “Am I a good man?” But the best part? Brigadier Sir Alastair Gordon Lethbridge-Stewart finally got that salute from the Doctor.