The Law Is A Ass #452: Congress in the X-osphere Had Bad Deport-ment

When is a person not a person?

No, not when they are ajar.

The answer to the question was at the center of X-Men Gold Vol 2, #9 , “Kitty Goes to Washington” Part 1. (By way of a quick digression, that title is derived from the classic Frank Capra movie Mr. Smith Goes to Washington, which is not a bad little movie as opposed to its remake Billy Jack Goes to Washington, which most definitely is.) (By way of another quick digression, this story was called Part 1, even though it doesn’t end in a cliffhanger and the very next issue was Part 1 of a completely different story. Proving that Marvel finds X-Men continuity as confusing as I do.)

Why did Kitty Pride, leader of the X-Men at the time of this story, go to Washington? To appear before a Congressional committee to speak against a proposed Mutant Deportation Act. What was the Mutant Deportation Act? The story didn’t say and researching on the online Marvel Database didn’t help. It’s entry on the bill said, and I quote, “The Mutant Deportation Bill was a bill voted on by Congress.” Even Captain Obvious found that answer to be a little bit on the nose. As I don’t want to spend the rest of this column speculating on what the act said, I will assume it said the United States could deport all mutants.

To address the problem we must first determine: what is deportation? No, it’s not one of ESPN’s foreign-language channels. According to the Supreme Court, “Deportation is the removal of an alien out of the country, simply because his presence is deemed inconsistent with the public welfare,” Fong Yue Ting v. United States, 149 U.S. 698 (1893).

If Congress were to decide that the presence of mutants in America was “inconsistent with the public welfare,” that wouldn’t be very nice. It would be singling out a class for unequal treatment simply because of how they were born; as if Congress chose to deport people based on whether their skin was the wrong color, their eyes were the wrong shape, or that they couldn’t throw a wicked slider. But let’s face facts, mutants in the Marvel Universe have had their own line of comics and cross-overs for decades. Mutants couldn’t rack up all those sales if they didn’t attract trouble, mayhem, and more property damage than an 8.7 earthquake during an F5 tornado. Yes, mutants attract trouble the way a “Wet Paint” sign attracts fingerprints. So there is a case that could be made that their “presence is inconsistent with the public welfare.”

I’m not saying that I agree that mutants should be deported simply because they’re mutants. In point of fact, I don’t think anyone should be deported because of their genetic make-up. But I also don’t have any say in the matter. I’m not in the Marvel Universe Congress. Hell, I’m not even one of its constituents. Last time I looked there weren’t any mutants, cosmic-radiated beings, or Fin Fang Fooms running around my backyard.

However, even if Congress thought it had the constitutional authority and the voter mandate to deport all mutants, it still couldn’t pass a law deporting all mutants simply because they were mutants. Sure Wolverine or Storm or Colossus could be deported. But not Kitty Pride or Cyclops or Iceman or Jean Grey. (Depending on whether Jean Grey is alive or dead now, I can never remember.) See, Kitty and the original X-Men are natural-born US citizens. You can’t deport a citizen, only an alien or a foreign national.

Congressman Baker told Kitty that it could deport all mutants, including US citizens, because mutants aren’t humans, so the protections of the Constitution didn’t apply to them. I say that argument has more bunk than an Army barracks. If you are writing a law that calls for someone to be deported that someone must be a person for a very simple reason; only people are deported.

You don’t hear of dogs being deported. Or horses. Not even murder hornets. No, you can ship sheep. Or ferry ferrets. And even pack pack mules. But you don’t deport them. Not even sentient creatures like whales or porpoises are deported. They freed Willy, they didn’t deport him.

And that brings us back to our original question, when is a person not a person? The answer isn’t when they’re ajar. But the answer is definitely jarring.

Kitty Pryde and Colossus getting married in X-Men Gold #30

It’s been over thirty years in the making, but it looks like it’s finally going to happen– Kitty Pryde and Peter Rasputin are finally getting married in X-Men Gold #30.

All we can say is this:

The important question, of course: will it be a Jewish wedding?

No I’m not saying the idea of publishing X-Men Gold was stupid. I’m saying that something that happened in X-Men Gold #1 was of the so-monumentally-stupid-that-it-could-never-have-seemed-like-a-good-idea variety.

After the X-Men Gold team saved Manhattan from an attack by former Galactus herald Terrax – Why did Terrax attack Manhattan; it seemed like a good idea at the time – they went back to the new Xavier Institute for Mutant Education and Outreach to have one of their relaxing Softball games. They were met by the City Register for New York who presented current X-Men leader Kitty Pride with the invoice for the first six months’ rent and property tax for the parcel of land on which the Mayor of New York agreed to let the X-Men relocate their school. Kitty was shocked when she read the bill. It was for eighteen million dollars. That’s eighteen million. With an eight.

Turns out the X-men relocated the Xavier Institute to the middle of Central Park.

And that’s what was so monumentally stupid that it could never have seemed like a good idea at any time. For both the X-Men and New York City.

Judging from Kitty’s shock at seeing the invoice, I can only conclude she signed the lease without reading it first and ascertaining how much the rent and property tax was going to set the team back. And there is never a time when signing a lease without reading its terms – especially its rent terms – could seem like a good idea.

Thirty-six million dollars a year in rent and property tax isn’t just steep, it’s pushing Sisyphus’ rock up a right angle. Unless every oil sheik and internet billionaire in the world has offspring in need of mutant training or Kitty can get a copyright on the word “The,” I don’t see how the Xavier Institute will ever earn enough money to pay rent and property tax that’s so x-orbitant.

And speaking of monumentally stupid ideas, which we were, who in the Mayor’s office thought it would be a good idea for the Xavier Institute to relocate to Central Park?

Central Park is home to a zoo, a castle, a carousel, a concert shell, several playgrounds, baseball fields, skating rinks, fountains, a boat house, several theaters, statues, gardens, a world-class restaurant, several other restaurants, even more hot-dog carts, jogging trails, horse-drawn carriage rides, a memorial to John Lennon, lakes, ponds, and enough trees to make Robin Hood, his Merry Men, and every dog in the tri-state area happy. It is the fourth most-visited tourist attraction in the world with forty million visitors every year. And this is where the Mayor of New York agreed to put a school that’s attacked so frequently its got a training facility called The Danger Room?

Your Honor, have you heard of “collateral damage?” In case you haven’t, collateral damage isn’t what the 2008 housing bubble burst inflicted when people got their collateral foreclosed on. It’s what happens to innocent people when they’re hanging around major battlefields.

Mr. Mayor, the X-Men have villains with names like the Brotherhood of Evil Mutants, Mr. Sinister, and Apocalypse. These are not nice people. They would think nothing of attacking the X-Men in their home. A home you just allowed them to put in Central Park. If even one percent of those forty million visitors get hurt the next time someone attacks the Xavier Institute, you’ve just opened your city up to about 400,000 lawsuits. I practiced criminal defense law for 28 years and don’t know a tort from a torte, and even I would know how to file the complaints for the class action suits that are sure to follow.

Mr. Mayor, you may have thought renting Central Park to the X-Men was a good idea at the time. You might have even thought it would be a win-win situation. And it will be. For the plaintiffs and their lawyers. 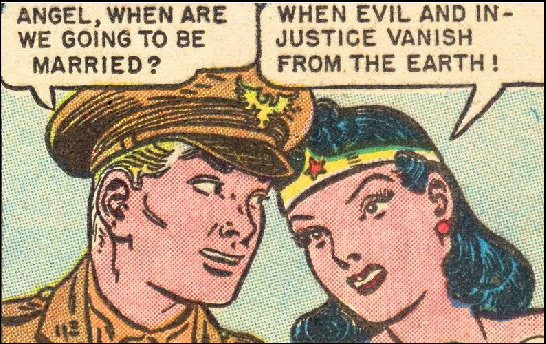 I clicked on her last link.

Are you fucking kidding me?!

Everybody knows about Kim Davis, but how many of you know about Charee Stanley, the United Airlines ExpressJet flight attendant who refuses to serve alcohol because she is a Muslim? The problem was handled a while by the other flight attendants who shared flights with Ms. Stanley; they served the drinks while Ms. Stanley did other duties. But eventually another employee filed a complaint, and ExpressJet suspended Ms. Stanley (administrative leave for 12 months without pay) for not fulfilling her expected duties; if there is no satisfactory resolution by the end of that time period, Ms. Stanley will be terminated. She has filed a complaint with the EEOC (Equal Opportunity Commission).

Newsflash, people. The United States of America is not a theocracy.

So the simple answer to Kim Davis and the flight attendant is “Get another job.”

But is it so simple?

What if a superhero refused to do his or her job because of religious reasons? I have previously stated that I believe that Wonder Woman, for all her stature as a modern feminist icon, is firmly in the anti-abortion, pro-life camp, owing to her own miraculous birth on an island where the usual biological procreation of children is impossible, and has been since the Amazons arrived on Themiscrya. How conflicted would Princess Diana be in upholding Roe vs. Wade? Very, I think.

And let’s say, for argument’s sake, that Kitty Pryde has become shomer Shabbat, which in modern lingo means a Jew who has “returned,” after living an assimilated or non-practicing life, to following the commandments honoring the Sabbath and God as laid down in the second book of the Torah (Deuteronomy), i.e., an Orthodox Jew. Would Kitty be right in refusing to aid the other X-Men in a fight against the Brood if it happened to be a Saturday, the Jewish Sabbath, or Yom Kippur, the holiest day of the year in Judaism, spent in fasting and prayer?

Uh, actually, no. The preservation of life, the act of preserving life, is, in fact, the most important principle of Judaism superseding all others and all commandments. “The Mishna says: “’Whenever a human life is endangered, the laws of the Sabbath are suspended’. The more eagerly someone goes about saving a life, the more worthy he is of praise.” (The Babylonian Talmud, tractate Yoma, page 84b)

So what’s the answer?

I don’t know, but I’m glad I live in a country in which Amendment I of the Constitution states that “Congress shall make no law respecting an establishment of religion, or prohibiting the free exercise thereof…”

And I’m glad I live in a country in which Article III, Section 1 of the Constitution says that “The judicial Power of the United States shall be vested in one supreme Court…”

Despite what Mike Huckabee says.

Kitty and Colossus, sittin’ in a tree… 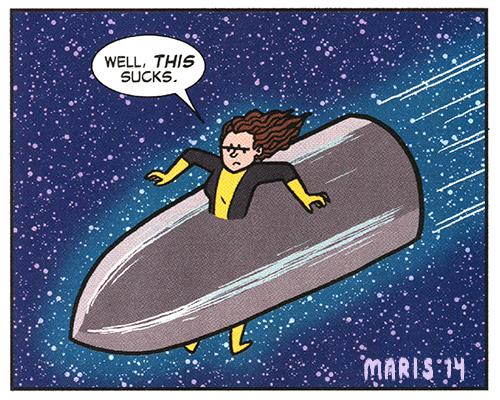 Maris Wicks drew Colossus and Kitty Pryde’s dating history for All-New X-Men #25. GET ON IT. 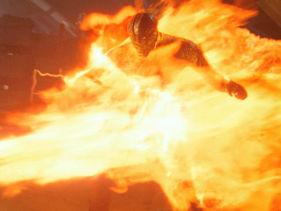 In the future, Kitty Pryde, Iceman, Colossus, Bishop, and many more mutants face off against… well, watch and see.