Dennis O’Neil: Legends of All Time! 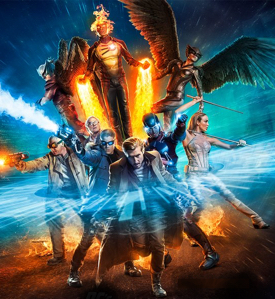 Where might we be? The air is crisp and clean, the ocean before us is deep blue, the whole world seems freshly minted… Oh, of course! We’re somewhere in the region that will come to be called Before the Common Era and we’re watching a group of alpha male-type gentlemen board a sailing ship. Ah, we have it now. The gents are Jason and his pals who will eventually be dubbed The Argonauts, which means that the ship is the Argo, built by a handy chap named Argus and protected by the goddess Hera. They’re preparing to voyage in quest of some golden fleece for reasons with which we need not bother. There we are – everything tied up in a neat package. Don’t you love it when that happens?

But while we were ogling the BCE version of celebrities, the metaphor morphed. What was liquid is now pages, some yellowed and curling, some clean and white and on those rapidly flipping pages… glimpses. There’s King Arthur and the roundtable bunch. (How do we know that this particular king is Arthur? Because we do, that’s how! Now hush.) And there’s Odysseus and his shipmates. And the four musketeers, who, for some reason, are hailed as the three musketeers. (Maybe the seventeenth century French dudes weren’t so good at counting?) And The Shadow with his helpers, and Doc Savage with his and – the pages are crisper and whiter – the Magnificent Seven and the Dirty Dozen and the Justice Society and the Justice League and the X-Men and DC’s Legends of Tomorrow…

Whoa. That last one – it isn’t on a page (yet), it’s on a video screen and I saw it a few nights ago: the latest entry into what’s beginning to seem like television’s Superhero Sweepstakes. What we have here are a number of B-team heroes who, with one exception that I’m aware of, first appeared in DC Comics. (There’s those darn pages again.) They’re united under the leadership of Rip Hunter to combat a giant economy sized threat to the planet and, probably, to ass kick sundry lesser malcontents. They’re not all happy to be part of the team, but that’s okay – we know they’ll be on the front lines when they’re needed. And maybe a bit of bickering will brighten the dialogue – exposition, don’t you know, can be such a bore.

The structure of stories such characters populate is simple and reliable: something threatens the common good, something so formidable that it takes a team to quell it, preferably a team with diverse capabilities to allow for varied action.

Did I mention their… I don’t know what to call it, but let’s settle for “vehicle.” It seems to be a combination airliner, houseboat, taxi cab and time machine, and it is nifty. (Are the toy companies lining up?)

The show itself? Can’t wait for next episode…Well, actually I can, but I will be watching it.

Cozy down on your couch and wait for it: A Supergirl series coming soon – well, in the fall – to a television set near you. And a new superhero on The Flash and what looks like some supering up of already existing character or characters on Arrow and and and…

I’ll bet the corridors of the media giants in Hollywood and New York (and Chicago? London?) are absolutely buzz with plans and proposals for more stories about that congregation who wear peculiar costumes and bash. I think they call it extending the franchise, and it is nothing new. My current favorite example from antiquity is the King Arthur saga which was kind of inspired by rales of a fifth or sixth century British ruler who fought Saxon invaders. (Did he really exist? Was he compounded of several rulers? Let us shrug and get on with it.)

Anyway, it wasn’t until the twelfth century that Arthur’s tales began to be written down and circulated, though some stuff may have been forever lost in the long gap between inspiration and dissemination. There have been adaptations and additions and redaction ever since. Almost certainly, somewhere on this green planet, someone is even now working on an Arthur piece.

That’s my current favorite example of franchise fattening in Days of Yore, but there are others, including the Tom Sawyer books – Tom Sawyer Abroad and Tom Sawyer, Detective – that your English teacher neglected to mention. Heck, even what is by many considered to be the best American novel ever, Huckleberry Finn, could be considered to be an early extension of the Sawyer franchise.

And here we jump over the rest of the Nineteenth Century and a big chunk of the Twentieth and look at comic books, which were in the franchise extending dodge from their earliest days. Like Tom and Huck, Superman and Batman were quite different, but in some ways similar. Superman is a big success and about a year later, voila – along comes Batman. Then the deluge. Dozens – hundreds? – of different-but-similars dotting the newsstands. And witch hunts followed by an implosion. Then, a revival, and here we are, watching superhero franchises being extended – not on cheap paper, but on highly sophisticated electronic delivery systems.

It’s about money, of course. I don’t know if the early King Arthur chroniclers were in it for the coins, but Mark Twain, hassled by money worries for much of his life, certainly had some financial motivation, and so has every professional storyteller since. There are downsides to this propagation of the superhero meme; attraction of creators who have no genuine liking for the material and hence to it badly and hence give others a bad rep; audience difficulty in telling one hero from the other; a dilution of what makes a character unique and interesting; and old-fashioned weariness with the genre.

But I’m of a mind to believe that none of the above guarantees inferior story quality. It’s the recipe, not the ingredients, that’s crucial.

After all, Huckleberry Finn is a pretty good read.