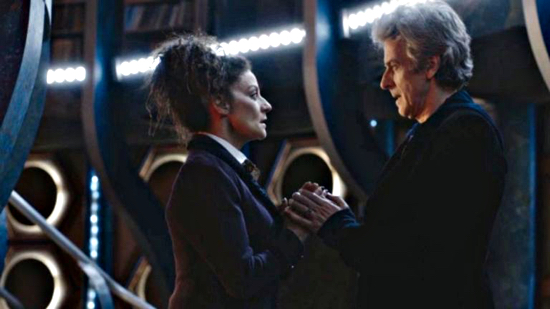 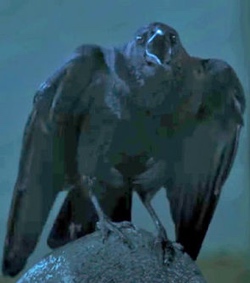 This season of Doctor Who just isn’t working for me.

This is imho, of course, and YMMV, but after a great opening episode (The Pilot) I’ve been very disappointed. The stories haven’t excited me, and, more important, the relationship between Pearl Mackie’s Bill Potts and Peter Capaldi’s Doctor doesn’t seem to have moved all that much forward; there isn’t any there there, as Trumpists like to say these days. (Of course I had to get a Trump reference in here. You know me.) It started off great, with hints of something even more brewing.

Why does the Doctor take an interest in the non-matriculated kitchen worker who was attending his lectures? Why did he go out of his way to use the TARDIS to go back in the past to take pictures of Bill’s dead mom – of whom she had no memory – and leave them for her as a present? Does it have something to do with the framed pictures of his granddaughter Susan and his wife River Song on his office desk? For that matter, why did the Doctor install himself as a professor (for the last 50 years?) at a specific Bristol university? Was he secretly keeping a grandfatherly eye on Susan, who had chosen to remain on Earth? Has he been waiting for Bill, knowing that she would be there? (“All of time and space, everything that ever happened or ever will…”)

There are only two more episodes left in Series 10 – three, if you count the Christmas special – and by this time in previous seasons, the Doctor’s relationship with his previous companions – Rose, Donna, Martha, Amy & Rory, Clara – had all reached a level of intimacy beyond their familiarity with the TARDIS and the sonic screwdriver. Bill, it seems to me, has developed a closer friendship with Nardole (Matt Lucas) than she has with the Doctor – in fact, everything she has learned about the Galifreyan has come from Nardole.

Each episode had also moved each companion’s story forward. So far, there hasn’t been much we’ve learned about Bill that we didn’t learn in her first appearance: she hasn’t had much formal education, though she’s smart as a whip and eager to learn more; she’s a science fiction geek; she’s gay and, like a lot of us, she hasn’t had much success with love. She wishes she knew more about her mom and her family; and – well, that’s about it.

As I said, there’s only three episodes left this season, and there just seems to me to be an awful lot to be discovered yet.

I don’t want to think that Moffat is coasting his way to the end of his association with Doctor Who; he hasn’t yet disappointed me. I loved the denouement of last season, so I’m still crossing my fingers – but…

Anyway, this is a rather short column today. But I do want to give a shout out to my niece Isabel, who has made her debut performance this week in the Newtown (Pennsylvania) Arts Company production of The Philadelphia Story as Dinah Lord.

You may be familiar with the 1940 movie which starred Katherine Hepburn, Cary Grant, and James Stewart, and was responsible for relaunching Hepburn’s career as a major Hollywood player – did you know that she was considered “box office poison” and couldn’t get a walk-on part at this point in her career? The play was specifically written for Hepburn by playwright Phillip Barry, whose wife, Helen Hope Montgomery Scott, was a Philadelphia socialite and a friend of Hepburn’s. Hepburn not only starred in the play, but also financially backed it, exchanging a salary for a percentage of profits. The Philadelphia Story was a smash hit on Broadway, and Hepburn enjoyed a great triumph as well as a flip of the bird to those who had tried to destroy her film career, especially when her friend Howard Hughes gave the film rights to her as a gift. Hepburn was able to convince Louis B. Mayer, head honcho of MGM, to give her veto rights over producer, director, screenwriter, and cast by selling Philadelphia to MGM for only $250,000, an amazingly cheap price. A pretty goddamn impressive move by Hepburn, and one that paid off in spades for her.

Here’s the plot, from Wikipedia, because I’m being lazy. Hey, I drove close to 200 miles today, so deal with it!

“Tracy Lord (Hepburn) is the elder daughter of a wealthy Philadelphia Main Line socialite family. She was married to C.K. Dexter Haven (Grant), a yacht designer and member of her social set, but divorced him two years ago, because he did not measure up to the exacting standards she sets for all her friends and family: he drank too much for her taste, and as she became critical of him, he drank more. Now she is about to marry nouveau riche “man of the people” George Kittredge.

“Spy magazine publisher Sidney Kidd is eager to cover the wedding, and assigns reporter Macaulay “Mike” Connor (Stewart) and photographer Liz Imbrie. He can get them into the affair with the assistance of Dexter Haven, who has been working for Spy in South America. Dexter will introduce them as friends of Tracy’s brother Junius (a U.S. diplomat in Argentina). Tracy is not fooled, but Dexter threatens her with an innuendo-laden article about her father Seth’s affair with a dancer. Tracy deeply resents her father’s infidelity, which has caused her parents to live separately. To protect her family’s reputation, she agrees to let Mike and Liz stay.

“Dexter is welcomed back with open arms by Tracy’s mother Margaret and teenage sister Dinah (this is the part Isabel played (much to her annoyance. When George sees Mike carrying an intoxicated Tracy into the house afterward, he thinks the worst. The next day, he tells her that he was shocked and feels entitled to an explanation before going ahead with the wedding. She takes exception to his lack of faith in her and breaks off the engagement. Then she realizes that all the guests have arrived and are waiting for the ceremony to begin. Mike volunteers to marry her (much to Liz’s distress), but she graciously declines. She also realizes, for the first time, that she isn’t perfect and shouldn’t constantly condemn others for their weaknesses. At this point, Dexter offers to marry her again, and she accepts.”

The Philadelphia Story was nominated for six Oscars, including Katherine Hepburn for Best Actress and James Stewart for Best Actor. Stewart won his only golden statue – hard to believe, isn’t it? And Hepburn went on to a total of 12 nominations – surpassed only by Meryl Streep – and won four Academy Award, the record for any performer. And Cary Grant? He was nominated so many times, but the only Oscar he was ever given was “Honorary,” in 1970, for “his unique mastery of the art of screen acting with the respect and affection of his colleagues.” Unbelievable, right?

As for Isabel? Here’s her “Who’s Who In The Cast”:

“Like Dinah Lord, she is an avid equestrienne, can play piano and sing at the same time, and will pursue Conservatory training in Musical Theatre. Iz has played Annie in “Annie,” Belle in “Disney’s Beauty and the Beast,” and Amelia Earhart. She has soloed on cello with Symphony in C Orchestra, and toured Asia with Maestro Eschenbach of the Philadelphia Orchestra. (C’est vrai! Absolument!)”

Acting is a precarious profession, as we all know, but I won’t be surprised at all if and when the day comes when Isabel Newell will be up on a stage, accepting her own award.

And thanks to you all for putting up with an indulgent, and very proud, Aunt Mindy.