Ed Catto: Black Panther, back in the day…

I’m thrilled for the Black Panther’s cinematic success. Don’t fool yourself into thinking it’s just another a Marvel superhero movie that happens to be about an African superhero. This phenomenon is a great adventure and so much more. It includes the success of a positive message and of a black director and of a mostly black cast. Black Panther explores tough topics including, but not limited to, nationalism, isolationism, the black experience in the US, and the black experience internationally.

This movie quickly went from an event to a celebration. It’s a celebration for the African American Community. The Sunday New York Times had an opinion piece on how it’s a celebration for the Black Nerd Community.  On NPR, I’ve heard Jamie Broadnax, the insightful genius behind the Black Girl Nerds podcast, speak about what it means to her.  I’ve also read her comments in the New York Times Magazine. The Black Panther movie really is a win for all comic nerds, proving that the stuff they like, when done right, can traverse media to entertain and inspire people a global scale.

The opening weekend box office tallies verified that Black Panther is a big deal.  There’s one more success in all this. It’s a more personal, and smaller, celebration in comparison.  But I’m still elated and inspired by this particular one. 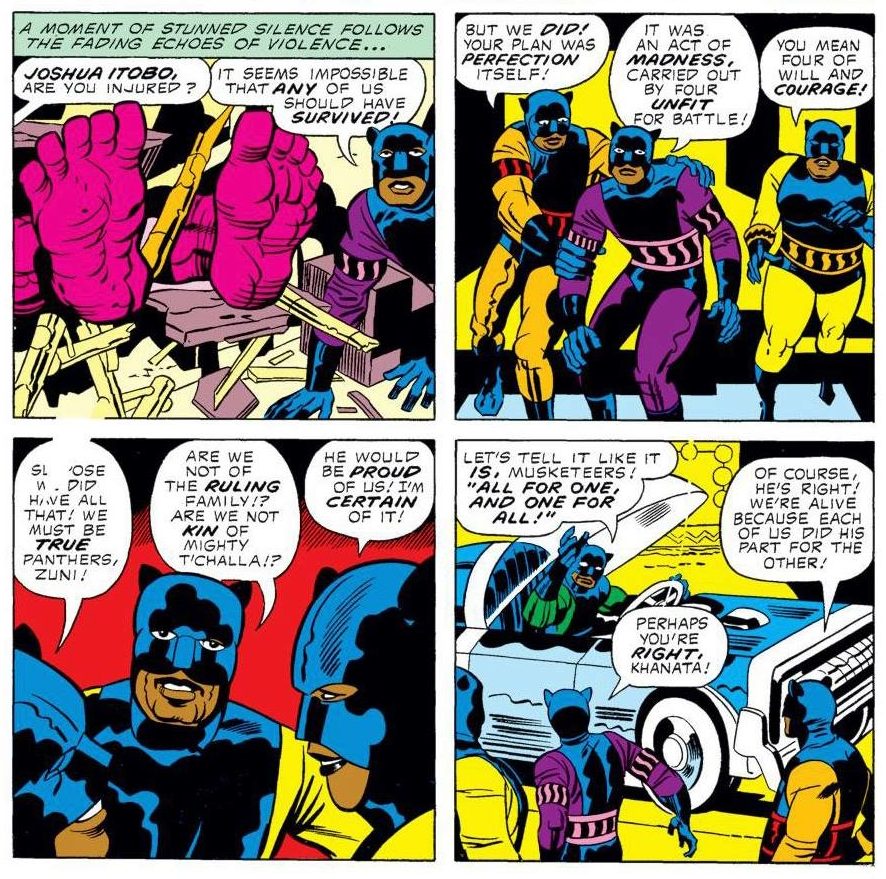 Right before going to the theater, I was remembering Jack Kirby’s second round of Black Panther adventures. The great artist Kirby co-created the Black Panther.  I’m a big fan of the man’s artwork, creativity and work ethic. But in 1977, when Kirby returned to Marvel Comics after a creatively explosive sojourn at the competition, one of the many projects he churned out was a new Black Panther comic series.

It was so disappointing to me. Oh, sure, the series was grand and boisterous, like any good adventure should be. But was just too silly and too goofy. I still cringe at the Black Musketeers, a thankfully forgotten concept. At that time, my little gang of comic book pals and I all thought is was absurd. A big part of the letdown was that we were comparing and contrasting this new Kirby comic to the previous Black Panther comic series. That one had blown our collective minds.

Let me set the stage. The Bronze Age version of Marvel’s Jungle Action debuted in 1972. Marvel used this comic to reprint old jungle comic stories like Tharn, The Magnificent, a second-rate jungle lord and two curvaceous jungle queens, Lorna and Jann.  These stories, from a simpler time, didn’t have much to do with the real Africa, or the real world, but they were as enjoyable as they were innocuous.  Through the lens of adulthood, their innocence is soured by the unintentional racism baked into many of the adventures. 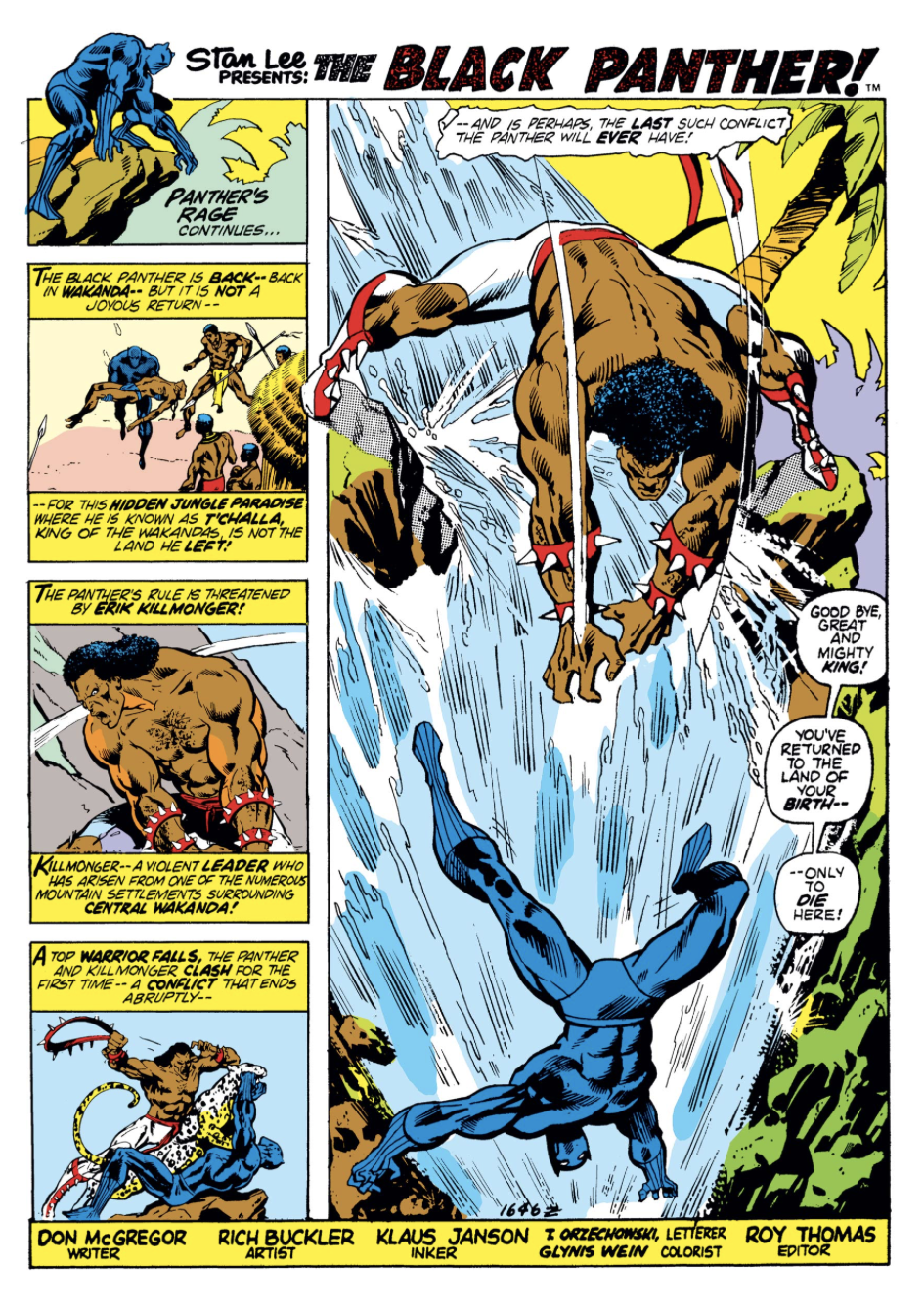 After a short time, the old Tarzan knock-off reprints were gone and Jungle Action showcased new adventures of the Black Panther!  I knew that character. I liked that guy. I was excited for this change.

It seemed to me that, T’Challa, the Black Panther,  tended to crop up in other Marvel heroes’ comics. I remembered how he helped Captain America thrash some bad guys in issue #100, and how he seemed to be Daredevil’s buddy in an issue of The Avengers. 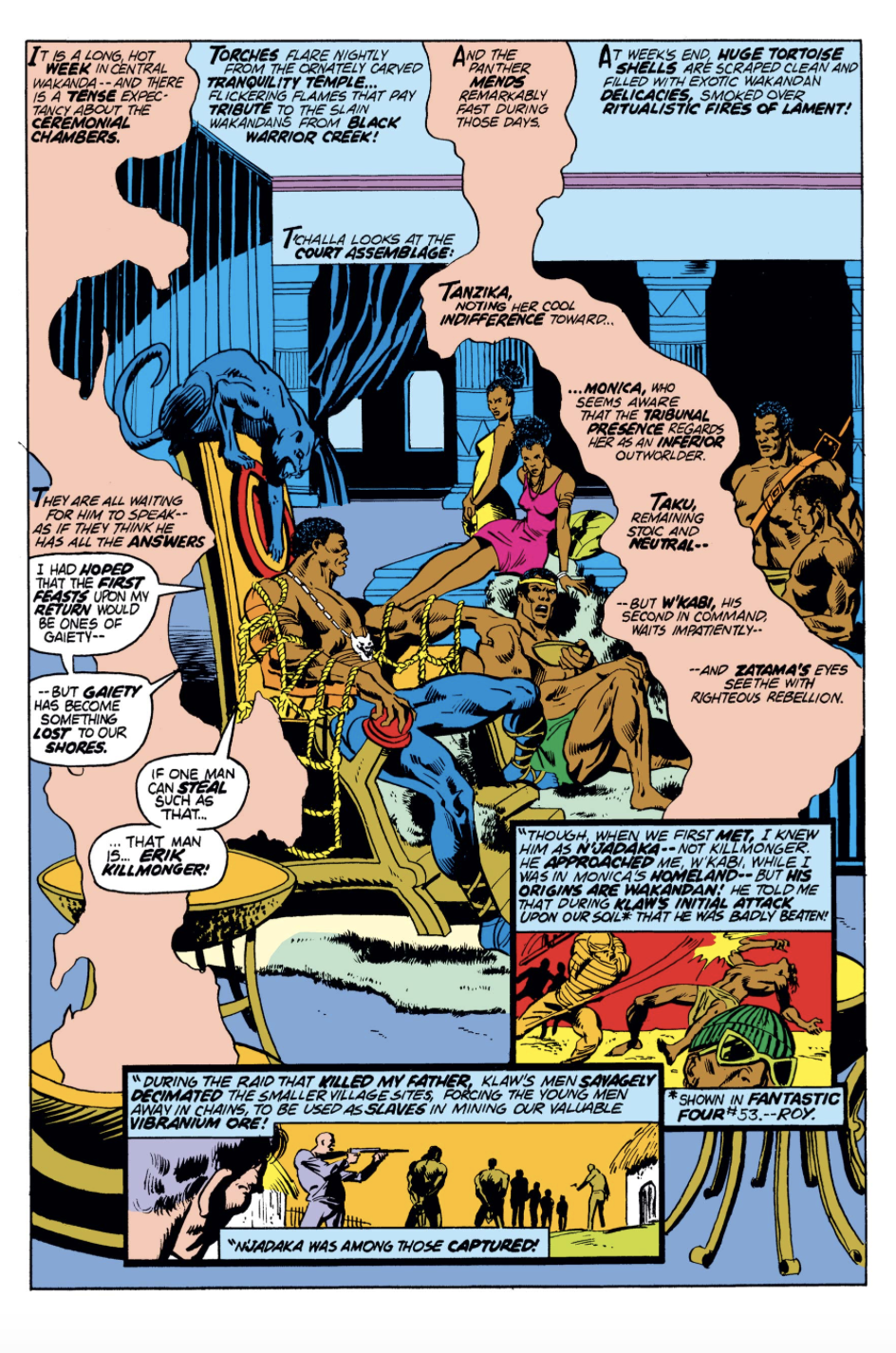 Jungle Action comics, now with Black Panther adventures, were something different.  They weren’t silly and they weren’t innocuous.  It was as if an unspoken covenant was forged between the writer and reader.  I could imagine the writer saying, “I’m going to take this very seriously, and work really, really hard on this story. If you come along for the ride, it’s gonna be a little more work, but I think it will be worth it.” 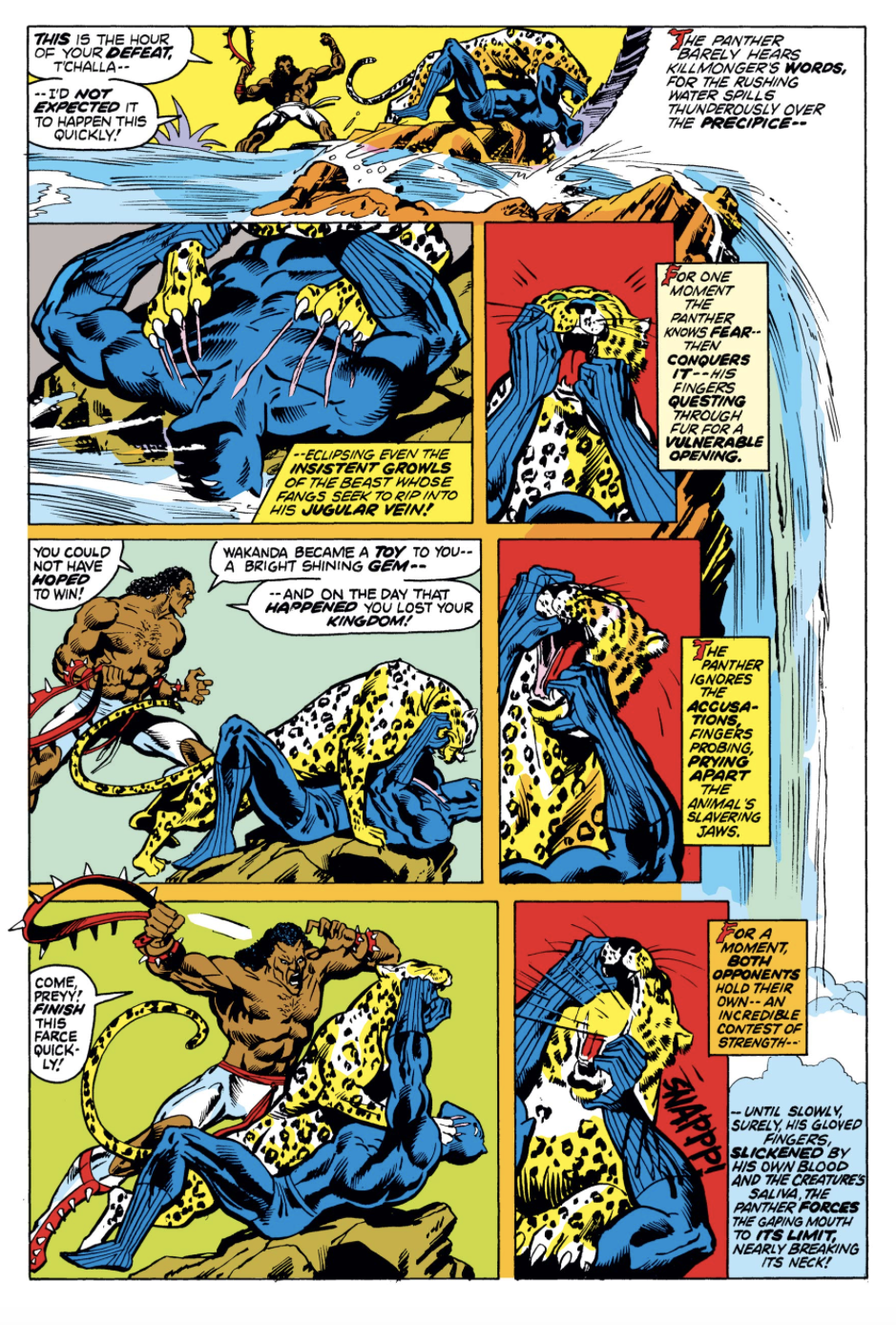 Every panel of these new Black Panther stories were overstuffed with glorious descriptions, insightful dialog and storytelling that bordered on poetry. There was a lot going on. There was a lot to remember. You had to pay attention to this one.  Each issue would take longer to read than other comics. I’d buy a stack of comics, but I  soon learned to save Jungle Action for last because I had to take my time with it.

Jungle Action’s abrupt change came about because the proofreader, Don McGregor, thought readers deserved better. Marvel promoted him to writer and he was off to the races. McGregor soon proved himself to be a superior writer who would go on to build a career with a long list of impressive accomplishments. Don is a romantic with passion for so many things in life. He’s a prince of a guy and one can find so much to admire about both his life and career.

Like so many comic characters, the Black Panther is a crazy quilt of various creators’ contributions over the years. The movie makers had the luxury of cherry picking the best parts and ignoring the rest. But it’s easy to see that so much of this movie is directly attributable to what Don McGregor, and his artistic collaborators, created. Make no mistake, the fingerprints of other talented creators are on screen. But for me, Black Panther seemed like a Don McGregor movie.

One of my favorite parts of this movies’ triumphant box office debut is the celebration of Don McGregor.  Life can be tough. But once in a while, a sweet guy who writes with passion gets his time in the spotlight so we can all pause to say, “Wow, thanks a lot.  You did a really good job.”  Here’s to Don McGregor.