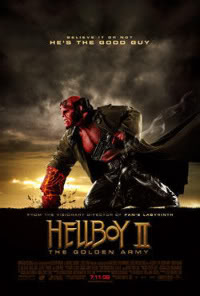 In previous editions of ComicMix Six, we’ve rounded up everything from Political Campaigns in Comics to Celebrity Team-Ups. This Friday marks the newest milestone for Mike Mignola’s Hellboy franchise, with the movie sequel Hellboy 2: The Golden Army hitting theaters, so this week’s list focuses on Mignola’s most popular creation.

The evil-fighting demon named "Hellboy" has been one of the most successful new superheroes introduced in the past 20 years, first appearing as a joke illustration from Mignola in the early 1990s and then evolving into his current incarnation to debut in a full-fledged Dark Horse comics series.

Picking through all those 15-plus years of content, here are the six very best Hellboy stories, from epics to little fairy tales, from Cavendish Hall to Hell on Earth, and everywhere in between (Note: Only Hellboy-specific stories are included in the list).

Read on for the ComicMix Six: Best Hellboy Stories.