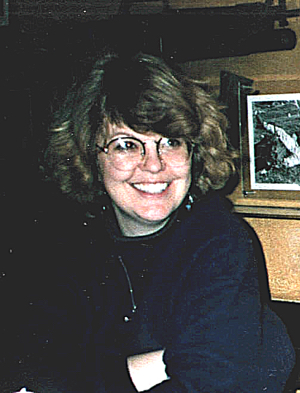 It was a lifetime ago. It was just moments gone by.

I’ve been working on a column discussing the passage for some days but haven’t been satisfied with it. Sometimes you try to say something and can’t find the right things to say. I’ve come across an old column I wrote ten years ago. Just about everything I wanted to say I said back then so, if y’all don’t mind, I’ll just reprint it here.

Today is Thanksgiving and a hearty Happy Thanksgiving to you all. As it turns out, it’s also the birthday of my late wife, Kimberly Ann Yale, who would have been 54 today. This is a day for stopping and giving thanks for the good things in your life and so I’ll ask your indulgence while I remember one of the best things in mine, which was Kim.

For those who don’t know her, never met her, how do I describe her to you? My god, where do I begin? Physically – heart shaped face, megawatt smile, big blue eyes. Champagne blonde hair which, in her later years, she decided should be red. That decision was pure Kimmie. She looked good, too, but she also looked good bald. More on that in a few moments.

She was buxom and damn proud of it. Referred to her breasts as “the girls” and was fond of showing them off. She was about 5’8” so that when she was in heels we were about the same height. Basically had an hourglass figure although sometimes there were a few more seconds packed into that hourglass than maybe there should have been. We both fought weight problems and I still do.

All that, however, is merely a physical description. Photographs could tell you as much and more and still tell you so little about Kim. Not who she was. Kim was an extrovert to the point of being an exhibitionist. She was sometimes flamboyant; I have described her as the world’s most innocent narcissist. She loved the spotlight but with the delight of a child. Yet, she also loved nothing better than to be in the corner of a tea shoppe or coffee house, drinking her cuppa, writing in her journal, totally absorbed into herself and the moment.

She also genuinely loved people. Loved being around them, hearing their stories, telling her own. She had one of the world’s great infectious laughs. If you were in a comedy on stage, you wanted Kim in your audience. She got the jokes, too, including some the rest of the audience missed.

She loved music, all kinds of music, and could talk knowledgeably about it for hours. Hell, Kim could hold forth on almost anything for hours. She loved classical, the blues, rock and roll, soundtracks to movies – everything. She loved movies, she loved books, she loved TV. She adored Doctor Who; we, in fact, met at a Doctor Who Convention.

She loved comics and she loved the idea of women in comics. At many different Cons, she would chair the Women in Comics panel and, in Chicago especially where she did it for several years, people learned to come because it would often be one of the most interesting, thought-provoking panels at the Con. She was part of the early organizational meetings that resulted in Friends of Lulu and their annual award for the best new female comics creator is named for Kim. She would have been very proud of that.

How do I describe our relationship – what we gave to each other? One example – she brought cats into my life, I brought dogs back into hers. She made me more of a cat person; I brought out the dog lover in her.

Other things she brought to me – her love of Westerns and of the Civil War. I had dismissed Westerns as “oaters” and “horse opera” but Kim patiently took me through the best ones, showed me the difference from a John Ford western and a Budd Boetticher one. Without Kim, there never would have been The Kents or my Marvel westerns, Blaze of Glory and Apache Skies.

On our honeymoon, Kim wanted to go to Fredericksburg, Virginia, so we could walk some of the Civil War battlefields in the area. I was a little dubious at first but went along because it was important to her. My god, I learned so much walking those battlefields. I don’t know if you can understand those battles or the War without doing that. We would later add others like Shiloh and Gettysburg to the list. Amazing, bonding, illuminating moments.

Kim and I worked together as co-writers on several projects, notably Suicide Squad, some Munden’s Bar stories, and a tale of Young John Gaunt that ran in the back of GrimJack during its final year at First Comics. I think Kim was a finer writer than I am. I’m at heart a storyteller and I’m mostly about what happens next; I turn a good phrase and I know plot, character, theme and so on but Kim was also into the composition and the polish on the story. She would go over and over things while I’d push on. I wish she had written more on her own; at the end of her life, so did she.

Kim also introduced me to the fabled “Bucket of Suds,” a wonderful bar in Chicago that was the nearest earthly equivalent I know to Munden’s Bar and to which we, in turn, introduced many folks from the comic book community, especially during the Chicago Comiccon. The owner, Joe Danno, was a mixologist and could invent a new drink on the spot in addition to creating his own cordials. The Bucket not only served drinks but, for many years, served home made pizza, burgers, breadsticks.

Joe also created his own catsup, mustard, bar-b-que sauce, and hot sauce. Want to see our esteemed editor, Mike Gold, both drool and cry at the same time? Get him talking about the hot sauce and the bar-b-que sauce, neither of which is available any more. (Oh, the humanity!) I set a scene in an issue of Hawkworld at the Bucket and got photo reference for our penciler, Graham Nolan, which he used wonderfully well. I later obtained the pages and gave them to Joe who proudly had them framed up over the bar.

Joe got older and the bar’s opening hours became more erratic. Kim by that point, was also sick with the breast cancer that would kill her. Joe finally announced that the Bar was closing and said there would be a party the closing night. Kim desperately wanted to be there – it was right around her birthday, as I recall – but she was too sick by that point to make the trip. The bar closed and Kim herself died the following March.

Kimberly wore her heart on her sleeve, both politically and personally, and it was an open and generous heart. She identified so much with underdogs. She was a PK – a Preacher’s Kid – and her father was an Episcopal chaplain in the Navy as well, so she was also a “Navy Brat.” She would move every few years to another base somewhere else in the country. Sometimes it would be a great place and sometimes it was one where she was treated horribly but one thing she learned was not to form really close friends because, in a few years, she or they would move on to another base and would be gone.

Yet despite all that, her heart was not bitter or closed. She loved meeting people and she did make friends even though her heart did get hurt time and again. What people thought of her mattered to her and sometimes that could hurt. I tried to explain to her that, in fact, while everyone had a right to their own opinion, not everyone’s opinion mattered. Some people were just assholes. Some were nasty assholes. Some had agendas. Some were misinformed. Kim understood all that or at least her head did but it hurt nevertheless. It’s hard when you lead with your heart.

Kim died of breast cancer more than ten years ago. I won’t go through all the particulars of that time, other than to note that it was mercifully swift and that she fought with her customary determination, élan and brio which she documented in a brave series of columns that she wrote for the Comic Buyers Guide.

There are a few grace notes to tell in the space we have. As a result of her bouts with chemo, Kim’s hair did fall out so eventually she shaved her head. She considered using a wig but eventually opted for temporary tattoos at her temples. I remember the butterflies.

In her final weeks, she let go of more and more things that simply no longer mattered. She let go of old angers, she forgave, she reconciled. As her body failed, ultimately her spirit became more clear. I’ll not say she went quietly into that good night; she was very clear about wanting to die in her own home and when circumstances forced us to bring her back to the hospital for pain management, she rebelled. Drugged up, she still tried to take the tubes out of her arms. She wanted to go home and, finally, we brought her home.

Yet, all of these are also simply random facts about Kim and cannot capture her. There is only one way that I know to do that – through story. We had three memorial services for Kim after she died – one at our church, one in New York for those who knew her from the comics industry, one back in Chicago for family and friends there. Stories were told at all three and, for me, they were the centerpieces of the memorials. Mary and I still tell them, recalling Kim’s foibles as well as her virtues for, as I have said before, I prefer Kim’s foibles to many other people’s virtues. They make her human. They make her alive.

I think that’s important for anyone who has lost someone who was loved. Don’t just remember – tell the stories. So that’s what I’d like to do with the comments sections this week, if you have time – tell stories about the lives of people we are thankful we have known, those who are no longer here. If you have a Kim story to tell, that would be great – I’d love to read it. If it’s about someone else, that’s okay, too – Kim would have loved to hear it.

That’s who Kim was – a person of story.

Kim was a geek back when it was not cool to be a geek and the triumph of geek culture would have floored her. The Star Wars prequels and now the new sequels and stand alone stories; the whole Lord of the Rings and Hobbit trilogies; the return of Doctor Who and the dawn of the superhero movie. She would have been in NYC with me for the premiere of the Suicide Squad movie; Kim would have seen the three-story tall Squad ad in Times Square, screamed and swooned and then laughed with utter delight. I can hear it in my mind’s ear.

So long as memory lives, so do the ones we loved.