Fasten your seatbelts. It’s going to be a bumpy night. • Bettie Davis, All About Eve, 1950

Well, maybe it’ll be a bumpy night. I mean, I’m just beginning this column. How do I know how it’ll turn out? Do I look like a prophet to you?

Okay, onward! One confession, coming up:

I am not going to continue to duck, dodge, elude, evade, ditch or even do an end run around something I should have dealt with months ago.

But… where to begin?

Before beginning, let me present to you, at no extra charge, what I imagine my delinquency concerning the matter that may be the subject of this column – it’s still early – would look like, if it existed, which it doesn’t.

...a shard of mirror, jagged and pointed and sharp, thrust into my soul stuff…

Please don’t ask me to describe “soul stuff” I’m not even sure souls exist, much less how they might appear to us. And would they appear the same way to, say, a gehinkle from the planet Blookish in the Maxima Centaur system?

A shout from the balcony. “What’s that?” I ask, cupping my ear (because I am, you know, a bit hard of hearing.) This balcony bound creature – a gehinkle? – says that I am procrastinating! Not coming to terms with the problem that lies buried in my soul.

(By the way…gehinkles really don’t have guts. Just thought you should know.)

Now, where were we? – bumpy nights… snarky aliens…improvised punctuation? Oh, wait! This thing that’s been eating my lunch these past few weeks! (Full disclosure: “eating my lunch,” as it’s used above, is a locution I swiped from that excellent novelist, James Lee Burke. {You did want to know that, didn’t you?}

Speaking of lunch – I should have some. A guy needs his nourishment! I’ll take a break and get back to you.

That wasn’t exactly haute cuisine, was it? Gourmets are well advised to give Chateau O’Neil a pass. But it keeps the stomach walls from bumping into each other and that’s all we ask.

Back to today’s topic. But before we get to the gist of it, I’m wondering if I should issue a Spoiler Alert here. What’s the protocol? Not that leaving a Spoiler Alert unissued would actually ruin anything, though I can’t be sure of that. Is it better to be safe than sorry? (Have you ever noticed that life can be difficult?) 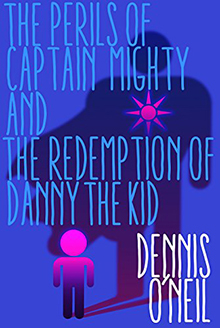 Another quandary. Is this an appropriate place to reveal the title? (And oh my gosh! Is telling you that what I’ll get around to discussing any paragraph now has a title ruining anything for you? Have I let a cat out of a bag? I mean, if you know something has a title you can figure out that it’s not, say, a battleship. Have we narrowed the possibilities too much?)

I’ve glanced at the bottom of the screen and can you believe it? Already 438 words? I’d better not waste any more of your time,

The Perils of Captain Mighty and the Salvation of Danny the Kid.

I guess I did decide to uncork the title.