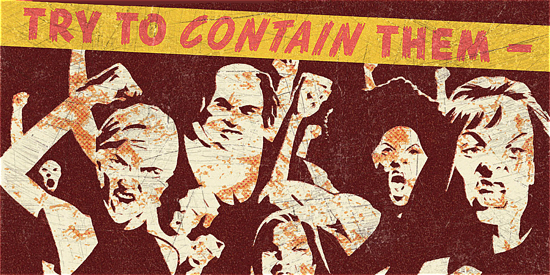 I’ve spent the past week or so in a bubble, apparently hiding from the news of the world. Which is why I was startled by the influx of posts yesterday announcing it was International Women’s Day. A day to recognize all the inspirational women in our lives.

It seems odd that I would miss such a day but it is a funny thing to have a single day dedicated to all women from the planet Earth. Women still make up half the planet, and there are similar days on the proverbial calendar. Still, the necessity of such a day is irksome. The year is filled with days where I can laud women from all walks of life.

Being torn on how to move forward with this column, I decided to err on the side of not nitpicking yesterday’s recognition and to try to enjoy the moment.

Truth be told, women have made strides in comics, both in the industry and in the stories. A few decades ago, I doubt Kamala Khan would have made it to the page. Even if she had, I doubt that she would have the same depth that she does now. The same could be said for one of her creators, Sana Amanat, who is an editor at Marvel Comics. But now we have a character that resonates across cultural and gender lines as a role model to the young and old.

The same exact excitement could be applied to Bitch Planet. Could we have had that book years ago? Of course. Would it have received the same praise it receives now? I doubt it.

However, this is still a small percentage of the comics pie.

Female characters still lead fewer books than male characters. Female creators still make up a small portion of the industry. Now, it is a point of conversation and an area of development. Companies are looking for ways to expand as they realize that courting the opposite sex is a growing market. It will continue to be as long as we look towards the future and remind them that we women are still here and will not be ignored.

On this site, we have amazing women who broke barriers in comics for my generation. For starters, Martha Thomases and Mindy Newell both worked in the industry, creating female-driven stories as they worked in a male-dominated industry. Emily Whitten has written for multiple sites about geekdom, something that isn’t easy as a woman. All of them have been an inspiration as well as a source of encouragement.

So, on this random day, I want to thank all the women who made it possible for me to be recognized as a voice to be heard. Everything you’ve done is helping move us to an equal future.