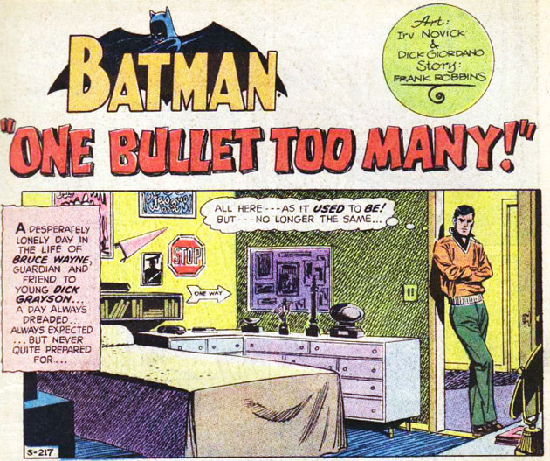 It’s back to school time and even though it comes around every year, it always surprises me at how quickly it sneaks up after a fun summer. This year, we’re sending our last child off to college, and that’s made me think of a classic Batman story. Face with an empty nest, I’m seeing a familiar story in a totally new light. 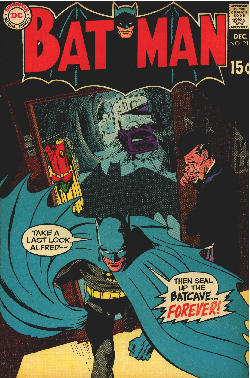 Today we’d call the October 1969 issue of Batman, #217, a reboot. It’s hard to conceive of it now, but in this story, they stripped the character down to his very basic elements. No more Wayne Manor, no more Robin, no more Batcave and no more outlandish villains. Of course, they all came back eventually.

The time was right for a change. The Batmania of the sixties, fueled by the TV show’s camp craze, was over and done with. By 1969, the TV show was like an embarrassing memory from a party where you had too much to drink. Oh sure, it was fun at the time, but then you need to sober up and leave that tomfoolery behind you. And back then, no one ever dreamed that one day in the future Batman would be bigger than ever and there’d be a whole new wave of Batman ’66 merchandise. And to even say that you could actually own every episode, and watch them whenever you wanted, seemed crazy. 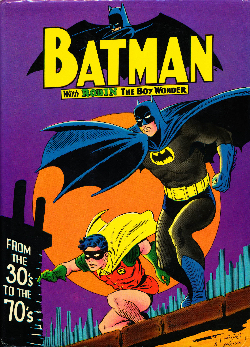 Back in 1969, comics in general, and Batman in particular, were taking big steps to position themselves as more than juvenile kiddie fare. Denny O’Neil and Neal Adams led the brigade of creatives who took a more serious, more grown-up approach to Batman. He’d no longer be a silly buffoon in tongue-and-cheek adventures.

“One Bullet too Many” by Frank Robbins, Irv Novick and Dick Giordano, was first published in ’69, and later reprinted in the classic collection: Batman from the 30s to the 70s. This tale was a part of a long re-energizing of the Batman mythology.

In this story, Dick Grayson (a.k.a. Robin the Boy Wonder) is preparing to leave for his freshman year at Hudson University. Dick gently teases the saddened Bruce (Batman) Wayne and their butler, Alfred about his imminent departure for college. He then brings his two (!) suitcases to the front door. I guess Alfred didn’t need Bed, Bath and Beyond’s College Registry/Pack and Hold in those days.

Astoundingly, Bruce and Alfred don’t arrange to drop young Dick Grayson off at school. Instead, Dick casually hops in a taxi as the adults glumly watch from the front doorway. Can you imagine a parent hailing a cab to take their child to the first day of college today?

Long before I started my freshman year of college, I read this Batman story and thought of how I’d be like Dick Grayson one day: bra
vely leaving for college with equal parts of excitement/hope and homesickness/apprehension.

(Of course, Animal House and my father’s fraternity stories painted an entirely different picture of college, but that’s another story.)

So while I identified with college freshman Dick Grayson so long ago, now I find myself looking at this story in an entirely different way. As we venture to drop our daughter off at a college majestically overlooking the Hudson River, it sure seems like the fictional “Hudson U” to me. So I now find myself identifying with the crestfallen sadness of Batman and Alfred. And I now see this tale as the quintessential empty nest story.

As soon as young Dick’s taxi drives off, Bruce tells Alfred to pack it up, and that they’re getting outta town. “Take a long, possibly last look, Alfred,” says the Caped Crusader. “We’re moving out of this suburban sanctuary.” I guess there wasn’t a need to stay in the Gotham school system with Dick in college. He’s decided they’re moving to the city and he’s going to start a new business. The venture was called V.I.P. (Victims Incorporated Program), but it was essentially a “second act” start-up, by today’s standards.

Kudos to Bruce Wayne for his courage. Good for him, and Alfred, for closing down dusty old Wayne Manor and the Batcave to bravely start the next chapter of their lives. I’m overly sentimental, and, I’ll admit I am having trouble making the transition that decisively. Packing up our Wayne Manor and starting a new business isn’t quite as easy for me, but I get the idea. It’s good advice. Leave it to Batman to show me the way. Again.

“I can’t bear to look back, Master Bruce! “ whined Alfred.

Bruce Wayne resolutely respondsed, “Don’t, Alfred, the future is ahead!”