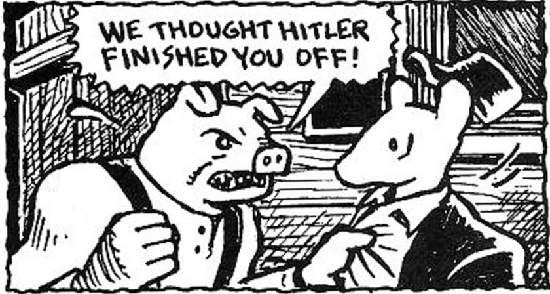 Last week I went with my friend to a screening of Germany’s entry for the foreign-language film Oscar, Labyrinth of Lies, hosted by the United States Holocaust Memorial Museum and featuring a Q & A with director and co-writer Giulio Ricciarelli. The film and Q & A were excellent.

Labyrinth of Lies examines Germany during the run-up to and beginning of the Frankfurt Auschwitz trials, as seen through the eyes of young public prosecutor Johann Radmann (Alexander Fehling), who strives to bring the truth of what happened at the camps into the light, and secure justice against the perpetrators via the court system. It tracks his attempts to obtain support for his crusade against the backdrop of strong political and social opposition in West Germany, and in the face of ridicule and hostility from his fellow prosecutors. The film does an excellent job of evoking the atmosphere and culture of a post-war Germany with a flourishing economy and no desire to look back at harsh and horrific truths.

Radmann’s world, from his struggle to get any of his superiors to support his legal quest and any of the Holocaust survivors to trust and speak with him, through to his difficulties in facing the brutality of the Holocaust, its effects on him and his relationships personally, and the disillusionment with humanity that he must work through as a result, is a well-told and emotionally gripping story. It is also one we are drawn into as we share in his amazement and outrage at watching a Germany that is seemingly wrapped in collective amnesia regarding what its citizens chose to do less than twenty years before, and at former SS members who have, with apparently no difficulty, slipped back into civilian life exactly as they left off. (As one associate explains, “The public sector is full of Nazis. And none of them has anything to worry about.”)

The story of Simon Kirsch, a survivor of Auschwitz who at first refuses to discuss his experience at all, is also riveting and powerfully portrayed. Kirsch’s tale and his revelation of it is a pivotal point in the movie; for after Radmann and journalist Thomas Gnielka find evidence in Kirsch’s apartment that they can use to build a case against the eventual defendants, they are able to convince Kirsch as well as many other Holocaust survivors to give testimony about their experiences. However, they have great difficulty in getting to that point, since Kirsch is gripped in a maelstrom of emotions in the aftermath of his time in the camps, including tremendous anger, sadness, and guilt at surviving so many who lost their lives. Forcing him to face the awful memories he lives with seems cruel, yet Radmann and Gnielka rightly observe that these secrets must be brought into the light before anyone can begin to heal. Opening the floodgates, however, also results in Radmann and others being forced to face horrors worse than any of them realized as the parade of survivors tell their wrenching tales of the camps.

Having read a fair amount about the Holocaust over the years, I was familiar with the Frankfurt Auschwitz trials. However, what I was completely unfamiliar with, and what Ricciarelli, his co-writer Elisabeth Bartel, and the cast of Labyrinth of Lies portray so well was the culture of Germany in the late fifties and early sixties when the trials took place. While these days familiarity with at the very least the Nuremberg trials of 1945-46 leads one to think that after the war, everyone was made aware of the horrific crimes against humanity perpetrated against the Jews and others sent to the concentration camps, the film shows that in fact, at the time of the Frankfurt trials, older Germans refused to speak of the atrocities of the war, practicing silence to willful ignorance when the subject arose; and younger Germans, raised in this atmosphere of grim and institutionalized silence, were either ignorant or unsure of the full truth of what had occurred.

The film is a fascinating examination of the principle that what we choose to remember shapes the world, and highlights that the German culture of denial at that time was poisonous to attempts to move forward, and also allowed criminals such as Josef Mengele to cavalierly elude capture, sometimes for decades.

Labyrith of Lies is an exceedingly well-researched and intelligent film; and one that manages to weave the elements of a courtroom drama, fresh revelations about a much-studied period in history, the emotional and personal journey of an admirable protagonist, and the inherent complexities and contradictions of humanity that are so ruthlessly highlighted by the events of the Holocaust into a cohesive and arresting story. In showing Radmann’s struggle to confront the absolute incomprehensible atrocity of the Holocaust, and his determination that in the face of so much wrong the only remedy is to do what’s right, the film conveys a vital message, and manages to do so in a way that is fascinating and uncontrived.

Interestingly, the film also reminds me of the well-known graphic novel Maus (which ComicMix has featured before), another well-executed true story of the Holocaust, written and drawn by Art Spiegelman. The film’s Radmann and Kirsch in many ways mirror Maus’s Art and Vladek Spiegelman, with the younger protagonists struggling to comprehend and live with the true stories they are encountering, of a humanity so contradictory and an atrocity so monumental as to be unfathomable.

The struggle Art Spiegelman goes through is particularly evident at the beginning of Maus II, as he tries to determine how to approach Auschwitz in graphic novel form, and belittles himself for thinking he could distill the impact of his father’s stories into something that would fit in a mere novel. This struggle with the enormity of such a task is echoed in Labyrinth of Lies, when Radmann moves from trying to locate just a few former Auschwitz staff members to ordering every phone book in Germany because he has realized that these criminals could literally be anywhere, and is shown almost comically in the delivery of an entire truck of the books, which evoke the literal feeling of being overwhelmed with information and not knowing where to start or how to approach the problem.

Another shared thread is the struggle of the survivors to face their experiences, as shown in Simon Kirsch’s possession of a suitcase full of papers he grabbed on the way out of Auschwitz, which he has never examined. Similarly, Vladek Spiegelman, although he does retain a box of photographs of family members, is shown to have destroyed all of his deceased wife’s journals recounting her Auschwitz experience, seemingly without having read them.

Both Labyrinth of Lies and Maus are amazingly well-executed and moving tales, in turns engaging and horrifying, of the Holocaust and those attempting to deal with its aftermath. I highly recommend Labyrinth of Lies, and, if you haven’t yet read Maus, it as well.

And until next time, I hope you Servo Lectio.