NEW FANTASY PULP FROM PRO SE AND HANSEN’S WAY- THE HUNTRESS OF GREENWOOD!

Pro Se Productions, one of the leading publishers in the New Pulp Movement, announces today the release of its latest volume, the newest release from the author centered imprint Hansen’s Way.  From the fantastic mind of one of Pro Se’s best selling authors, Nancy A. Hansen, comes a collection filled with Magick and Heroism, Monsters and Adventure- THE HUNTRESS OF GREENWOOD! 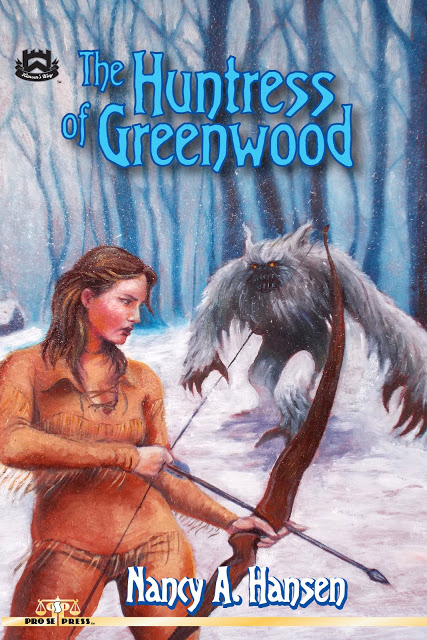 When the northern frontier of a world in upheaval most needed a champion, a champion arrived– a short statured, buxom woman with piercing green eyes, a sizable streak of stubbornness, and a determined spirt that refused to accept defeat. Roshanna the Huntress is the warder of enchanted Greenwood, both a wanted outlaw and staunch defender of all good beings. With bloodlines of Elf, Dwarf, and Human coursing in her veins, she tirelessly treks the forest and countryside, bow over her shoulder and knife at her hip, struggling to maintain an uneasy peace while fighting to keep the creations of a Dark God at bay.
Acclaimed Author Nancy Hansen and her own Pro Se imprint, Hansen’s Way, presents THE HUNTRESS OF GREENWOOD, a collection of thrilling tales of fantasy and adventure where a world of magick exists a mere heartbeat away! From Pro Se Productions– Puttin’ The Monthly Back into Pulp!
Now Available from Amazon at http://tinyurl.com/d6jw8el and at www.prosepulp.com! Coming soon in Digital Format! Featuring stunning cover artwork from David Russell and format and design from Sean E. Ali!
Looking for Action and Magick?  Ready for Creatures and Chaos and a bow slinging Heroine to save the day?  Then Nancy A. Hansen’s HUNTRESS FROM GREENWOOD is what you’re looking for.  From Hansen’s Way, an imprint of Pro Se Productions- Puttin’ The Monthly Back into Pulp! 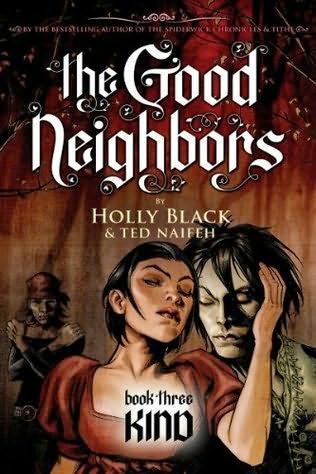 The final chapter in The Good Neighbors trilogy brings to a close the story of Rue Silver, a somewhat typical young adult fantasy heroine. She discovers that she is actually a human/faerie hybrid destined to be heir to the faerie throne. Of course, the faerie in general don’t like the humans and there’s a movement at foot that endangers Rue’s friends and neighbors. She’s trapped between opposing forces that have been moving ever closer to a final conflict.

In book one, [[[Kin]]], we met Rue and her friends and author Holly Black displayed a wonderful way of handling teenagers with disparate personalities. Slowly the real story unfolds and we’re intrigued by all that we learn.

[[[Kith,]]] the second volume, was a terrific middle chapter as things are explained but the real danger is presented and our heroine has tough choices to make and little time to make them. Both books, by the way, earned Eisner nominations so clearly they have been well received.

Now, the final volume brings them all together and does so a little too breathlessly for my taste. First of all, being released a year apart, the second and third parts would have benefitted from recaps, a fault throughout most of the Graphix series.

Black has her hands full as the different relationships need to be settled and the climax approached in a taut way so we’re anxiously awaiting to see what happens to human and faerie alike. Unlike the previous installments, this feels incomplete. She may have well set herself with too many threads to tidy and not enough space to wrap things up in a satisfactory manner. There are swift scene changes that leave you wanting more form the previous scene and by the end of the book you’re thinking there should have been more. It ends and then we’re done without much of an anti-climax for the characters.

Ted Naifeh’s effective black and white artwork is as strong here as in the previous volumes, but there are times his storytelling should have been clearer to help the rushed story. There’s actually a lack of visual emotional impact in this chapter, where characters bid one another farewell and the stakes are high.

It does wrap things up and overall, the trilogy makes for a nice read. There’s little new here, beyond Rue herself as a character, but Black and Naifeh provide an entertaining addition to the growing YA fantasy GN category. Still, I was left wanting something deeper or more powerful – or something that lingered longer once I closed the cover.

That’s how creator James Watson describes his damsel in distress heroine, Paula Peril, who is already making her way from the indy comic series to live action films, as you can see here

We cover the origins of Ms Peril, plus:

Enjoy the Paula Peril trailer, then Press the Button for more!

Salu Digby was born in the 30th century—though she was born on Earth, her parents are actually from the planet Imsk.

Like all her people, Salu had the power to shrink herself to microscopic size. As a teenager she heard about the Legion of Super-Heroes and decided to seek them out. She applied for membership and was initially rejected but applied again and was accepted, adopting the name Shrinking Violet.

The name is only partially due to her powers—Salu was one of the quieter, shyer members of the Legion. She is a stalwart heroine, however, and has been one of the Legion’s most steadfast members.

Over the years, she grew in confidence, particularly after begin kidnapped and held captive by Imskian freedom fighters. After that incident, Salu became considerably more aggressive and more outgoing. She also became one of the Legion’s most skilled hand-to-hand combatants.

In today’s brand-new episode of Simone & Ajax: The Case of the Maltese Duck, by Andrew Pepoy (with colors by Jason Millet),  our heroine, Simone, and her dinosaur pal, Ajax, find themselves locked in a cell. Their captor is the beautiful Fu Wahu.

The evil temptress is trying to rejuvenate her father, the dreaded Fu Ohn Yu. Can our heroes save the duck?

More: The Adventures of Simone & Ajax: The Case of the Maltese Duck

On This Day: Catwoman

The daughter of Brian and Maria Kyle, young Selina had an unpleasant childhood. Her mother loved cats more than her own children and eventually committed suicide, while Selina’s father was an angry layabout who drank himself to death a short while later.

Selina wound up on the streets of Gotham City, in an orphanage, and then in juvenile hall in rapid succession. At 13, she discovered that the hall administrator was embezzling funds, and almost died when she threatened to expose the woman. Escaping the trap, however, Selina stole enough evidence to incriminate the woman and enough money to keep herself going for a while, and then disappeared.

It was while she was at this job that she first saw Batman and, inspired by him, created her own costume to become the renowed masked, cat burglar, Catwoman.

Since then, Selina has vacillated between villainess and heroine, and has had an off-again, on-again relationship with Batman himself.

In today’s brand-new and now brightly colored episode of The Adventures of Simone & Ajax, our heroes must find a way to protect the villagers who think Simone is their hero, Jungle Jayn.

With a skin-tight tunic and the best of intentions, our heroine must face a plethora of invaders!

Joanne Woodward Gets a STAH

Okay, so she never played a heroine or a supervillain, but still, couldn’t you at least imagine that Joanne Woodward could have?

Today in 1960, Woodward received the very first star on the Hollywood walk of fame, toting an Oscar for her performance in The Three Faces of Eve. She currently resides in Westport, Connecticut with this other actor no one’s ever heard of named Paul–what is it? Newman? Neuman? I forget.

Two Girls And A Lot Of Magic….

When you stop to think about it, there are a lot of similarities in the stories of Dorothy and Alice and now the connection is much deeper than we ever imagined. The critically acclaimed indy series Oz – Wonderland Chronicles might have passed you by, take a minute for ComicMix Radio as we preview the title with one of the creators. Plus:

• Got an idea for a super heroine? Shadowline is listening!

Press The Button now, and pass the eggnog!