Marc Alan Fishman: When Page Does Not Translate To Screen 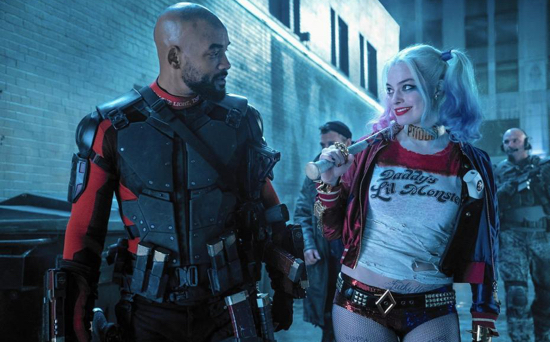 The battle lines are drawn each time a leaked picture hits the web. The tattooed Joker. The dark-costumed Superman. The old-school-but-with-new-web-shooters Spider-Man. The Flash — the TV one or the movie one? Aquaman, a.k.a. the WWE’s Roman Reigns. Starlord by way of Han Solo. And whatever the hell Lex Luthor was doing with wardrobe from the porn parody of The Social Network. It sets the nerds on fire in heated debates and discussions. At their core, no true fan of a character can draw peaceful breath while their favorite character is reinterpreted by Hollywood costumers and art directors who totally do not even know what comics are!

And then the stories themselves! What good is Batman v. Superman when it seems like the writer’s room and director are hell-bent on cramming eight major stories into a single bloated cry-fest? Or what of Marvel basically rewriting the same script over and over, but changing the lead character to whatever name is on the title page, to fill in a roster spot for the next massive crossover planned in 2021?

And of course, the studios get their fair share of the blame. How many more retreads of the Fantastic Four will we have to sludge through until the owners of the license finally figure out they can’t make work? Who will tell DC that it’s not a great idea to take the notes on your universally not-loved picture and just apply them willy-nilly to the next movie in line? And I haven’t even scratched the surface on some of the indie debacles we’ve seen that utterly miss the point of their source material.

For every amazing adaptation like Sin City, Hellboy, Deadpool, and Iron Man, we are made to suffer through the muck of Ghost Rider, Catwoman, and Green Lantern. And in all of those cases, it’s seemingly impossible for the nerd masses to unite in love. And even sometimes when the creators totally get it right — Scott Pilgrim, American Splendor, or Ghost World — it doesn’t always spell mind-blowing blockbuster. Which in turn causes the studios to intervene and hire writers and directors to apply their “Hollywood Magic,” and thus we get Batsad v. SuperSerious: Dawn of RainFights or the recently released Batman: The Killing Joke of Barbara Gordon Having Sex With Batman, WTF!

So, how do we deal? Well, I’d say you take a page right out of John Ostrander’s book. No, please don’t tear up the man’s comics! John’s review of Suicide Squad was the best review of the film a fan could ask for. Why? Because John proved that one can love the source material separated from the film is winds up inspiring. What a novel idea! Taken without the source material in mind, Suicide Squad is a loud-brash-loud-angry-loud-bright-loud action flick. A decent one, in fact. Is it Hamlet? No. But it’s a good popcorn flick where things go boom, and the one-liners make you giggle. Are there better comic book adaptations? Yup. Plenty. But taken for what it is — an action movie that will tie-in to future action movies — it was a nifty romp.

This, of course, leads to my unanswered question of the week. How can we, the nerdiest of the nerds, separate ourselves from the horded minutiae of the pulpy roots we commit to memory that now morph into multiple new media? I am truly of two minds on the subject. I think immediately of an adolescent girl who sees Suicide Squad without any knowledge of the source material. I think how she walks away loving Harley Quinn. And I bristle at the thought. “How could you like that vapid one-liner spouting Hot Topic walking advertisement!” I chortle in my mind. But then, the counterpoint seeps in creepily behind the bluster. “If she truly loves the character, she might seek out more information, with which she might partake of Mad Love, or several other better interpretations of the character and come to love Harley more wholly!” And that my friends may end up being the grey answer out of our world of black and white.

We simply can’t blame Hollywood for attempting (and failing) to stick closely to the roots of any license they gobble up. They are in it to make money. That means casting Will Smith and writing Deadshot less like John Ostrander did and more in line with what puts butts in seats instead of eyes at the local comic shoppe. At the end of the day, the character is able to live in infinite iterations. The cream will always rise to the top. Lest we forget: Harley Quinn was made for a cartoon long before she was comic cannon. Starlord as a wise-cracking anthropologist with a love for scoundrels just looks and feels cooler than an uptight space-Nazi.

In a world where every comic has potential to become a great TV show or movie, we are actually allowed to have our cake and eat it too… so long as what makes it to screen is treated with depth, clarity, and care.

Part of what makes Guillermo Del Toro the accomplished horror director that he is comes from his belief in just what parts of the supernatural are fact and not fiction. In our exclusive interview, he tells us what parts of that helped him construct the scares on his newest film, CRIMSON PEAK.

The whole time I’ve been on the creator side of Artist Alley here in the midwest, the name Dirk Manning has been omnipresent. The ebony-coifed, Cthulu-befriending, ne’er-do-well of independent horror comic writing fame has long been a stalwart presence on the periphery of my own indie tunnel-vision. Finally, I decided to be more than a passing conversation and Facebook poker and converted myself into a paying customer. And with his first volume of Tales of Mr. Rhee sitting proudly over the potty where I watch my toddlin’ son enjoy bathtime, I’ve consumed the initial batch of madness. I am elated to post that I didn’t carve a single mystic rune into my skull whilst enjoying it.

The book itself is a hoot. A collection of web-comics presented in the standard printed comic format, the series straddles the line of the occult somewhere between the blue collar and the black robe. “Mr. Rhee” himself is a tough-as-nails savior of the damned in the same vein as folks like Constantine or Hellboy. He’s got spells and a bad attitude to keep him safe from demented and deranged demons. In all, the first volume covers bits and pieces of the titular thaumaturgy, from his humble and tragic origin to his current dangers regarding the dastardly demons that lurk in Mr. Rhee’s barely-kept-closed-closet. Say that three times fast.

Upon completing the trade, I was left in a bit of a stupor. The forward, by fellow midwestern writer “Uncle” Raf Nieves – which I oddly chose to read last – dealt entirely with the damn, I wish I’d thought of that feeling a creator might get reading somebody else’s work. While I had none of those feelings, I get entirely what was being communicated. It’s actually what drew me into making comic books in the first place. Mr. Rhee and the universe he occupies shares so much space with so many other occult/horror universes that it left me pondering mostly how talents like Mr. Manning, Nieves, and the rest all end up traveling down the same dichotomous road.

As mentioned above, Tales of Mr. Rhee lives on the line between the blue collar workaday world and the epically macabre. The evil and horrific worlds created in horror comics (and TV shows, movies, what-have-you) rely heavily on balancing the mundane with the insane. A Friday the 13th movie without the overnight camp set-up is simply never worth your time. And even when a story shuffles harder towards the blue collar – like Hellboy or Goon – there’s always a strong undercurrent of truly wicked things that anchor the story down. The balance is the key to the quality.

And for those seeking to dispel my thesis with Ghostbusters… go watch the boogyman episodes of The Real Ghostbusters and get slimed. But I digress.

The best scares – like the best laughs, or even action beats – come when you least expect it, and hit at issues underneath the surface. The best terror one might ever feel (aside from the kind you get when you sign your first mortgage) contains a large portion of plausibility, with the right dash of the impossible. A spider catching you off guard might make you jump. A spider that whispers to you that you’ve always been a failure is terrifying.

Tales of Mr. Rhee begins as an unassuming monster hunter rag. So true that it ultimately excels when the supernatural takes form as annoying neighbors, transitory spirits hanging at the bar, and even within the crevices of land purposely sold to a unassuming family to spare those in-the-know from the potential danger. The tales themselves are presented all without backstory, and finish as quickly as they start. As chapters tick off, the creeping crescendo of the final reveal ultimately provides the biggest scare of them all: We thought these tales were merely random short idiosyncratic occurrences, devoid of greater machinations. All-the-while, amidst his own decaying network of former associates, Mr. Rhee, unyielding bad-ass we thought him to be, is caught with nary an alacazam to mutter in the face of the evil that lurked underneath him the entire volume. Plausible, with that pinch of the impossible you say?