Mindy Newell: On Being Fucked Up 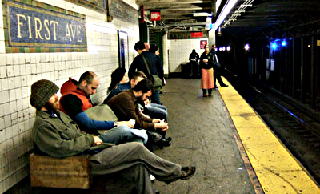 The President: What’s his plan? Ohila: I think he is finishing his soup. • Hell Bent, Doctor Who Season Finale, Series 9

“Sometimes I think about what my mom told me. How I was really, really sick when I was first born and the doctors thought I was going to die. But there was this one doctor who wouldn’t give up. And sometimes, when things are really bad and fucked up, and I’m just so fucking tired of hauling myself out of the abyss one more goddamn time, I wish he had.” • Mindy Newell, On Her Depression

Thanks for the letter and the story, which I liked enormously. I’m glad you liked my little book and that it may have helped in some way.  I’m sure you’ll avoid your Jack the Ripper and pull through with grand success; remember that most people do. I did. So will you.

Postcard I received from William Styron after I sent him a copy of “Chalk Drawing” along with a personal note after reading his “Darkness Visible.” I treasure it.

I recently had the fun experience at my day job of assisting with ECT – electro-convulsive therapy. While the procedure has come a long, long way from the days of One Flew Over The Cuckoo Nest, it ain’t – to put it mildly – pleasant.

Oh, the patient is put under general anesthesia with a hit of succinylcholine to control tonic-clonic activity, so it’s not exactly Torquemada’s House of Medieval Torture, but there’s still something ugly and uncomfortably sadistic about purposely sending an electrical charge through a brain, isn’t there? Even if it has proven to be a successful intercession against intractable depression. And something profoundly impersonal that disturbs me, too, in the way a human being is treated like a slab of meat on the grill. “How would you like that, sir?” asked the waiter. “Well done,” said the diner, to twist W. C. Fields.

Or is that I feel it more deeply because of my own acquaintance with the Darkness Visible, as Pulitzer Prize-winning author William Styron titled his memoir of his own battle with the disease.

At any rate, as I stood looking down at the patient as the doctor was about to go to Defcon 5, I couldn’t help thinking…

There but for the grace of God go I.

At the time I co-wrote “Chalk Drawings” (Wonder Woman #46, September 1990) with George Pérez, I hadn’t told anyone about the depression since I hadn’t been officially diagnosed with it; in fact, I didn’t even know that I had it, only that something was “off” and “wrong” and had been for a long time…a very long time, actually. IIRC, the only one I had ever even mentioned my anxiety episodes to – which are frequently symptomatic of the condition, though they can stand “alone” – was my editor Karen Berger, and even that discussion was on a friend-to-friend basis one night over dinner in a restaurant on Columbus Avenue (I think) in Manhattan, and only because I was in the midst of having a giant panic attack over my plate. So the story of teenage depression and suicide was a bit – well, the word serendipitous comes to mind, but I usually use that word connoting something good happening, as in good karma.

So I can’t say that the depression made the story easy to write – I only know that it came pouring out of me like milk from a carton. At the time I guess I thought it was because of my empathetic ability – not in the way of Betazoid Deanna Troi on Star Trek: The Next Generation, of course – to get inside the head of my characters. At least, that was what everybody (editors, fellow writers, and so forth) was telling me.

It’s well known that many creative people have suffered from depression, and you can Google “creativity and depression,” or “writers/artists and depression” and get a zillion hits. While the psychiatric community is still out on the actual conclusive evidence, i.e., the biological/genetic/chemical linkage, there is a lot of subjective support out there. And while by no means am I putting myself in the category of writers like David Foster Wallace or Virginia Woolf or F. Scott Fitzgerald or William Styron, I do somehow just know that my illness, while certainly fucking up my life in so many god-awful, totally horrible ways, has also led me to that oft-touted “empathetic ability” to get inside my character’s heads

But can I get into my head?

I have a dream, a dream to write a “personal memoir” in the form of a graphic novel (of course, I can’t draw worth a damn so I’ll have to find an artist) about my experiences with the “darkness visible” of depression.  It won’t be a “my mommy and daddy fucked me up” account, as in Prozac Nation or in Girl, Interrupted, although, dearest family, you’ll be in there; you’ll have to be. I think, rather, that it will be more along the lines of Carrie Fisher’s Postcards From The Edge, vignettes or short-short stories.

That’s a great visual, isn’t it?

That’s my review of Hell Bent, the Season 9 finale of Doctor Who.*

SPOILER ALERT! As I told editor Mike Gold on the phone last night after the broadcast, I though that Stephen Moffat was about to pull some time-winey stuff when the Doctor and Clara stole the TARDIS – taking us back to the very beginning of the story, with Clara “renaming” herself Susan, i.e., the Doctor’s “granddaughter.”