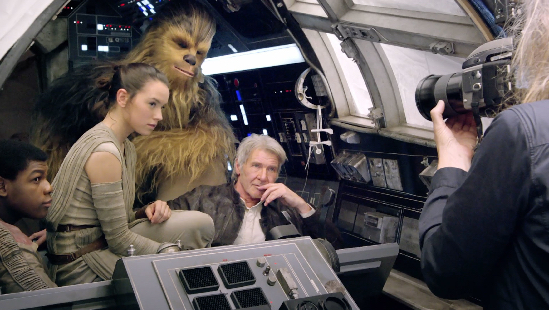 By the time you read this, there will only be 46 days, 5 hours, 29 minutes, and 7 seconds until Star Wars: The Force, Black to the Future debuts. OK, I’m not even sure if that time calculation is right. I mean, who knows when you actually read my article, right? The point should not be missed though: the hype train is in full force for the next installment in Mickey Mouse’s epic empire. And boy howdy, could I give two poops less about it all.

Forgive me, Star Wars fans. The force is so very, very weak with me. My generation didn’t grow up with Star Wars, unless we had older brothers or sisters. Return of the Jedi debuted when I was two. And by the time I was old enough to even absorb any of the original trilogy, video rental was still only a rare occasion in my household, although Voltron was the singular entity that was a must. When Lucas re-released A New Hope and its brethren, I was deep within the heart of my own adolescence; so I eventually came to understand and appreciate the fandom. I won’t lie: I bought myself a lightsaber. I owned more than a few of the franchise video games, X-Wing vs. Tie Fighter being the crown jewel. I even spent a summer enjoying the collectible card game. But all of this was at an arm’s length.

When Phantom Menace debuted, I recall the insanity that swept the nation. Star Wars permeated every available licensing opportunity in every retail establishment as far as the eye could see. And then the movie actually came out. I remember the apologists extremely well. Sure, look past the overused CGI. Ignore the banal plot circling around trade negotiations. Pay no attention to Jar Jar Binks, Watoo, or any of the other obvious stereotypes that apparently caused no undue stress for the focus groups. But we all knew it. As good as the original movies were, the next generation of Star Wars felt hollow. When they made A New Hope, you could feel the … well… hope. By the time we’d reached Jedi, Star Wars was more machine than man. The prequels never had a chance.

Time heals all wounds … and J.J. Abrams heals all franchises. At least enough to please Disney and Lucas to pass the reigns over to him. And well they should. I happened to catch his Star Trek on basic cable the other night (I’d seen it in theater, but not since), and truly it held up. Not that any previous Trek movies were ever Star Wars in terms of mass appeal and profit, but the concept remains the same: Abrams is handed the keys to the castle, and is left to accentuate what we love, and maybe shine it up a little bit. But mark my words, we’ll be one misplaced lens flare away from instant satire.

But that isn’t why I’m ranting today.

Amidst the ramp up for The Force Awakens a few tidbits have permeated my news feed. Amongst them was the odd rise of a few bad apples calling to #BoycottStarWarsVII, via a Twitter campaign. Their argument: the new lead, John Boyega, is black. No, I couldn’t believe it either. I mean, sure, boycott Star Wars because Phantom really was that bad. Boycott it because the Hateful Eight will be coming out close to it and Tarantino has never steered us wrong.

To have a few trolls even insinuate that the placement of a black actor, or female in the lead of a major franchise was reason to save one’s shekels is laughable to me. So much so, that upon seeing it being mentioned on my news feed made me initially believe it to be the brainchild of a viral marketing campaign. Want to fight social injustice? See Star Wars. Tell me it’s not brilliant. But alas… there truly are still openly racist idiots throwing stones at an impenetrable fortress, in hopes of toppling a giant they can’t even comprehend. I’d like to think the franchise got it’s fill of minstrel tap dancing after Episode III ran final credits.

Far more disturbing to me than a few errant racists with Twitter accounts are the baby boomers with Facebook. I’ve seen more than a handful of reposts already calling for the “Spoiler Free” sharing of elation for one week after the film debuts. Because people aren’t capable of just avoiding Facebook until they see the movie. Or just as scary, the celebration of Star Wars Day at K-Mart (or Toys R Us, or Target, I think), wherein fans waited in line for hours for the opportunity to buy some toys. Or frightening me down to my core… the news that Fandango and AMC crashed like the Titanic over people preordering their tickets to opening night. That night well over a month and half away. I couldn’t even get a show time next week for Trumbo without consternation. Egads.

Look. I get it. Star Wars is to many of us, the literal gateway to our eventual geekdom. It’s what lay-people and nerdlingers can unite in mutual love for. The gentle hum of a lightsaber brings men to their knees, and boys to their feet. And to know that Han, Chewie, Luke, and Leia will once again be in our lives? Well the only thing that could make that better is if a soccer ball was a droid. Wait. It is?! Great googly-moogly, kiddos…

How can we just sit here and wait? Oh yeah! Patiently. At the end of the day, it’s only a movie. Even if it turns out to be as amazing as we’ll all hope (note: it won’t be, but it’ll be great), Episode VII will always miss the crucial ingredient that A New Hope had a long time ago. In a galaxy far away, The Force Awakens won’t have the magic of being something we haven’t seen before.