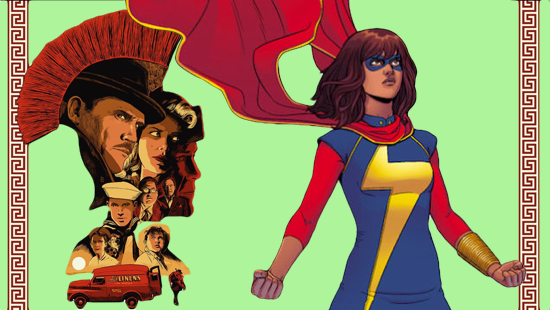 This past weekend, myself and some of the other ComicMix columnists went to see Hail, Caesar!, the latest film from the Coen brothers. I don’t want to speak for everyone else, but the general consensus as we all exited the theater was one of enjoyment. Personally, I thought it was one of the better Coen brothers’ films.

That being said, the movie has some possible drawbacks. For those of you that don’t know, Hail, Caesar! is a period piece taking place in Hollywood in the late 1940s revolving around the choices a studio executive has to make. They do a great job with it all, and really suck the audience into the setting. Although the movie is certainly lacking heavily in the diversity department, you might have just given it a pass considering the combination of the time period and the subject matter.

I’d have been more likely to give the movie a pass as well if it weren’t for this interview the Coen brothers gave. In it, they use some poorly selected words to describe what they think about diversity in movies. They claim that writers do not think about diversity as they come up with stories.

Now look, this doesn’t make the Coen brothers bad film makers. It makes them presumptuous to think that other writers in the business don’t consider diversity when writing, and that demonstrates their values are not the same as mine, but that doesn’t mean that they are inherently bad. And they have the excuse this time of doing a period piece, so it’s okay that it’s all white.

Outside of even the #Oscarssowhite controversy, I understand the idea that the executives at the studio, the actors at the studio and many others would be white. Really, I get it. However, nearly everyone we see on screen of consequence or not is white. All of the random celebrities that make an appearance in this film even for a scene or two are white. I don’t want to get into any spoilers, but we do see groups of people that you would imagine would have some more diversity in them. Perhaps not showing that diversity was a commentary the film was making, but if it was that never came across in the film.

This is a multilayered problem. Of course we can point to the Coen brothers both being white, having their own life experiences from that, and drawing from those in their writings. Another problem is one they point out in the interview I linked to above about how it’s not fair to single out a particular movie and question the level of diversity in it. Though they answer this question poorly, they do have a point and that makes this all the more complicated and difficult.

The Coen brothers did not get into film making to preach diversity; they’re making films because they want to tell the stories they want to tell. The problem isn’t exactly with individual movies. Everyone who makes it that far in the business should be able to attempt to make the movies they want to make. The problem comes when most of those people are white, and want to tell stories about other people who are white. It’s a difficult situation to tackle without an easy solution as this is an institutional problem, not an individual problem.

I feel this problem is driven heavily by our obsession with nostalgia. The good old days! The “simpler” times. Hail, Caesar! harkens back to a “simpler” Hollywood with overtones of the complexity of the red scare. The movie still paints a very black and white picture of that time. It keeps it simple. It glosses over the oppression part. Now, going back to my point earlier, this movie should not be held to such a high standard as to accurately depict the complexity of the time period. The problem comes down to that we have too many individual examples of this and not enough examples of movies not in nostalgia’s lens.

Naturally, I started linking this movie I was watching to parallels with the comic book industry.

This is a problem that’s been affecting comic books for a long time as well, and more recently comic book movies. I’ve touched on this before in other columns, particularly this one about Captain America. Since I’ve written that, we’ve seen articles like this one come out about comics that are in danger of being cancelled. It’s interesting to note that five of the ten comics listed star either a woman, black, and/or queer character. On top of that, another one of the ten comics listed is written by Gail Simone, one of the highest profile women in comics, and another of them stars Hercules which caused controversy when it was announced that he would not be depicted as bisexual this time.

Alarms should be going off in your minds right now. The books on the chopping block are disproportionately underrepresented groups in comics, and by a rather large margin. And similar to what the Coen brothers brought up in their interview, it is not the individual creators’ faults. This isn’t an individual problem, it’s an institutional problem. Just like with movies where we have a disproportionate about of famous white actors that are a draw at the box office like George Clooney, Channing Tatum, and Scarlett Johansson, and directors like the Coen brothers, comics have a disproportionately high draw with white characters and creators from Batman, Superman, and Wolverine, to Geoff Johns, Brian Michael Bendis, and Neal Adams.

It is not the fault of any of the individuals involved that they’re white. It’s not their fault that they’re successful or that they draw an audience. However, decades of entrenchment in the comics medium has created a class of successful white, mostly male creators and white, mostly male creations. Just like with Hollywood, TV, literature, you name. And latching on to nostalgia only keeps the cycle going on and on.

For comics, trying to solve this problem seemed to backfire. Over at DC some months ago, the editors there told their creators to “stop Batgirling” and to go back to the “meat and potatoes.” My initial take away from that was one of disappointment. Watching Hail, Caesar! and reading what the Coen brothers had to say has changed my attitude on this.

I think it’s great that both Marvel and DC have put at least some effort into making their product line more diverse. The Coen brothers are also right to believe they don’t have to consider diversity in the movies they want to make (whether I agree with them or not). And it’s a reminder that many, many people out there really don’t care about diversity and they don’t want to care about it either.

In Hollywood at least, movies like Creed, Straight Outta Compton, and even Star Wars: The Force Awakens are shaking things up and have the positive reviews and profits to back up their success. At Marvel and DC, they’re still in the process of figuring out how to shake things up in an equivalent sort of way. DC’s approach, which was admirable, spread itself too thin. They put too many titles out that were doomed to failure. They were doomed because they were rushing to capture an audience that hasn’t been properly cultivated yet.

It took time before Batman, Superman, Spider-Man, The X-Men, and many others were solid franchises deeply entrenched in our culture. Too many Bat titles or Avengers titles compete with these younger characters and titles and prevent them from having an equal chance, as I discussed the other week with Sam Wilson as Captain America and his almost certain end not long after Steve Rogers comes back.

Perhaps a possible solution is to invest highly in a small number of newer characters, like Kamala Khan at Marvel, build them up, entrench them in our culture to allow them to gain some permanence rather than spread diversity too thin and watch books rise and fall fast. Or maybe the world has changed too much where characters like Batman, Superman, and Spider-Man would never be able to be created and become kind of franchise juggernauts in comic that they are today and entrenching a new character like Kamala Khan just wouldn’t work the same.

Nostalgia is a powerful force, and that’s a force that is not only unavailable to help characters like Kamala Khan and characters from other underrepresented groups, it’s a hindrance. Not only to cultivating these new characters, but it’s a hindrance to us and getting us out of our comfort zones.

Is there anything that can really be done about this in the short term? I’m not entirely sure. It’s something for me to think about. Maybe for you too.