Dennis O’Neil: Have I Offended Anyone? 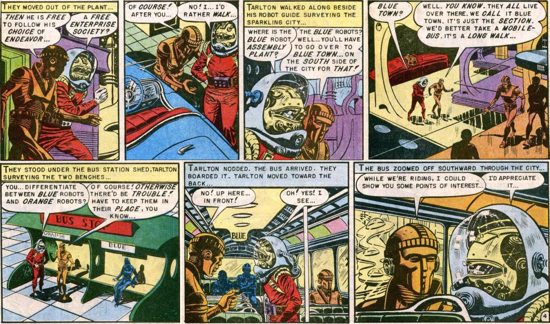 So there’s some kind of election going on? Well, not in comicbookland there isn’t and maybe that’s just as well.

Last week, we blathered about the lack of ethnic diversity in mass entertainment, particularly regarding names, and suggested that the purveyors of such entertainment didn’t want to alienate potential customers by giving their heroes traits that some might find offensive. And it doesn’t stop with names.

You may have noticed, the more astute among you, that we as a nation are embroiled in what is surely the daffiest presidential contest in our history, and by “daffiest” I don’t necessarily mean most entertaining. On the contrary: I’m disgusted with it. But we’re stuck with it until November and then, if the results are not to my liking, I may consider some serious depression.

Politics generally plays no part in the procedurals that glut television, and even less in comics stories, and given the nastiness of our current national conversation, maybe we should be grateful. Here it is again, that fear of losing audience in action.

I’m not complaining. Mostly, we go to our screens and pages, not to be proselytized but to be entertained, and we don’t have to know everything, or even much, about a character to be amused by said character’s adventures. (Do we know how Spider-Man likes his coffee? Do we care?)

Let’s forget about television and movies for the moment and concentrate on comics, which have almost entirely avoided politics. I don’t recall any comics that labeled a character Democratic or Republican, or even Independent, or anybody in comic book political campaigns being identified by party. Maybe Abraham Lincoln. But comics have, occasionally, touched on subjects that concern politicians – or should concern them. There was, for example, an excellent short story in EC Comics’ Weird Science, published in 1953 and titled “Judgment Day.” It is as relevant today as it was 63 years ago and, given the subject matter, bigotry, that’s a shame. In an early Superman story our Man of Steel give the what-for to a wife beater. And in the early 70s, Neal Adams and I did a series inspired by the state of the world. All this and much more were possible political concerns, but they nothing to do with parties and precincts and superpacs and the rest of the kerfuffle of modern politics.

You may have noticed that I haven’t mentioned religion. You’re right. I choose not to step into that particular quagmire. Ah, but why? Religion, as a subject for stories, is certainly pertinent to our discussion. The boundaries are relaxing and once in a while, character’s religious preference is specified. But this is new. Throughout the history of the media, religion has been largely avoided. (When it is part of a narrative, it usually affirms that what the parson told you about the Lord and going to Heaven was absolutely correct and don’t give me any of your sass, young man.)

Come to think of it, why have I not engaged what some might call spirituality here? Could it be that I’m afraid I’ll offend someone?