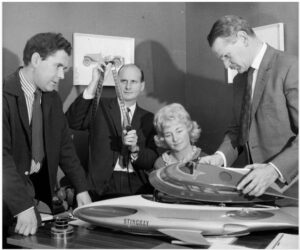 Sylvia Anderson, co-producer of the iconic Supermarionation series including Thunderbirds, passed away at her home in Berkshire at the age of 88, after a brief illness.

Her daughter Dee Anderson said of her, “Her intelligence was phenomenal but her creativity and tenacity unchallenged. She was a force in every way,”

Sylvia worked with her husband Gerry on all of their puppet shows, becoming a co-producer starting with Stingray.  She voiced numerous characters for the shows, but is best known for portraying International Rescue’s London Operative, Lady Penelope Creighton-Ward in the classic series Thunderbirds.

Her ex-husband Gerry passed away in 2012 after a battle with Alzheimer’s.  The production company named after him recently produced three new episodes of Thunderbirds in the classic Supermarionation style, using soundtracks of audio plays released on record during the show’s original run.  Sylvia made a return to the franchise via the new CGI series Thunderbirds Are Go, playing Lady Penelope’s (now voiced by Rosamund Pike) Great Aunt Sylvia.  Sylvia was one of two members of the original cast to return for the series, along with David Graham, reprising his role of Parker.

I’m giddy as a schoolgirl, and I don’t know what to do with my hands.

Gerry Anderson’s Thunderbirds is as major a lynchpin of my childhood as M&Ms, my Big Jim collection, and faking sick to stay home from school…usually to watch Thunderbirds. The Tracy brothers, launching rescue missions from their secret island, was filled with edge of the seat action, staggering special effects and miniatures, and engaging character work.  This is made more impressive that the characters were played by marionettes.  Electronically keyed to the dialogue and incredibly detailed, but marionettes nevertheless.  The show is as well-loved and respected worldwide, but most so in England, where it’s as beloved as other Sci-Fi touchstone Doctor Who.  So it was rather a given that they’d go for a remake of the series eventually, and the 50th anniversary is just too tempting for anyone to pass up. END_OF_DOCUMENT_TOKEN_TO_BE_REPLACED

Anderson Productions has launched a Kickstarter campaign today to fund production of a pilot for Gerry Anderson’s FireStorm, a new adventure series in the tradition of the original Anderson series like Thunderbirds and Stingray. Only hours after its start, the campaign has already been 25% funded of its initial goal.

Once funded, the pilot will be filmed in “Ultramationation”, described as a new hybrid process “using a combination of puppetry, practical effects, physical props and sets, and model miniatures”. Fans of iconic Gerry Anderson shows like Space: 1999, Stingray, Captain Scarlet, UFO and Thunderbirds will be able to back the project to help fund the pilot episode in return for special limited edition rewards from props and collector edition DVDs, to set visits and film credits.