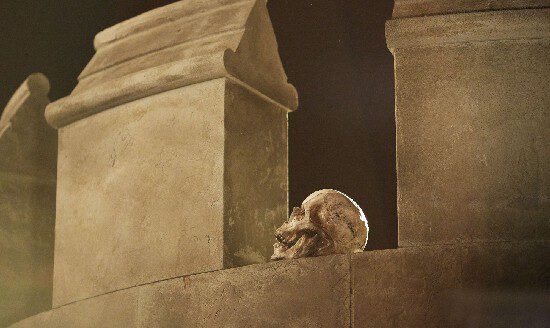 Clara: I don’t know where I am. It’s like I’m breaking into a million pieces and there is only one thing I remember: I have to save the Doctor. He always looks different. I always know it’s him. Sometimes I think I’m everywhere at once, running every second just to find him. Just to save him. But he never hears me. Almost never. I blew into this world on a leaf. I’m still blowing. I don’t think I’ll ever land. I’m Clara Oswald. I’m the impossible girl. I was born to save the Doctor. • The Name of the Doctor, Doctor Who, Series 7

Last week’s column (Paul Is Dead) was my bitchfest against the suits of the BBC and their relentless “wink-wink” interviews and spoiler-y “previews” of what’s to come on this season of Doctor Who. That it’s gotten so bad that “I’m expecting any moment to see an announcement… that Peter Capaldi wiped his ass after taking a shit.”

“Doctor Who is a globally enjoyed TV show that continues to make serious and heavy inroads around the planet. It’s also a programme that therefore has to – even though it’s a BBC show – dance to the ratings game a little. As a consequence of that, the decision has been made somewhere along the line to release what I’d class as fairly significant spoilers in the build up to this episode, a few weeks ahead.

“I think – and it’s easy for me to say this from my perspective – that’s a mistake. Worse: I think it hurt the ending of Heaven Sent for those who had read what should have been a more spoiler-light synopsis – or at least a more time sensitive one – for Hell Bent, the series finale.

“Appreciating that Steven Moffat, a year ago, already began teasing the cliffhanger of this episode, for those of us who were exposed to spoilers ahead of time – and this wasn’t Internet chitter-chatter, they were formally released in a piece of publicity by the BBC – the reveal at the end of the episode lost a good chunk of its impact. Because we knew the Doctor was going to end up on Gallifrey. A big, geeky, nerdbump-generating moment had been sacrificed for many at the altar of the publicity machine, and that’s a real pity.”

Anyway, having experienced Clara’s death last week as an anti-climatic fallen soufflé, I stayed away from the Whovian universe – okay, I did read reviews and comments about Face the Raven at my favorite sites, which include Forbes, Vulture, Den of Geek, and Entertainment Weekly – and watched Heaven Sent with very little foreknowledge.

It made a huge difference, as I was able to not only simply watch Peter Capaldi’s amazing solo act, but also figure out what was going on, instead of waiting for the fait accompli.

SPOILER ALERT. In no order at all:

Not just the castle, but also the Doctor’s life is being continuously reset; those billions of skulls at the bottom of the sea are his.

Room 12 is his room, the twelfth Doctor (purists can shut up right now about Capaldi being the 13th reincarnation), which is why Clara’s portrait hung there.

The portrait is so old that the paint is cracked and flaking away. (This was actually when I realized that the Doctor had already been in that castle for centuries, if not thousands, of years.)

The Veiled “Thing” was something born of the Doctor’s own nightmares and fears and guilt and lies, which was why telling the truth stopped it. (Here I was expecting the Doctor to admit that he was ultimately the cause of Clara’s death, since her arrogance and recklessness was patterned on the Doctor’s own behavior.)

The word “Home” written on the “impenetrable” wall – I knew what that meant: Gallifrey.

That was the best part of the episode for me, as (perhaps?) for one last time, the “Impossible Girl” who has been there at every crisis in all the Doctor’s numerous lives pointed him in the right direction and told him to “get up off your arse and win.”

Why was it the best part of the episode for me?

“Don’t it always seem to go,

“That you don’t know what you’ve got

Though I loved her incarnations as a Dalek and as a Victorian barmaid/governess, I never really “got” the modern-day Clara. She never felt truly defined for me – though now that I think of it, perhaps that was the point. Clara the individual stopped existing the moment she stepped into the Time Vortex – and because of all that “time-winey stuff,” she had done it before and would do it again – so that even the Clara we saw through Matt Smith’s time as the Doctor, and even now with Peter Capaldi, is still only a shade, a shadow, a piece of shattered personality. Which is why we saw modern-day Clara as a babysitter, then a teacher, then a lover and would-be wife and mother, a “member” of UNIT, and, then, finally, as an adventurer and “Time Lord.” It was as if Clara was trying on and discarding clothes in a department store fitting room, or walking through a funhouse Hall of Mirrors looking at all her distorted reflections. She seemed to be constantly asking herself, “Which one is the real me?”

But I finally felt Clara’s death.

One more thing I believe I have figured out…