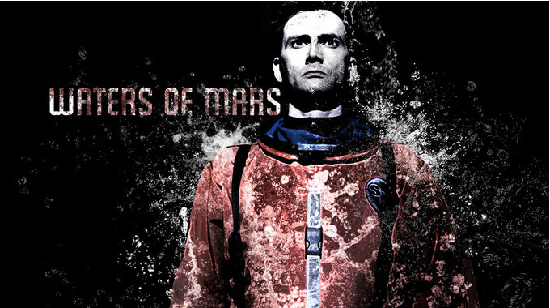 Don’t blink. Blink and you’re dead. They are fast. Faster than you can believe. Don’t turn your back. Don’t look away. And don’t blink. Good Luck. • The Doctor • “Blink,” written by Steven Moffat

Adelaide: But you said we die. For the future. For the human race!

The Doctor: Yes, because there are laws. There are laws of time. Once upon a time there were people in charge of those laws but they died. They all died. Do you know who that leaves? Me! It’s taken me all these years to realize that the laws of time are mine and they will obey me! • The Waters of Mars, written by Russell T. Davies

Like you, John, I’ve been in the midst of the summer doldrums eagerly awaiting the return of new episodes of Marvel’s Agents Of Shield, Downtown Abbey, The Flash and, of course, a certain alien from Gallifrey.

Saturday night I tuned into BBC America to watch the first two episodes of The Doctor’s Finest, the network’s lead-up to the premiere of Peter Capaldi’s second year as the Time Lord, otherwise known as Series 9 of the modern era Doctor Who, or the 52nd year of wibbly wobbly timey wimey…stuff. (A bit more on those five little words a few paragraphs down.)

Hosted by Hannah Hart of My Drunk Kitchen on YouTube, and with “special guests” and “behind-the-scenes” interviews, the next four Saturday nights will feature two “essential” episodes of the Doctor’s story – “essential” in this case meaning that in some very important “essential” way these stories have contributed to the still-evolving mythos of the Whovian universe.

First up was Blink. Here’s a brief synopsis:

2007. In an abandoned house on the outskirts of London, photographer Sally Sparrow – the absolutely terrific Carey Mulligan – finds statures of weeping angels, and an even creepier message hidden under the wallpaper: ‘Sally Sparrow. Beware the Weeping Angel. Love from The Doctor (1969).’ The next day, Sally returns with her friend Kathy Nightingale – who suddenly vanishes. As Sally looks for her in the house, a man delivers a letter addressed to Sally from his grandmother, who has recently died. The grandmother’s name? Kathy Nightingale. And she has a message for Sally.

Meanwhile Kathy’s brother, Larry, who owns a DVD shop, has been tracking down “easter eggs” found in 17 unrelated DVDs, featuring a man with glasses who seems to be having a conversation with the viewer. The man is the Doctor – David Tennant – trapped in 1969 without his TARDIS. And the “easter eggs” are for Sally.

Blink, written by Steven Moffat and based on his short story “‘What I Did on My Christmas Holidays’ By Sally Sparrow” in the 2006 Doctor Who Annual, is essential because it introduces the Weeping Angels, im-not-so-ho the creepiest and scariest of all of the foes and “monsters” ever seen on Doctor Who. They also appeared during Matt Smith’s run as the Doctor in the two-part “The Time of Angels/Flesh and Stone” and, most notably, as the adversaries responsible for the “deaths” of Amelia Pond and Rory Williams in “The Angels Take Manhattan.”

The episode is also the first time we hear five essential words as the Doctor attempts to explain the concept of time to Sally: “People assume that time is a strict progression of cause to effect, but actually, from a non-linear, non-subjective viewpoint – it’s more like a big ball of wibbly wobbly…time-y wimey…stuff.”

My Saturday night Whovian feast continued with the 2010 special The Waters of Mars, which won the 2010 Hugo for Best Dramatic Presentation, Short Form, and was Russell T. Davies’s last episode as writer/showrunner.

November 21, 2059. The first human colony on Mars, Bowie Base One. The Doctor – David Tennant – is there on this pivotal day in history, when the colony is destroyed in a nuclear blast. But it is precisely this disaster that inspires the granddaughter of the mission’s leader, Captain Adelaide Brooke (Lindsay Duncan), as well as the rest of humanity, to continue their journey into deep space exploration and colonization.

The fixed point in time is an “essential” concept in the Whovian universe – and it is in The Waters of Mars that the Doctor is brutally taught that not even he, the “Victorious Time Lord,” as he refers to himself towards the climatic moment, is capable of changing it.

For it is not precisely the destruction of the colony that is the crucial event, but (SPOILER ALERT) Captain Adelaide Brooke’s death that is the necessary, critical, fundamental and central point – a fixed point in time – on which the future of humanity rests. If she does not die, her granddaughter, Susie Fontana Brooke, will not pilot the first faster-than-light spaceship to Proxima Centauri, nor will her other descendants, nor humanity, follow her into space. And so Adelaide accepts her fate, and confronting the self-congratulatory Doctor who has saved her – “I don’t care who you are…the Time Lord Victorious is ‘wrong’.” – walks into her home and kills herself with her laser gun.

“Your song is ending…he will knock four times.” The Doctor has been running from a prophecy of his death (“Planet of the Dead,” “Planet of the Ood”) as a fixed point in time. This episode (though not “officially” part of the final arc – “The End of Time” – leading up to the regeneration of Tennant into the 11th – I mean the 12th – Doctor, Matt Smith) is essential in its portrayal of Tennant’s Doctor’s dark side.

He is the last of the Time Lords, and in his arrogance he no longer believes that he has to obey the rules. Two rules especially – the first being that he cannot change a fixed point in history, and more important, and more personal, that he must die and regenerate. Just as he refuses to accept the death of Adelaide Brooke and her mission mates, he refuses the prophecy, even going so far as to deliberately electrocute one of the mutated members of the Mars mission to stop him from “knock[ing] four times” on a bulkhead door.

Time is not just a wibbly wobbley time-y whimey ball of stuff.

Not even for a Time Lord.

And that is the essential lesson.