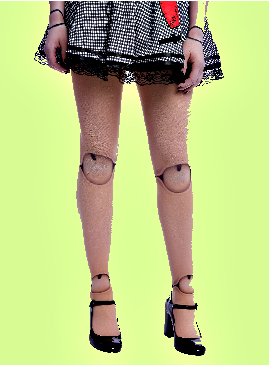 Happy post-Halloween, everyone! I hope it was spooooky and fun and sugar-coma-tastic. Man, I love Halloween. And this year I had a big party to go to, so I decided to go all out on my costume, a creepy “broken doll.”

Even though this year’s costume was not specifically geek-related (unlike that year I went as Black Canary and everyone thought I was Lady Gaga… sigh), I had a great time putting it together, and since putting together a good costume is part of the fun for me at some conventions, and I haven’t done a costume how-to (Emily-style!) in a while, I thought I’d give it a whirl with my Halloween getup.

I am unashamed to admit that this year’s costume idea came from an email Hot Topic sent out advertising their Halloween costume pieces. (And FYI, if anyone else is remembering the days when Hot Topic mostly contained black things covered in spikes, you are now on notice that these days it also contains a lot of awesome geek and pop culture clothing and collectibles.) Although I do like to try to come up with my own spin on costume things, my starting point was definitely the Doll Leg Tights on the Hot Topic site. I saw them and just thought, “A life-sized doll. What a cool, creepy idea.” Especially since I have a weird fascination with the idea of dolls (and other toys) coming to life (wherein depending on the toy, you either wind up as one of the humans in Toy Story or in Chucky and who can say which it will be until it’s too late? See also: the evil doll in the new Ash vs. Evil Dead show, which is hilariously cute-evil).

Unfortunately, by the time I realized I wanted to do a creepy doll costume the tights were all sold out. Undeterred, I thought, “How hard can it be to make doll legs?” Well. Not as easy as you’d expect, actually, but then again, nothing ever is in costuming. That’s what makes it fun! (And after all, it’s not Emily-style costuming unless you attempt to make something you’ve never made before from scratch with little idea how and almost no time to spare.) I decided to give it a go, and ran through the options of drawing them on with makeup, creating some custom temporary tattoos as I have for previous costumes, or using permanent marker (either directly on my skin, or on tights).

I nixed the idea of makeup because I didn’t want to have to worry about it smearing and coming off on things, and I decided against the temporary tattoos because I didn’t have time to properly fit and scale them in Photoshop. A friend informed me that drawing on yourself with ink or permanent marker is bad for you (oops for all those years I waitressed at the Arts Center and doodled on myself in between orders). So I decided to try permanent marker on light-colored hose. It…did not go well. It turns out, permanent marker is not actually permanent on hose. Instead, it gets all over everything. Ick. Fortunately, at that point I remembered my cache of fabric paint (d’oh!); and in the end, that’s what I used. (I have been informed that Michael’s also has fabric markers, so that might be an option for other DIYers, but I didn’t have time to go buy any).

The fabric paint worked pretty well, considering. It’s not super easy to paint on your own legs, but in the end, and using some photo references, I managed some acceptable doll ball joints. Given I was going as a broken doll, I then added a bunch of cracks, which was the fun part. It was kind of like painting lightning; and I also discovered that making some of the cracks really black in the center gave them a more realistic look, for added creepy brokenness. I then managed to create arm-hose by cutting apart a pair of regular hose and then cutting finger-holes in the toes (pro tip: because hose stretch so much, the finger-holes can be only a few millimeters across when you cut them; and you can then use a thin line of clear nail polish around the cuts to stop runs). And then, of course, I painted on them, too.

I was pretty happy with the end result for a first attempt, although as a fair warning to anyone else who wants to try this, some of the paint does bleed through and will thus have to be scrubbed off afterwards, and also touched up on the hose before a second wear. But the Tulip brand of fabric paint I used wasn’t hard to get off.

Once I had the arms and legs out of the way, the rest of the costume wasn’t too challenging; although I did also do some fancy-schmancy nails in one of my favorite greens to match, and those took some time. But fancy dolls have to have fancy nails! (For my fellow nail polish addicts, that’s China Glaze Smoke and Ashes from the Hunger Games line, Wet N’ Wild Spoiled in Correction Tape, and Sally Hansen Lacquer Shine in Glow.) As per the Emily-style costuming method, I love to repurpose costume pieces I’ve used before. Therefore I decided that this doll was going to be a sort of dark harlequin/ballerina-style doll, and pulled together the green corset and fluffy black skirt that originated in an Absinthe Fairy costume, a black lace shirt with puffed sleeves that’s played its part in my Discworld ensembles, and ballet flats that, quite honestly, are part of my regular work attire.

That just left hair, makeup, and accessories. For whatever reason, despite my hair’s inherent general inability to hold any curl whatsoever, I discovered recently that it will stay naturally in simple curled pigtails (weird!) so I opted for those, helped along by hair spray for a little extra staying power, and accented with black ribbon bows. The necklace was actually a Hot Topic purchase I’d never found anything to wear with before, but it set this ensemble off perfectly; and the earrings added a nice additional pop of green to a fairly dark outfit.

The makeup job was a bit tricky, I’ll admit; but it had to be right to pull the costume together. Fortunately, the set of colors I usually use for Harley Quinn could be repurposed for this (and can be acquired at your local CVS). For anyone who wants to replicate the look, I started with circles of Maybelline’s “Dream Bouncy” blush in Plum Wine, which is a cream blush that stays put and shows up well under powder. The powder went over my whole face and is Manic Panic’s “Virgin” Pressed White Powder, which is of excellent quality. I then drew on dark, fairly thin eyebrows with a black brow pencil to get that more doll-like look.

Next up were the eyes – with white around the outside on the bottom, and on the upper lids, to make them look unnaturally large and doll-like (Milani’s Runway Eyes in Backstage Basics has a pearly white that I used). Under the eyebrows I used the basic brown in Revlon’s Illuminance Cream Shadow set, with a touch of the shimmery brown on the inside areas, to make the eyes look like they were more deeply-set. Once I had the basics done, I drew the shape of the bigger doll “eyes” and eyelashes underneath in black liquid eyeliner, and filled in the lower half of my upper lids with the same, getting wider towards the outside of the eye. I finished the eyes with some fake eyelashes on the upper lids to add to the blinking doll effect.

The black eyeliner was also what I used to draw the “cracks” on my face, and worked very well for that because of the liquidity and fine tip on the eyeliner brush. I finished off the look with a lipstick base of Maybelline “Bare All” (originally acquired for my Orphan Black Helena costume) to get rid of my natural lip color, then drew on a smaller, rounded pair of doll lips using Milani Easy Liner in Sugar Plum, Revlon Ultimate ColorStay Liquid Lipstick in Brilliant Bordeaux, and Revlon ColorBurst Lipgloss in Bordeaux. Et voilà! Creepy broken doll face, and Creepy Broken Doll.

After that, all that remained was to go hang out at an awesome house party with the likes of Rose Quartz and Miss Fisher and Daredevil and to happen upon some great settings like this pumpkin-filled alleyway or this old trunk and stone wall in which to take some super creepy doll photos.

So there you have it, folks! A Halloween how-to. Hope it’s helpful to any fellow costumers out there; and until next time, Servo Lectio!

…Because if you don’t? I WILL EAT YOUR SOUL.