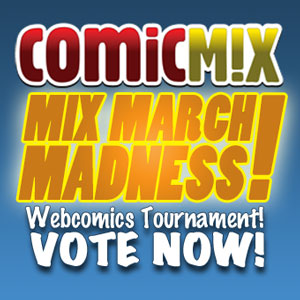 UPDATE: Round 3 voting has ended… but click here to vote in Round 4!

Even heavier voting this time around, with the least voted contest getting 2800 votes, and the highest over 7500. We think we’ve knocked out most of the server problems, and thank you for your patience.

Round 3 starts right now, and ends this Saturday night at 11:59 PM, Eastern Daylight Time. We’re down to 16 contests, and it only gets tougher from here… so vote already!
END_OF_DOCUMENT_TOKEN_TO_BE_REPLACED

UPDATE: Round 2 voting is closed! Round 3 voting is open right now!

128 webcomics are down to 64, and the battles continue!

The last round of voting was much more than we anticipated, with almost each of the contests getting more votes than last year’s final round. The server started to have problems, compounded with what we think might have been bot attacks to affect some voting. We took the weekend to try and get things right, and we think we’re ready for the next round. (And yes, we’re trying to figure out what remedy, if any, we should apply.)

Round starts right now, and ends this Wednesday at 11:59 PM, Eastern Daylight Time. We’re down to 32 contests, so go vote already!
END_OF_DOCUMENT_TOKEN_TO_BE_REPLACED

Vote in the Mix March Madness 2012 Webcomics Tournament First Round!

UPDATE: Round 1 voting is closed! Round 3 voting is open right now!

First, thank you to the thousands of people who voted in the nominating process, as well as all of you who added your favorite webcomics to the list. We’re adding all of the webcomics you suggested to our directory.

These are the top 128 webcomics you’ve chosen, and we’re running a single elimination tournament to winnow down to the favorite. There are so many webcomics, we’ve had to break them up into four divisions– Giraud, Moldoff, Robinson, and Simon. The winner of each division will get $25 in their tip jar and advance to the Final Four. Whoever ends in second place will get $50, and the winner will walk away with $100. UPDATE: And if you’re first to pick the Final Four, you will win a $50 gift card from Amazon!

The first round starts right now, and ends Friday at midnight. We’re starting with 64 contests, so go vote already!
END_OF_DOCUMENT_TOKEN_TO_BE_REPLACED

UPDATE: Click here to vote in the third round now!

Yes, it’s that time of year again, the time where bracketology reigns supreme and the cry around the nation is “Win or Go Home!” Last year’s Webcomics Mix March Madness was incredibly popular, and so we’re doing it all over again. The problem? There are so many good webcomics out there, and we’ve found more this time around (and we skipped a bunch last time).

So we’re opening it up to you. END_OF_DOCUMENT_TOKEN_TO_BE_REPLACED

Mix March Madness, Round 4 – The Quarter-Finals!

This month we took sixty-four popular webcomics and put them head to head in a single-elimination tournament. We’re now in round four– the Quarter-Finals!

We’re down to the Elite Eight… Penny Arcade, Kawaii Not, A Distant Soil, Gronk, Erfworld, Wondermark, Girls With Slingshots, and Questionable Content!

The updated contender brackets are below:
END_OF_DOCUMENT_TOKEN_TO_BE_REPLACED

This month we took sixty-four popular webcomics and put them head to head in a single-elimination tournament. We’re now in round three– the Sweet 16!

Erfworld continues its dominance in the brackets, with Kawaii Not showing surprising strength. Theater Hopper is surprisingly quiet, but they’ve gotten late traction before.

And at this point, nobody has an insurmountable lead– anybody can make a call out to their followers and retake the lead, and after two days of hand-to-hand electioneering at C2E2, the scores can really change. Every match is still too close to call.

So get your votes in– and see who becomes the Elite 8!

Our own logs are also showing respectable traffic going out to all the participating strips, and we’re getting reports of people reading entire runs at a shot– which has got to be spiking numbers for everybody, which was part of the idea.

END_OF_DOCUMENT_TOKEN_TO_BE_REPLACED

Round 3! We’ve taken sixty-four popular webcomics, put them head to head in a single-elimination tournament, and are now down to sixteen!

We had a couple of upsets in this round: XKCD losing to Kawaii Not, Questionable Content pulled ahead of Multiplex (thereby wrecking my hoped for battle between them and Theater Hopper) and in a battle that went down to the wire, Penny Arcade beat Sinfest by one vote.

We’re going to start stepping up the pace of voting: Round 3 (Sweet 16) will start tomorrow and last until Wednesday, Round 4 (the Elite 8) will start Thursday and end Saturday, Round 5 (Final Four) will start Monday the 28th and run till Tuesday the 29th, and the Championship battle will start Wednesday the 30th and end on the 31st.