Tagged: Devil in the White City 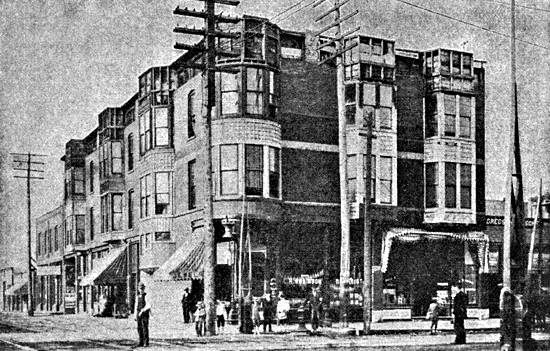 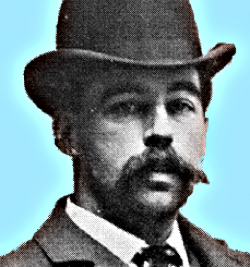 I was going to write about comics again this week; I usually do, and I’ve got all sorts of notes on a topic that can wait a week or two. ComicMix purports to proselytize about geek culture – or, as my fellow wordsmith Ed Catto calls it, “Geek Culture” – for the broader comic book fan audience. Glenn Hauman calls us the pop culture Huffington Post. I call us the Huffington Post from hell.

There’s nothing geekier than monsters, and our culture has sported quite a few real monsters. In this regard, perhaps you think of Hitler. He’s our go-to real life monster, a paranoid drug addict who earned his place as the 20th Century’s greatest metaphor. Maybe you think of Stalin, who was quite the monster even before he sided with Hitler, which was before he opposed Hitler.

No, today I wish to talk about the Greatest American Monster, dubbed The Torture Doctor. In fact, David Franke wrote a book about the guy in 1975 and he called it The Torture Doctor. Of course I’m referring to “Doctor” H.H. Holmes, often referred to as the first serial killer. That is not true; the first serial killer predeceased Holmes by a dozen millennia; his name roughly translates into Oog, and I’m sure his fellow homo habilises didn’t care much for him. But, I digress. 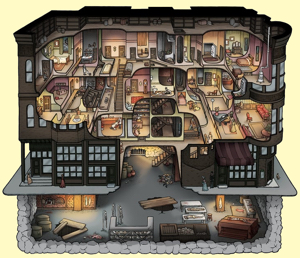 If a meticulous sequential mass murdering seducing charlatan swindler can be thought of as cool, Holmes was indeed that. Damn, his real name wasn’t even H.H. Holmes. It was Herman Webster Mudgett, but he was cool enough to understand that wasn’t the name for the ages. H.H. Holmes was much more cool.

Born at the onset of the Civil War, Mudgett graduated from the University of Michigan’s Department of Medicine and Surgery, acquiring skills that he would soon put to bad use. He moved to Chicago in 1886, adapted the more alliterative name and took a job as a pharmacist and errand boy at Elizabeth Holton’s drugstore at the corner of Wallace and West 63rd Street. When Holton’s husband died H.H. bought the operation from the widow, who then disappeared.

Three years later and three miles to the east, it was announced that Chicago had won the rights to the 1893 World’s Fair. They beat out New York; the term “the windy city,” applied locally since 1876, was immortalized by the distraught editor of the New York Sun, a one-time Chicagoan named Charles A. Dana. “Don’t pay any attention to the nonsensical claims of that windy city. Its people could not build a World’s Fair even if they won it.” Dana was mistaken. Not only did it build the truly dazzling World’s Fair, but it gave Holmes the idea of buying the block-long vacant lot across the street from his drug store and building a hotel. He called it the World’s Fair Hotel.

Clearly, he one of the most devious contractors in history. Holmes had an idea, a plan for the hotel. Only one person might have known the full plan – his subcontractors were limited to building various sections of the building with no one builder knowing the totality of the effort. Eventually the guy who acted as H.H.’s associate, Benjamin Pitezel, wound up prematurely deceased… as did his children. 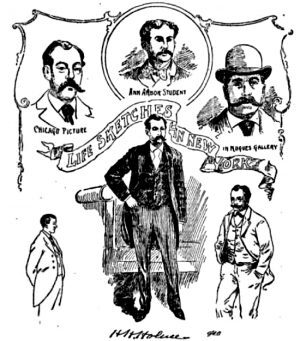 Dubbed “The Castle” due to its enormous size, it was later discovered the joint was littered with secret soundproofed airtight rooms, trapdoors, and chutes that led to the basement. The hotel mostly employed young women and mostly catered to young out-of-town women who were visitors to, or workers at, the Fair. There were secret gas lines, a special second floor hanging chamber, rooms for suffocation and starvation, and hidden passageways to the basement where many skeletons were preserved and sold to medical schools. The hotel had lots of modern conveniences, including two massive furnaces and handy pits of lime and corrosive acid.

H.H. Holmes was a man with a plan. Several plans, in fact, that seemed to address his sundry lusts, his desire for money, and a general distain for the fairer sex. He was also quite an experienced insurance swindler and, eventually, he and the three Pitezel children left town for Fort Worth, Indianapolis, Detroit, Toronto, Philadelphia and Boston. By then the Pinkertons had been hired by the insurance interests and they tracked the Torture Doctor down, where he was arrested and ultimately convicted of Pitezel’s murder.

Holmes confessed to 27 murders, although only nine were confirmed. It is generally believed he murdered upwards of 200 people, mostly women, mostly blonde. He married some of them, but that was just a formality – one we refer to as “bigamy.”

Holmes was hanged at the Philadelphia County Prison in May 1896, at the age of 34. Amusingly, execution witnesses said Holmes was hanged improperly and slowly strangled to death for 20 minutes. By this time The Castle had endured a massive fire; two men had been seen running away from the building just ahead of several explosions. The building was rehabbed and lived until 1938. Today, the site is home to the neighborhood post office and, in several weeks, a Whole Foods supermarket will be opening a block away.

Holmes’ story was immortalized in Erik Larson’s best-selling novel The Devil in the White City. Ostensibly, Leo DiCaprio will be playing Holmes in long-in-development motion picture. I gather Johnny Depp was unavailable.

The Castle endured for three decades, but here’s the real mystery. Pretty much ever since then, the Englewood neighborhood has been one of the most dangerous areas in Chicago – even today, with the city’s notoriously high murder rate, Englewood is one of two areas where most of these murders occur.