Dennis O’Neil, Will Eisner and The Spirit 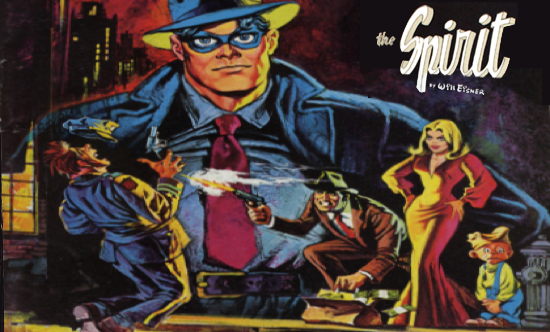 So here we are on the verge of spring again and it is time for Will Eisner Week, our annual recognition of comic book excellence, one I’m always happy to participate in. Anyone unfamiliar with Will’s stuff should remedy that post haste, either at your local comics shop or – I’m afraid this is virtually unavoidable – by aiming your computer at the, yes, folks at Amazon.

My personal, and much valued, acquaintance with Will began when friends stopped by my SoHo pig sty of a bachelor pad – the styness was my fault, not the apartment’s – on the way to hear him lecture in nearby TriBeCa. I knew who he was, of course: it would have been hard to be in the comic book biz back then, in, I’m guessing, the 80s, and not be aware of Will’s signature creation, The Spirit.

I first met The Spirit – and isn’t that a splendid first name? – when I was much, much younger, living with my parents in St. Louis, and, during summer afternoons with other future bibliophiles, trading comics. I probably remember The Spirit mostly because I didn’t quite get him, not the way I got Superman, Batman, Green Lantern and the legion of costumed good guys in the comics before educators and editorialists and just possibly the odd psychiatrist or two convinced large portions of the citizenry that these colorful vilenesses were shoveling our innocent youth into hell.

That unhappy time was still in the future. My problems with The Spirit were of a different nature. They had to do with Denny Colt himself. He bopped around a city fighting crime, but he wasn’t a policeman and he wasn’t exactly anything else. He didn’t have a costume (which was somehow, in comics, a license to engage evil) like Batman and others; he had a mask, sure, and gloves, but the rest of his clothing? A suit, a hat and – this galls me – a tie. His garb was a lot like that of – this galls me more – our current president. And he had no special powers like Superman (though I wouldn’t have wanted to be on the receiving end of a Denny Colt punch.)  So what was with him? Didn’t know. Back to Batman – him I got, at least kind of.

Flash forward to 1966, and join me in a gungy tenement on Manhattan’s Lower East Side reading the Sunday Herald Tribune. What I’m looking at is something special – a new Spirit story, the first in 14 years, written and illustrated for the Trib by Will Eisner. I am being knocked out and when I drop the paper I am a Spirit fan, thereafter on the lookout for any Spirit reprints I’m lucky enough to find. (There began to be a lot of them about then.

Jump ahead another few years and I’m doing a cabe tv show with Eisner, who I now know… a little. While I’m blathering, Marifran is standing off-camera with Will, whom she is meeting for the first time. When I join them, my gracious wife tells me that Mr. Eisner is coming to dinner. He does and Will and I spend an evening talking and Mari’s cooking convinces our guest that vegetarian food can be pretty tasty, When, at evening’s end Will gets into a cab and we have a new friend.

I am very proud of that.