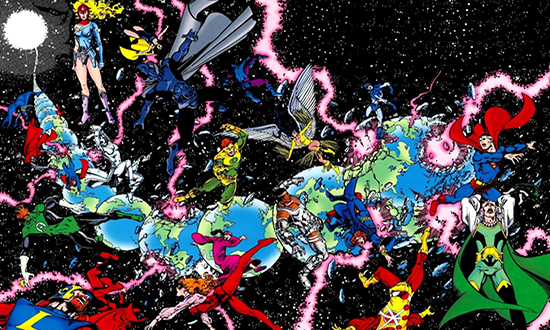 Pencilers are not always satisfied. Maybe they’re never satisfied. They’ll take a page or panel that they’ve drawn and if they don’t like it, erase the sucker and do it over. If they do it too often, it gets all gray and muddy. I got a page to dialogue once that was erased so often that I couldn’t really tell what the figures were doing. Based on the plot, I threw on a lot of sound effects and hoped for the best.

You can do that as a writer as well. You can worry a plot or an idea to death, to the point where nothing really makes sense. At that point, it would almost be better to scrap it and start over.

Comic book companies (we’re talking about DC and Marvel) can do the same thing with their universes. For decades, DC had a stable universe – to the point of static. It was easier; the stories in one book were rarely if ever connected to any other story in that book or the larger DC Universe. 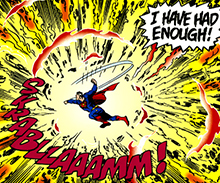 Marvel changed all that; their universe was very interconnected with stories and characters from one book often appearing or referenced in another. However, they were also proud of the fact that the continuity, once laid down, didn’t change (in theory if not lf not always in practice) even when that continuity creaked and groaned with age, begging for change.

These days, the universes (and some of the characters on them) flit by, get trashed, re-written, usually in a great company-wide crossover that promises that “Nothing will ever be the same again!” I’m not saying change is not a good idea; DC’s Crisis On Infinite Earths was a landmark event that DC desperately needed at the time. Marvel desperately needed barnacles scraped off its editorial hull.

It seems to me, however, that these “events” are simply marketing ploys designed to make the reader buy as many tie-in books as necessary. They’re not born out of a need for anything but sales.

The problem (again, it seems to me) is there appears to be no plan for where they want to wind up. Even Crisis suffered from the fact that there was no clear concept of who the characters would be at the end and what the DCU would look like. 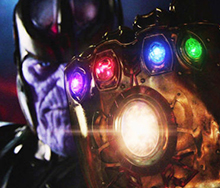 The Marvel Cinematic Universe has been doing a fine job of connecting the dots that are their movies and have had a real plan for where they were going and how each film fit into and furthered that plan. The DC Cinematic Universe… less so. They opted for dark and broody, broody, broody. Man of Steel, for any other faults it may have had, suffered from a Batmanization of its worldview.

Now Warners Bros (DC’s parent company) has announced that, in the future, not every film will fit together with the other films; in other words, like the DC Comics University of old. Some will fit together but not all and that seems to me to be a mistake. That invites confusion and there’s one thing that the general public will not appreciate is confusion.

The comics themselves, both DC and Marvel, also seem to be wrapped in confusion. It doesn’t help when the origin or the nature of the character is radically changed or the whole universe is re-stacked and changed. I think you run the serious risk of losing readers. You can erase things and redraw them so often that you turn it all to mud. You don’t grow the audience and, with the success of the superhero franchise films, you should be able to add readers. However, the event-driven books these days are not very accessible to new readers. Maybe there should be a line of a limited number of books that would be accessible and thus draw readers into the respective comic book universes. Even I, an old hand, am finding it hard to get into what’s going on. Constant change just becomes constant noise.

Find a good story. Tell it in as few issues as necessary. Otherwise, the reader starts to suspect you don’t have enough good stories to tell.