Saturday was 24-Hour Comic Day! Did you celebrate?

24 Hour Comics Day is an annual challenge for cartoonists to produce a 24-page comic book written, drawn, and completed in 24 consecutive hours. The event was founded in 2004 by Nat Gertler, prolific author and publisher of the About Comics company. Currently, the event is organized each year by the comic book specialty retailer trade organization ComicsPRO, and hosted by independent comic stores around the country.

The idea of the 24-hour comic comes from Scott McCloud, who originally came up with it as a creative exercise for himself and Steve Bissette. McCloud’s rules for the challenge were thus: The comic must be begun and completed within 24 consecutive hours. Only one person may be directly involved in its creation, and it must span 24 pages, or (if an infinite canvas format webcomic is being made) 100 panels. The creator may gather research materials and drawing tools beforehand, but cannot plan the comic’s plot ahead of time or put anything on paper (such as designs and character sketches) until he is ready for the 24 hours to begin. Any breaks (for food, sleep, or any other purpose) are counted as part of the 24 hours.

Numerous notable comic creators have attempted the challenge over the years.  Dave Sim published his 24-hour comics in the back of his popular book Cerebus the Aardvark. Neil Gaiman and Kevin Eastman tried and failed, and became the namesakes for the two varieties of “noble failures”: Gaiman stopped his comic at the 24-hour mark; Eastman continued to the full 24 pages. McCloud maintains a site for the challenge and also keeps an official list of recognized 24-hour comics. ComicsPRO reports that over 1,000 people have completed the challenge. Compilation books are available of the completed challenges for the past few years, and McCloud has a book on the subject as well.

While most participants are amateurs, many pro cartoonists take part as well. In addition to the most common black-ink-on-white-paper drawings, participants have done full color painted comics, computer-drawn comics, photo comics, comics made of pictures of posed action figures, a series of painted stones with captions, and a Daredevil superhero comic made by cutting pictures of Ben Affleck’s head out of magazines and pasting them onto stick figure bodies. The biggest single event was in Austin Books in Austin, Texas in 2005, with 70 cartoonists. 2006 saw event sites in 17 countries, and the reports for 2008 are still coming in. 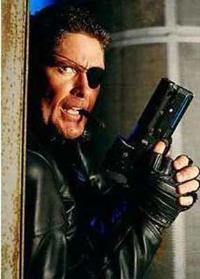 It should come as no surprise that Hollywood studios often turn to the pages of comic books and graphic novels for source material — especially for action-packed summer releases like Iron Man.

Some of these films, such as Iron Man, Batman Begins

, achieve a great deal of commerical and critical success. In addition, they’re also embraced by comic book fans as great examples of what comic book movies should be.

Unfortunately, there are also those other comics-to-film adaptations that disappoint critics, mainstream audiences and comic book fans alike. These films, whether due to bad writing, inept direction, gross miscasting, or a combination of factors, are often not only bad comic book adaptations, but bad movies in general.

Yet, even with Iron Man‘s phenomenal success, it’s important to remember these bad films. These particular movies occupy a special place in the hierarchy of bad filmmaking and deserve to be highlighted — especially so you can avoid seeing them if you haven’t already.

Here then, in no particular order, is the ComicMix Six list of the Worst Movies Adapted From Comic Books.