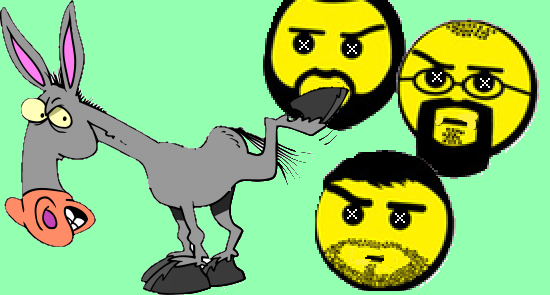 I freely admit that I am 33 years of age and have never been drunk, high, or anything more than over-tired. But over the last 33 days I’ve experienced inebriation in all its stereotypical stages – if only by proxy – as I managed what I can now declare as a successful crowdfunding campaign.

No, I didn’t drink any alcohol, smoke, toke, or shoot any whim-wham-wozzle into my ding-a-ling. I merely held my breath for 33 days as I watched 155 people trickle in to support Unshaven Comics as we embarked on collecting together our first independently published graphic novel. I’m somewhere between hugging the toilet and declaring how I love you all.

Managing a Kickstarter is an absolute pain in the ass. In creating the campaign, it took the better part of every hour in my life not otherwise devoted to my full-time job, to being a husband and father, and to managing a freelance graphic design business. From sourcing the absolutely wonderful partners who filmed and edited our video, to lining up vendors for producing our would-be graphic novel, to locating all other extraneous artisans and stores who would supply the other pledge prizes, it was an undertaking that easily could have been a full time job unto itself. After our network of vendors was in place, it then took hours of meetings between we Unshaven lads to concoct our pledge goal and build the pledge packages to entice would-be backers. And then we had it all spot-checked by a network of successful campaign builders in an effort to ensure we weren’t doing it all wrong. And all of that was merely the work that needed to be done before we could launch. Did I mention this whole thing was a pain in the ass?

The next bit of fun, err, living torture, occurred over the course of the actual campaign. Somedays, backers came in droves. Other days I was essentially pan-handling on the side of Facebook, dancing for nickels. All because of the latent fear that without a steady rise in backing pledges, new traffic would surf in, do the mental math, and walk away – confident that we didn’t have the juice to meet our goals in time. These mounting daily fears compounded with the deluge of offers bandied at me from the ecosystem of businesses now built around crowdfunding campaign management. Each new business enticing me with their promises of success via public relations, targeted ad sales, or (I assume) the sacrificing of a virgin goat by vengeful locals in Papa New Guinea. How could it not work?

I’m happy to admit that I gave in to a pair of services. One worked immensely well. The other was absolute abject failure. While some I know here on ComicMix like to grind bad businesses into the dirt, I will take the high road. In other words, if you want me to sling mud or sing praises, find me man-to-man and I’ll spill my guts. To cut to the chase: PR doesn’t do diddley-squat for the indie comic creator. In contrast, a solid and honest e-mail campaign works wonders.

If I were to spin my experience out into a panel (and I’m fairly certain I could lead a riveting one on the con circuit now), I’d sum it up simply: Like anything else in the world today, the hope to become viral is a silly pipe dream you can’t count on. The Samurnauts has an immortal kung-fu monkey who pilots a giant robot and BuzzFeed didn’t come knocking at my door. Instead, like every book we move at comics conventions around the nation, it is down to real legwork. It’s the culmination of the pitch and the product. If you can’t convince someone that your project is cool in 30 seconds, you won’t do it over the course of a five-minute video. And if you’re lucky enough to sell your idea, you have to bring it home with a product (or series of products packaged into enticing rewards) at a price point that your target audience feels is a solid value for the money. It’s a balancing act that has as little to do with virality as Rob Liefield has to proper anatomy.

At the end of 33 days, I am utterly exhausted, punch-drunk from the emotional roller coaster ride that was our Kickstarter campaign. I’m left in awe of the real friends who pledged, shared, and truly supported us with their encouragement. I’m left bitter by the posers who talked the talk, but failed to walk the walk – false friends willing to eat the bread but weren’t around when I needed help sowing the seeds. I’m honored to work beside my brothers from other mothers… who checked in with my daily to ensure we were doing everything we could to succeed. I’m flabbergasted at the outpouring of love and support from our fanbase – who not only shared the campaign over 800 times over 33 days, but offered their own rewards to new backers. I’m weary at the long journey ahead, as Unshaven Comics will travel to Atlanta, Cincinnati, New York, and Kokomo all within eight weeks as we attempt to finish production on the actual book itself.

There’s nothing left to say, save perhaps for the battle cry that got us this far.