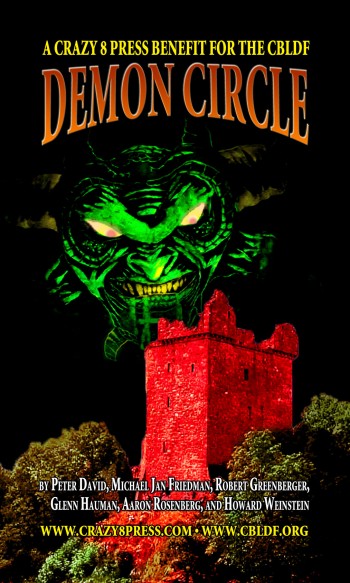 Athis, an apprentice wizard in the Crimson Keep, isn’t the brightest flame in the candelabra. So when he and another apprentice named Belid summon a demon and then panic, trouble ensues—trouble that threatens to snowball wildly out of control. Will they and their fellow student Klaria be able to deal with the consequences before their master finds out? Will the Crimson Keep still be standing when it’s all over?

You can get it for 99 cents, although you can choose to make a larger donation to the CBLDF by putting a different price below. After your purchase, you’ll receive an email telling you where to download the file.

Yeah, yeah, it ‘s a bit of shameless self-promotion but it’s for a good cause.

Hunt Valley, Maryland — They may not be wearing super-hero capes, but members of the new web-based writers’ group Crazy 8 Press will swoop in to help the Comic Book Legal Defense Fund (CBLDF) at the 33rd annual Shore Leave science fiction media convention the weekend of July 8-10, 2011.

Fans will have a chance to participate by contributing possible opening sentences, one of which will be randomly chosen as the story’s starting point. First-sentence candidates can be submitted in advance through the Crazy 8 Press Facebook (www.facebook.com/pages/Crazy-8-Press) page, as well as at the convention on Friday evening. The finished work will be sold as a low-cost e-book, on sale through Amazon, Barnesandnoble.com and other internet booksellers.

Profits from this story will benefit the Comic Book Legal Defense Fund, a non-profit organization fighting censorship and defending the First Amendment rights of comic book professionals. All of Crazy 8’s founding writers have worked in the comic book industry and David currently serves on the CBLDF board of directors.

Crazy 8 Press, which announced its formation in February, is a home for its established authors to sell original novels directly to readers through online book retailers. Together, Crazy 8’s founders have written hundreds of books and comics over the past 35 years, with combined sales of more than 15 million copies. The group has set a first-year goal of presenting at least one new novel-length title every other month.

The first new novel will be Peter David’s The Camelot Papers. Aaron Rosenberg’s novel No Small Bills will follow in September. Information on these and all future Crazy 8 Press projects can be found at www.crazy8press.com. All new stories (and some older, out of print works) by the Crazy 8 writers will be available for purchase through online booksellers including Amazon and Barnesandnoble.com.

Friedman described Crazy 8 Press as a natural response to upheavals in book publishing. “With publishers and retailers under pressure,” he said, “distribution channels are shrinking. We’re offering our readers a way to receive our work that’s not dependent on any third party.”

“Until now,” said David, “we’ve been at the mercy of book store buyers, who would tell publishers if what we wrote was suitable for their stores. Now that barrier is down. We’re coming to readers pure and unleashed, with stories they would never have seen in a traditional publishing environment.”

“Science fiction has always been a community where writers and readers enjoy a close relationship and exchange ideas,” Greenberger added. “The Crazy 8 platform allows us to make that relationship even closer and more interactive.”

In a case of the shoemaker’s children going barefoot, we didn’t mention anything beyond the teaser on Monday, but: ComicMix contributors Robert Greenberger, Glenn Hauman, and Aaron Rosenberg have joined with comic book writers Peter David, Michael Jan Friedman, and Howard Weinstein to form Crazy 8 Press, while we saw numerous writeups from The Beat, Bleeding Cool, and io9.

However, we can advance the story a bit further: a second preview of the first book, The Camelot Papers by Peter David, has been added to the Crazy 8 Press Facebook page. Just go there and like the page, and you’ll get access to Chapters 2 and 3. (Chapter 1 is still available on the Crazy 8 Press website.

The Camelot Papers will officially go on sale on July 8, both to tie in with the “8” and the Shore Leave convention in Hunt Valley, MD, where all six founders will be in attendance– and doing a special comic related project together which we’ll tell you about when the time comes.

Now What Is Peter David Up To? 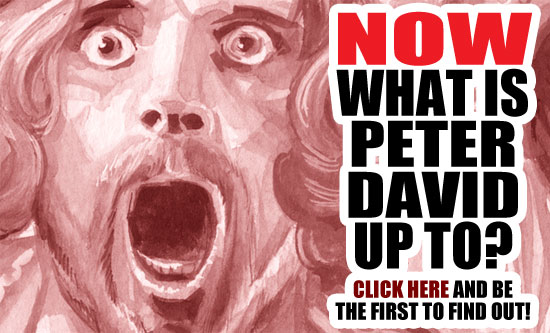 It’s official–  Peter David has gone crazy. Go take a look for yourself.