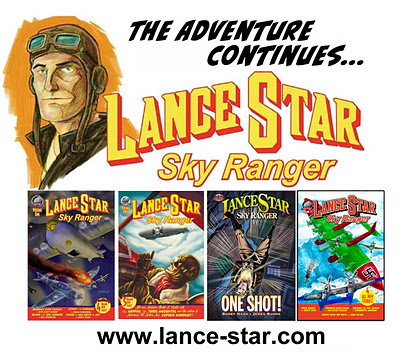 Airship 27 Productions’ Black Bat Mystery Vol. One is now on SALE for $9.67 at Amazon.com, a whopping 61% off the cover price. “You are not going to find this book for a better price and just in time for Christmas,” says Airship 27 head honcho Ron Fortier. “Would make the perfect gift for the pulp fan in your life.”
For more information on Black Bat Mystery Vol. One, visit http://www.amazon.com/Black-Bat-Mystery-Andrew-Salmon/dp/1934935719/ref=sr_1_1?s=books&ie=UTF8&qid=1320246151&sr=1-1 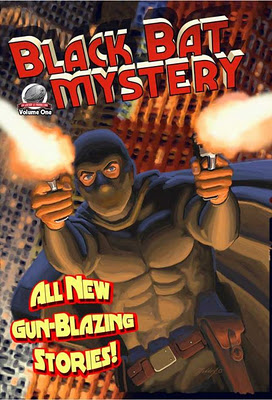 About Lance Star: Sky Ranger “One Shot!”
November, 1941. Ace Air Adventurer Lance Star accepts a dangerous mission into an enemy stronghold to stop the Nazi’s from uncovering plans for a weapon long believed destroyed. Lance flies a solo mission to Kiev where he is to plant explosives and destroy a weapons facility when he runs into an old enemy. Now, Lance is faced with a choice. Complete the mission? Or take down the Sky Ranger’s greatest adversary? He’s only going to get one shot at this. Will he choose the mission or revenge?

BEN Books has released an ad featuring their first two offerings. A black and white version of this ad will appear in the back of the upcoming Deadly Games! novel by Bobby Nash. The BEN Books website – http://ben-books.blogspot.com/ – is now live. 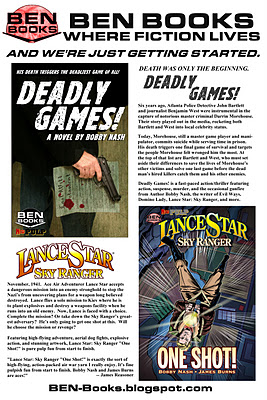 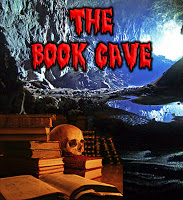 You can listen to episode 148 of the Book Cave at http://thebookcave.libsyn.com/.

RETURN OF THE MYSTERY MEN

Airship 27 Productions and Cornerstone Book Publishers are thrilled to announce the release of the new MYSTERY MEN (& Women) Vol II.

In 2010, after five years of bring pulp fans the best new adventures of classic pulp characters, Airship 27 Productions launched this particular title to allow their talented creators to have fun inventing brand new pulp heroes. In Volume One we introduced pulp fans to four original characters, two of whom were female avengers.  Now we proudly present the second installment and another brand new quartet of fresh and exciting heroes cast in the mold of the classic adventurers of the past.

RED BADGE –Operating on the streets of New York, he is a mysterious vigilante daring to confront the mobs and protect the innocent.  But who is he really?  The cop, the famous radio announcer, the brother to a victimized young woman?  Created by Mark Halegua with writing partner Andrew Salmon.

JACK MINCH, ACE REPORTER –Writer, editor, Jack Minch thought he knew New York City like the back of his hand until one of his star reporters suddenly vanishes within the deep, maze like sewer tunnels beneath the concrete Gotham. Now Minch and a detective ally must travel into this unknown domain where death lurks at every turn.  Created by Greg Bastianelli.

DOCK DOYLE – Dock Doyle was a movie matinee hero of the cliffhanger serials known around the world.  But when things go horribly awry on location of his latest jungle adventure, the actor must come to grips with becoming a true hero, or dying in the process.  Created by Adam Garcia.

A MAN CALLED MONGREL – In today’s world of high tech communications, private companies wield power like governments, some for the public good, and others for their own evil agendas.  Now a modern day warrior will champion his family’s technological empire and defend it against all who would destroy them.  His name is Mongrel. Created by Derrick Ferguson.

Ron Fortier & Rob Davis of Airship 27 Production are happy to announce all three volumes of their pulp aviation series, LANCE STAR: SKY RANGER are now available for sale as Print-on-Demand books from (http://www.indyplanet.com/) for the price of $15 each plus shipping handling.

“Eventually all our books will be available at Indy Planet,” Fortier announced recently. “We’ve thirty-nine titles in our catalog and it will take a few more months before all are available there.”

“Readers should log on to the main menu page at Indy Planet and type in the book’s title in the upper right hand search slot,” Fortier continued. “We are thrilled with partnering with Indy Planet and the quality of their product is as good, if not better, then all other POD outfits on the market today.”

If you’ve been at all interested in picking up the entire Sky Ranger saga, you can get all three volumes and the comic book adventure for just $48. Now that’s a steal on any planet.

Next up is Lance Star: Sky Ranger writer, Bobby Nash.

Next up is Lance Star: Sky Ranger artist, Shannon Hall.