Bob Ingersoll: The Law Is A Ass #352: BATWOMAN: ADVICE ON CONSENT

Nocturna did not rape Batwoman.

The debate’s been going on for months now – ever since Batwoman v2 #34. Did Nocturna, the vampire super villain in the Bat books, and use her vampire hypnosis powers to rape Batwoman. I say no. But it’s not as simple as that.

That night, Batwoman – well, Kate Kane but I’m going to call her Batwoman – was going to bed when a shadowy figure appeared in her bedroom and this happened: 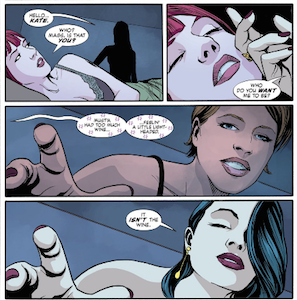 Panel One: Batwoman saw a figure in the shadows and asked, “Maggs, is that you?”

(For the record, Batwoman is a lesbian. Maggs is Maggie Sawyer, Kate’s ex-fiancée, with whom she broke up earlier the same issue.)

Panel Two: The figure caressed Batwoman’s cheek and said, “Who do you want me to be?”

Panel Three: Batwoman – her speech suddenly slurred with strange purple star-like squiggles in her word balloons – said, “Must’a had too much wine… Feelin’ a little light-headed.” Batwoman was clearly under the influence of something. This panel was from Batwoman’s POV and showed clearly Maggie reaching for her.

Panel Four: From the exact same POV the figure, now clearly Nocturna and not Maggie, reached toward Batwoman in exactly the same position as “Maggie” had been in the panel before and said “It isn’t the wine.”

Next Page: Nocturna bit Batwoman on the neck and said “And I’m not Maggie.”

Reaction to the story was strong. Many people said that Nocturna used her powers to make Batwoman believe she was Maggie Sawyer to trick Batwoman into having sex with her. These critics say that by doing this Nocturna raped Batwoman.

It’s not that simple.

Marc Andreyko, the writer of the story, responded in some Tweets that the story wasn’t just the usual “mindless slave trope,” and that no one had forced Batwoman to do anything. He asked the readers to hold off judgment until they had seen the entire story.

It’s not that simple, either.

The story didn’t actually show Batwoman and Nocturna having sex. However no one, including Mr. Andreyko, has ever disputed the interpretation that they had sex. Andreyko merely said that Batwoman wasn’t forced. So I think we can safely conclude both from the context of the story and the absence of any denial, that Nocturna and Batwoman did have sex.

Mr. Andreyko asked us to forbear passing judgment on the story until we saw the end. That end came several issues later. So for several more issues, we followed Batwoman and Nocturna through their sexual relationship. It was one where Nocturna was the dominant figure. Batwoman, in fact, seemed to be little more than manipulated and subservient. We finally got to the end of the story in Batwoman v2 #39.

Batwoman: “You don’t… love me?” Nocturna: “I don’t even like you. You were just so easy to ensnare.” Batwoman: “You used your powers to make me sleep with you?” Nocturna: “I bet you wish that were true. No, Batwoman that was all you. “I’m no rapist. You wanted me so I figured, ‘I haven’t done this college so why not?’ … Hypnosis can’t make you do anything you don’t really want to do… All I did was find an open door in your head. All the interior decorating in that room? Yours.”

So now I’ve seen the end of the story. I need forbear no longer. Here’s what I think.

I think Nocturna was controlling Batwoman’s mind. According to DC Comics’ own on-line database, the victims of Nocturna’s hypnosis act are controlled by her as if possessed. Nocturna admitted that she used her powers to “ensnare” Batwoman. The question is, by “ensnar[ing]” Batwoman, did Nocturna rape her? To answer that, we must examine exactly what Nocturna did.

Nocturna came to Batwoman’s room and used her abilities to make Batwoman believe she was Batwoman’s ex-fiancée, Maggie Sawyer. If Nocturna did that to make Batwoman have sex with her, the answer seems clear. That online DC database I mentioned earlier actually has a page called “sexual assault” that talks about this kind of act. For example, “Nightwing has been raped on multiple occasions. Mirage posed as his girlfriend Starfire to deceive him into having sex with her.”

If Nocturna used her abilities to make Batwoman think she was Maggie Sawyer to trick Batwoman into having sex with her, well even the DC Comics database calls that rape. The problem is, the story’s a little ambiguous and I don’t think that’s what Nocturna did.

When Nocturna came into Batwoman’s room, Batwoman was clearly under the influence of something. Batwoman blamed some wine. Doubtful. Her speech went from perfectly fine in Panel One to slurred in Panel Three. “Too much wine” doesn’t happen that fast. It’s more likely the influencing agent was Nocturna’s powers. That it was Nocturna’s influence not the wine’s is even more likely as Panel Three shows Batwoman’s POV of Maggie Sawyer reaching down to her. Wine wouldn’t make Batwoman see Maggie. Nocturna’s hypnosis could. However, the story also clearly shows Nocturna had stopped looking like Maggie before she bit Batwoman and before they had sex.

I think what happened is Nocturna made Batwoman think she was Maggie, so she could get close enough to Batwoman to bite her. Then she used her hypnosis to “ensnare” Batwoman and lower Batwoman’s inhibitions so Batwoman would have sex with her.

Nocturna said she didn’t rape Batwoman, because she couldn’t make Batwoman do something that Batwoman didn’t really want to do. So she didn’t use her powers to “make” Batwoman sleep with her. As Batwoman wasn’t forced to do anything, it wasn’t rape.

The fallacy with this argument is that rape doesn’t have to be by force. Remember that DC Comics database page on sexual assault? It talks about another character, Windfall, who was drugged at a frat party and raped. In that instance, force wasn’t used, but Windfall’s ability to refuse was compromised by the drug. It also talks about how Damien Wayne was the product of Batman being raped by Talia after being drugged.

Section 2C:14-2 of the New Jersey statutes says it’s a felony of the first degree if a person has sexual penetration – trust me, the definition of sexual penetration in NJS 2C:14-1 includes the types of sexual acts that occur between lesbians – when “The victim is one whom the actor knew… was … mentally incapacitated, or had a mental … defect which rendered the victim temporarily or permanently incapable of understanding the nature of his conduct, including, but not limited to, being incapable of providing consent.” The statute clearly applies to Windfall or Batman being drugged so that they could not give consent. Does it also apply to what Nocturna did?

Let’s look at a hypothetical. A married woman is attracted to one of her neighbors and wants to have sex with him. But, she doesn’t. It would betray her husband. It would violate her wedding vows. Then the neighbor roofies her and lowers her inhibitions, so that she gives in to the desires she had successfully suppressed and has sex with him. That act would fall squarely under the New Jersey statute, because the neighbor knew the woman was temporarily incapacitated by drugs and incapable of giving meaningful consent.

Batwoman’s situation is no different. Even if she was attracted to Nocturna and deep down might have wanted to have sex with Nocturna, the reason she did have sex was because Nocturna’s hypnosis nudged her into agreeing. Batwoman was under the influence of a roofie-like hypnosis which affected her ability to give Nocturna any meaningful consent.

But she didn’t rape Batwoman.

But, other than that – a difference in nomenclature – she totally raped Batwoman.