Martha Thomases: Wonder Women and the Men Who Don’t Get Them 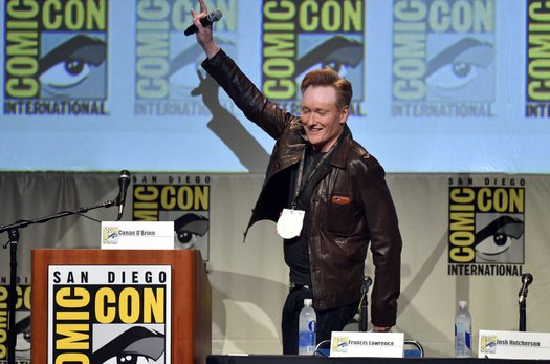 I wasn’t at the San Diego Comic Con last week, but I kind of feel like I was. I watched Conan O’Brien every day. I read updates on line. I watched movie trailers from panels I probably couldn’t have got into. It was just like being there, except I didn’t have to wear underwear, I could knit, and I had a cat on my lap.

Still, I missed seeing my friends, and people who aren’t exactly my friends, but we know each other well enough for them to hug me.

And I missed seeing a comic culture that, finally, accepted women as true fans. Instead of raging about Twilight fans (which is my last memory of SDCC), or bitching about cosplayers, the reports I read from SDCC 2015 were remarkably cheerful and inclusive and accepting. Crowded, and with long lines for the bathrooms, but full of good will.

And then I read this. Two veteran Hollywood reporters lamenting the “fact” that movies today are all about women heroes, and that the “real” men can’t catch a break. Never mind that nothing they say is even remotely factual.

Look, I get it. They’re old, and the movies they grew up with are no longer fashionable. In some ways, I share their feelings. I love John Ford westerns. I adore the free-wheeling movies from the 1960s and 1970s, before movies cost so much that the marketing departments took over the studios. But my nostalgia for my lost youth doesn’t blind me to the fact that those movies, for all their brilliance, for all their art, ignored the existence of most of their potential audience, and denied the experiences of people who weren’t white and straight and conventionally beautiful.

At the same time, the United States women’s soccer team won the World Cup and Serena Williams conquered Wimbledon. Now, I generally couldn’t care less about sports, but even a curmudgeon like me was excited to see talented, motivated women win.

In parallel to the ridiculous old men who wrote the piece in Deadline linked above, there were men who used the occasion to bewail Selena Williams lack of “femininity.” These ranged from the Newspaper of Record to the ungovernable Twitterverse.

To me, Serena Williams looks the way Wonder Woman is supposed to look. She’s a big girl, with solid muscles because she needs her strength. She dresses for competition the way I imagine a super heroine would dress, in clothes that allow her a full range of movement and provide support where she needs it.

Serena Williams is not the only woman with a body that’s heroic. There are body-builders and gymnasts and runners and swimmers and soccer players, too. There isn’t just one kind of strong body for women, just as there is no one kind of strong body for men. None of them look like the tits-and-ass fantasies of too many artists, but I think that style of art is losing popularity.

In times of change (by which I mean, forever), some people will always get upset. They will be threatened by the change and worry that they will lose something, whether that something is power or privilege or just stories that they like.

(I’m like that, sometimes. Move a favorite television show to a different time-slot, and my world falls apart. Even knowing how to use the DVR doesn’t make me feel any better.)

People who are not powerful know there are no guarantees in this world, that there is no stability, no permanent comfort. It’s those who are complacent in their wealth and power and privilege who are surprised. At best, if we find ourselves uncomfortable in these positions, we can hope to have empathy. At worst, we can dig in and be jerks.

(Last week, I was kind of a jerk. I’m sorry about it, and I appreciate those who cared enough to educate me.)

Relax, uptight men. Most movies still focus on heroes who are white and male and straight. So do most comics. No one makes you pay for any stories about women or people of color or queer folks.

But some of us want those stories. We’re going to tell them and watch them and read them.

Make no mistake – the box says Batman 3, but this is clearly the DC response to the Marvel Lego Super Heroes game from last year.  With over 150 heroes and villains, an oncoming storm of DLC, and a sweeping plotline, this is the biggest look at the Lego DC Universe yet.

The title says “Beyond Gotham” and they follow up straight away – the opening video features the six Lantern Corps that aren’t green. Sinestro, Star Sapphire, Saint Walker and Larfleeze start off bickering but are quickly defeated and put under the thrall of the game’s Big Bad, Brainiac.  In only the opening levels of the game the narrative moves from an underground battle against Killer Croc to a outer space where Batman and Robin team up with fellow Justice Leaguers Flash, Cyborg and the Martian Manhunter.

All the Lego games bear some common concepts – the characters fight and puzzle their way through various levels based on the narrative of the story the game is based on, a list so far including Star Wars, Harry Potter, The Lord of the Rings and Pirates of the Caribbean.   Everything is awesome destructible, the debris revealing “studs”, the common coin of the Lego realm, which can be used in between levels to purchase new playable characters.  Various characters have different powers – some can fly, some can shoot fire – and each power will allow the player access to different parts of the levels.  Since many characters and powers are not available at the start of the game, the replay value of the series is impressive, nearly exhausting for those insist on chasing the virtual dragon that is the elusive 100% completion rating.

One of the joys of each successive Lego game is to see what new gameplay is created, and what features are pulled from previous entries in the various series.  The interchangeable specialty suits make a welcome return from previous Bat-games, not only for Batman and Robin, but other heroes like Cyborg.  The score multiplier from the Marvel game has been added, and quite useful; too – the number of studs needed to fill the “True Hero” bar on most levels are painstakingly high.  Where Marvel had Stan Lee hidden amongst the levels for you to save, Batman 3 fills that role with the finest Bat-Actor to ever draw breath, Adam West.  Flying characters hake an appearance, including the first large-size mini-figs like the giant true form of the Martian Manhunter and Arkillo of the Yellow Lantern Corps.

The breadth and depth of characters in the game is truly staggering.  From the A-list JLA members to the mid-carders like Blue Beetle and Booster Gold, even villains for the other heroes to fight, like The Cheetah and the Rainbow Raider.  Guest stars from past the fourth wall are a new addition – DC creators Geoff Johns and Jim Lee get the mini-fig treatment, as do Conan O’Brien and Kevin Smith.  In addition to his cameos as a hapless actor in distress, Adam West also voices the Batman from the classic 1966 TV series (now out on DVD) in a special level, complete with retro Batcave and minifig design, and the comic-booky sound effects that have so inextricably affixed themselves to any news media coverage of comics.

But they don’t stop there. This game ties into Batman’s 75th anniversary, and as such pulls in characters and suits from many media.  In addition to the Batman suits from the movies, Batman Beyond is featured in the game, along with his villains like Inque.  Batman The Animated Series gets a tp of the hat with The Gray Ghost, and of all people, Condiment King, and Brave and the Bold brings us the Music Meister.

In a first, the cast of the WB’s hit series Arrow appear in the game, with voice provided by Stephen Amell.  Felicity Smoak, Malcolm Merlyn and the Huntress will be making an appearance in a DLC pack.  But if I had to choose the single most WTF-y included character, it’d have to be The Green Loontern, AKA Daffy Duck, AKA Duck Dodgers from the episode of the TV series where Dodgers accidentally got Hal Jordan’s laundry by mistake.  THAT’S what I call obscure.

In addition to the common design and base gameplay, surely the most beloved common feature of the Lego games is their wacky sense of humor, and this game does not disappoint.  In addition to the wonderful and fun plot and dialogue, be on the lookout for endless throwaway gags in the background.  As Hawkman (or is he?) enters the Hall of Justice, he passes various souvenir stands dedicated to the heroes, including an Aquaman booth choked
with unsold merchandise.  Or as Princess Diana takes to the air, the classic Wonder Woman TV show theme starts to play.

It is not unreasonable to say that there are those who are playing each and every Lego game because of their love of the series, over and above the licensed property that the latest game based itself on.  This game will satisfy both Bat-Fans and Legomaniacs alike.

Lego Batman 3: Beyond Gotham is available for all current Xbox, Playstation and Nintendo platforms and handhelds.