Plenty to look forward to for people headed to San Diego for Comic Con International 2008, at least as long as you already have tickets.

According to the CCI Web site, single-day passes for both Friday and Saturday are sold out, as are four-day passes.

Sounds like more proof positive of the idea brought up by Laura Hudson in this Publishers Weekly story, that Comic Con has possibly grown too large for its own good.

Even publishers aren’t sure if they’ll make it inside:

Exhibitors are also feeling the pinch as they compete for limited space on the convention floor. At the recommendation of fire marshals, aisles in the giant halls D and E were widened, meaning there’s even less available acreage overall. As a result, many professionals and publishers, including book publishing giant HarperCollins, are still on a waiting list for a booth only weeks before the show opens—and unlikely to come off of it.

There’s a lot of Watchmen news hitting the ‘Net these days, as we chase the shot of fake "Veidt Enterprises" commercials we posted earlier with some San Diego Comic-Con International rumors related to the big-screen adaptation of the groundbreaking graphic novel.

According to Cinematical (I haven’t had a chance to watch the videos myself, so I’m taking their word for it), the videos indicate that there’s a high probability of seeing the first clips from Watchmen prior to screenings of The Dark Knight next month. There should also be some extra footage shown during Comic-Con later that month, too. Additionally, Snyder hinted that Nite Owl’s flying ship might make an appearance during Comic-Con.

Be sure to check out the Cliff’s Notes version of the Snyder video over on Cinematical for a few more items of note, and when you have the time (there’s around 10 minutes of video to watch), view the full interview over at Collider.

How Do You Give a Comics Reading? 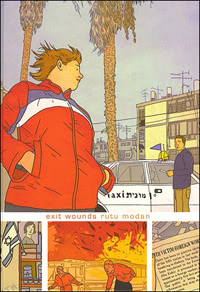 As graphic novels and comic books become more entrenched in the high-minded literature scene, comics creators likely will begin entering into the world of the author.

That could mean holding book signings at Barnes & Noble as well as Comic Con. It could mean facing the scrutiny of self-important book critics as well as snarky Internet fanboys. In the case of Exit Wounds creator Rutu Modan, it meant holding a reading.

For literature, readings are easy enough. You step in front of an audience, crack open your book and read. But because comics are so image intensive, a reading becomes much more difficult.

I’ll never forget hearing John Ridley on NPR discussing his comic series The American Way, and how awkward it was when he tried to not only read the dialogue and captions but also describe everything. Luckily, I’d already read the book and could follow along.

Speaking at Jewish Book Week, Modan tried another tack by showing a projection of the pages as she read. However, even that wasn’t ideal. Here’s how the Guardian writer described it:

Modan’s presence raised the interesting technical question of how to conduct a reading of a graphic novel. The answer was via a PowerPoint presentation and a lot of advice from a tech-savvy audience shouting: "Now go to ‘Slide Show’, now click ‘View Show’."

Earlier in the week I told you that a brand new trailer for Iron Man would premiere during ABC’s Lost this week. In case you missed it or, for some reason don’t happen to watch Lost, here you go:

This latest trailer provided a first look at many elements of Iron Man, including Gwyneth Paltrow as Pepper Potts, much more of Robert Downey, Jr. as Tony Stark and some new armor test sequences as Stark is trying out his jet boots and learning to fly.

The news feeds are buzzing today with countless horror stories about creators, media and exhibitors trying to find lodging for this year’s Comic-Con International. Apparently, the only way you’re going to get a room near the convention center this year is to shack up with a lonely furry. Seriously.

Over at The Beat, Heidi MacDonald weaves a tapestry of epic victories and crushing defeats in the quest for San Diego room reservations:

Just like when you’re hunting for an apartment in New York City, at moments like these you have to make a snap judgement. There’s no “think about it”. There is only “do”. We hit our sentimental favorite hotel, The Horton Grand, which is sort of out of date and yes, the staff is cranky, but, hell the toilets have pull chains. Old skool. We hit it again. Rooms available. Name, address, credit card…we kept forgetting to check the boxes to approve everything, so had a nerve wracking wait. A bad feeling crept over us. The blue bar moved so slowwwwwly. Would THIS be the year? Could this be the disaster we’ve avoided for so long?

She also checks in with a few big-name creators about their search for rooms, and examines some questionable factoids being thrown around by San Diego’s local officials. Yes, it seems that Comic-Con isn’t nearly as much of a boon for the local economy as a convention for "geographic information system software."

The ‘Net is buzzing this week over the potential implications of the writers’ strike on this year’s Comic-Con in San Diego. Sure, there’s a lot of chatter about the effect the strike will have on Hollywood’s participation in the event,with some arguing that less Hollywood means more comics, and that more comics means… well, more comics. Over at The Beat, however, Heidi MacDonald assesses whether there are any answers  to the big questions, then takes a look at some of the other, equally important questions on the peripheral of the discussion.

"At this point it’s quite likely — but depressing — that the writer’s strike will last at least as long as the last one — six months. Networks are filling the space with reality programming, so we could just see more stars of Beauty and the Geek and How Clean is Your House on parade at Comic-Con (These shows have the strongest tie to the core demographic, in our opinion.) There are a number of movies in production that will still need to be flogged, as well, WATCHMEN for one,

So our prognosis? If the strike doesn’t end soon San Diego may be a little less manic, but not a whole lot less.

But that’s not even the really IMPORTANT question:

What does this mean for your chances of getting a hotel room?"

All This Stuff Happened…

Greg Rucka has some post-Comic-Con thoughts, mostly about how crowded it was. How about this: next year, just rope off the whole city of San Diego, and use the streets for aisles. Brilliant, right!

The amazing, never-before seen reunion of the seven Image founders at Comic-Con is, like everything else in the world, now up on YouTube.

The Beat reports on the Scribe awards – for the downtrodden refuseniks of literature, the media tie-in writers – which were awarded for the first time at Comic-Con this year.

Chris’s Invincible Super-Blog has found the greatest movie title ever: Yo-Yo Girl Cop. Not only is it about a female cop who wields a battle yo-yo, it’s actually the sequel to something.

Greg Burgas of Comics Should Be Good finally files his San Diego report.

Jog of The Savage Critics brings the love for one of my favorite comics of all time, the first series of Pat Mills and Kevin O’Neill’s Marshal Law.

If you ever wondered where Stepford Wives come from…Alma Alexander discovered the website of a photo retoucher who fixes up kids’ pageant photos – such as this example of turning a perfectly cute baby into a creepy doll-like object.

END_OF_DOCUMENT_TOKEN_TO_BE_REPLACED

Adventures in SciFi Publishing has some Comic-Con pictures.

Fantasy Book Critic has a wrap-up of Comic-Con, with some pictures and thoughts, and yet more links.

The Bat Segundo show flutters back for a second podcast about this year’s Alternative Press Expo.

Ned Beauman is now blogging about comics for the Guardian, but he thinks it’s hard out there for a non-misogynist.

END_OF_DOCUMENT_TOKEN_TO_BE_REPLACED

Spanning the Globe with Comics

Even if you’re not at Comic-Con, you can see it via the official flickr set.

Chris’s Invincible Super-Blog has some fun with a 1969 Batgirl story.

END_OF_DOCUMENT_TOKEN_TO_BE_REPLACED

The International Association of Media Tie-In Writers has announced the nominees for the first annual Scribe Awards, honoring excellence in licensed tie-in writing for books published in 2006. The 2007 Scribe awards will be given out at a ceremony at Comic-Con in San Diego.

Their first annual Grandmaster Award, honoring career achievement in the field, will go to Donald Bain, author of the Murder, She Wrote novels and the ghostwriter behind Coffee, Tea or Me and other bestsellers.