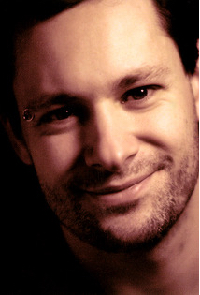 For some of us, the 1990s was a certain kind of Golden Age of Comics. The success of Image Comics meant that creators were given a lot of freedom to do what they liked, with deep-pocketed corporations competing to see who could throw the most money at the talent. It was in this environment that DC launched the Vertigo imprint, and eventually set up a satellite office in London.

Art Young was in charge, fresh from a brief stint at Touchmark, Disney’s pre-Marvel attempt at the Direct Market. The only other person on staff was Tim Pilcher. Together, they published a slew of books (including most of the books originally commissioned for Touchmark) and generally made comics seem even cooler.

I only met Tim Pilcher a few times, although we talked on the phone fairly often. He always struck me as a delight, quick and funny and smart – although it should be noted that, like many, I am a sucker for anyone with an English accent.

Now he has a new book, Comic Book Babylon, not to be confused with this Comic Book Babylon by ComicMix pal Clifford Meth. Tim’s version is an account of his time in the Vertigo UK office, about the drugs and the sex and the blatant disregard for any sort of corporate decorum.

God, I wish I had been there.

MT: What titles did you work on? Were there any Vertigo UK titles you did not work on?

TP: Officially (meaning credited in the books) I worked on Face, Tainted, Shadow’s Fall, The Mystery Play, Rogan Gosh, Kill Your Boyfriend, and The Extremist. Unofficially, the first books I started working on were #4 of Enigma and #3 of Sebastian O. I was also working on Egypt, Flex Mentallo, The Eaters, Millennium Fever, and Tattered Banners towards the end of my tenure, but didn’t get credited in any of those. Other Vertigo UK titles I didn’t work on were the Tank Girl miniseries and film adaptation (which were pretty poor), and Mercy (as that was already completed by the time I’d started). 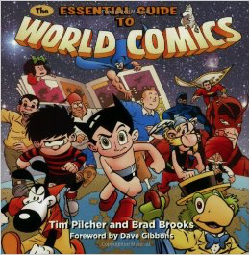 MT: Ever since I saw The Monkees as a kid I assume that all rock bands share a house, and from there, I imagine all kinds of groups share houses. There was a point when I was at UKCAC one year when I realized that I subconsciously thought all British comic book creators shared a house. While that isn’t true (not even for The Monkees), you did share a flat with a few. What is that like?

TP: Well, actually, at the time, many of us were mostly fans creating stuff for fanzines and writing and drawing for free. When I look back on it, it was a fun time and funny how I took all that creativity for granted. I lived with Fiona Jerome, who was a respected comics journalist and writer who went to John Brown Publishing and revolutionized their magazine publishing. There was Martin Hand, a very well regarded small press creator and Howard Stangroom (nee Will Morgan) who wrote lots of strips for Meatmen Comix. Plus, the house owner, James Wallis, who wrote for various comics magazines and eventually became a games designer. But there were little groups like this all over the UK. I used to go and visit the “Worthing crowd” who all came out of Northbrook College including Philip Bond, Jamie Hewlett, Glyn Dillon, and Alan Martin. They all used to share houses and hang out together, so it was quite common. The British comics scene is pretty small and incestuous!

MT: Did you resent having to go to a day job when they got to stay home?

TP: Not at all! I got to work in Soho, the coolest part of London at the time, and we had various creators and people popping by the office all the time. Plus, there was a free bar on our floor and private advance film screenings in the Warner Bros. building at least once a week!

MT: Can you describe your first week at Vertigo UK? What was most different from your other jobs? 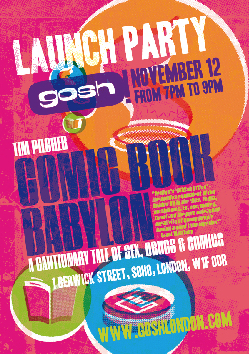 TP: It was the first proper office job I’d had. Prior to that I’d spent almost six years working in retail, so not having to deal with the public and just me and Art in an office was a big change! I was very nervous and mindful of not screwing anything up! I probably put in far more extra hours than I needed to, as I was enthusiastic and really wanted to learn. In those days everything was much slower as we didn’t have computers (initially) so all our business was conducted by fax, phone and Fed Ex. It feels really archaic now, as I work with digital files being transferred all over the world and talk to my colleagues in Paris and L.A. on Skype on an almost daily basis. Technology has definitely made comics publishing much easier (in certain respects).

MT: Can you describe your last week at Vertigo UK?

TP: It was very bleak. In many ways it was like the emotional hangover of someone who’d been raving on ecstasy for three days straight and now had hit the mid-week depression blues. All the dopamine of the job had been used up. The fun had gone completely and things were very tense. I’d learned some very important, and hard, lessons. I think in many ways those hedonistic days of the Vertigo UK office have actually switched me around from a crazed party animal to an obsessive workaholic! Hopefully, one day, I’ll find the correct work/life balance!

MT: My tenure at DC overlapped yours, and our office was run much differently. For example, expense accounts were monitored so closely that we were not allowed to tip more than fifteen percent. Do you know if anyone in accounting was ever asked to verify your expenses?

TP: I think one of the major factors for Art wanting to set-up shop in London was exactly to get away from that micro-management. Karen Berger trusted him enough to run the London office, and as far as I was aware he had a pretty much carte blanche expense account (at least initially). I think as the spending went up, and the titles’ sales didn’t match that, questions in NYC were started to be asked. But really, it was impossible for DC’s accounts to prove how much an average taxi or a meal would cost in London, so they had to take our word for it.

MT: What was the most outlandish thing you ever expensed? 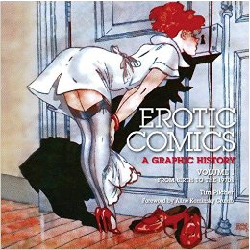 TP: I was actually very wary of pushing things because I didn’t want to kill the golden goose. In the book I talk about when Art took myself and our intern, Helen, out for my birthday to a fancy restaurant and spent the equivalent of around £450/$650 in today’s money on the meal and champagne, which was charged back to the company. So, thanks for that, DC!

MT: Have you seen the movie, The Devil Wears Prada? (Or read the book, although I haven’t done that.) Was Art Young like that?

TP: Actually, that’s a pretty good analogy, it was a little like that. Art was a tad flamboyant at times! I actually used Toby Young’s How to Lose Friends and Alienate People as my template in approaching the story: Eager, keen guy gets job of a lifetime and screws it up! To be fair to Art, he was a brilliant mentor, and I owe him a huge debt of gratitude for training me up and explain how the business works, and I’ll be eternally grateful for that…and all the free drugs.

MT: Finally, I asked Tim to tell me what people said about me, although I said I probably wouldn’t print that. Suffice it to say that he assured me that everyone thought I was the most beautiful woman in Puppetland, but he added this:

I can’t recall anyone being bitchy about anyone at DC at that time! You, Bob, Patty, Karen, et al were thought of as good guys. ;-) Sadly, it’s no longer the company we used to know! I don’t think there’s a single person left there working from our days! Nearly all the women have gone! All looks pretty bleak to me and sadly the company I grew up reading, loving and working for, no longer exists. Had lunch with Dave Gibbons the other day and he feels the same way!

Tell people that if they want copies of the book they can contact me on Twitter: @Tim_Pilcher