Last week I picked up a copy of Motor Crush #1, the new Image comic with all the buzz, created by the team that brought us the Batgirl of Burnside, including Brenden Fletcher, Babs Tarr, and Cameron Stewart. Part of what motivated me to pick up this comic was the report at Bleeding Cool that some retailers admitted that they did not order Motor Crush for their stores because they didn’t think their customers would buy a new comic with a black female lead.

I got around to reading this comic a few hours after picking it up, and it really was a good, fun time. We follow the sci-fi adventures of racer Domino Swift as she fights biker gangs and the world around her of both legitimate and illegal racing is fleshed out before us. Other than perhaps getting a little lost reading one or two of the action sequences, it was a smooth and enjoyable read.

There is one thing about the book that stands out to me though.

No one attached to the book is black. The entire creative team and the editor, Jeanine Schaefer, are white. The letterer, Aditya Bidikar, is Indian which is important as we don’t have enough Indian voices in Western comics. This does, however, leave the book without a single black voice attached.

It can be for a few reasons, one of which is related to how comics compares to other media. In prose, you’re often dealing with an author and an editor so you have little room to add more voices. When it comes to television and film, you have much larger groups of people working on them and the characters are played by real people. Maybe the creators are all white, but if the characters are black, they’re played by real people who can be admired and idolized who can benefit from that in their careers and inspire other people to be actors. In comics, particularly mainstream American comics, you can easily end up with teams of  between four and a half dozen or more working on a single story. If a team that isn’t black is making a comic with a black protagonist you have a situation where only non-black creators are making financial and professional gains from a book while many black and other marginalized creators aren’t getting the same levels of press and encouragement.

Is that what we want? It’s worth pondering.

Also worth considering: this team in particular is the same team that was involved in the horrifyingly transphobic and misguided Batgirl #37. That issue is so infamous to me I didn’t even have to look up the issue number; I just know it. The team created a terrible villain using dated trans tropes that disgusted me to the point where I didn’t read anymore of that Batgirl run until issue #45 to read Alysia’ Yeohs wedding – and that wasn’t enough to bring me back in. The damage was done.

The team apologized for the events of issue #37 and the collected edition was edited to remove some of the most damning content. Do I believe we have to chase every creative team out of comics who make big mistakes like this? Absolutely not. However, that doesn’t mean I’m going to trust that creative team with handling certain characters outside of their own experiences. Sometimes it’s important to have a team with people from a community you want to do a comic about to avoid a Batgirl #37 situation.

To a lesser extent, but with more consistency, we saw this happen with Iceman in different X-Men comics the last couple of years. I’ve been critical of how Iceman has been handled by Bendis as well as Lemire and Hopeless. Now Marvel is moving in a new direction with Sina Grace, a queer man, at the helm on the new Iceman solo series. Though the series isn’t out yet, I’m familiar with Sina’s other comics works and this seems like a step in the right direction.

There are also examples of comics that do have representation on the teams that have been wildly successful. Another title at Image, Bitch Planet, has been a big hit. Though Kelly Sue DeConnick is mostly writing women of color, her co-creator is Valentine De Landro, a black creator whom I’ve been a big fan of since his tenure on Peter David’s X-Factor, and the two of them together pulling from their own knowledge and experiences have crafted a brilliant comic that towers above most of what you’ll find one the shelves and spinner racks. Without a black voice behind Bitch Planet we might be getting a very different book that could easily be missing those high notes. 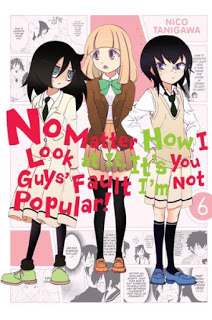 These books each deserve their own posts, but it doesn’t look like they’re going to get it. But here’s the deal I have for them: if I write more than three solid paragraphs about any one of them — and that does happen; I’m never sure how long my fingers are going to keep moving — that book will get broken out and become its own post. (So it’s entirely possible no one but me will ever read this introductory paragraph; that’s happened before with planned round-ups.)

Sam Zabel And The Magic Pen 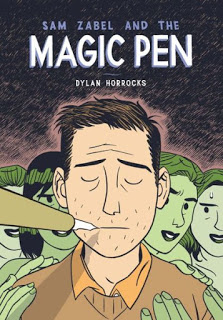 Autobio comics can be fun, but they can only go so far. Comics are such a time-consuming discipline, with so many hours spent hunched over a drawing board, that creators who rely on that mode either disappear up the navel of anatomizing their own process or misrepresent the few bits of their lives spent doing other things. Some creators, though, take “themselves” — or some version of their selves and lives — and throw that into something deeply unreal. And that can be much more satisfying.

This new graphic novel from New Zealander Horrocks — best known in artsy comics circles for his book Hicksville , best known in the CBR world for writing Batgirl for a while — is not about “Dylan Horrocks.” As you can easily see from the title, the hero is named Sam Zabel. And the Big Two superheroine he writes is Lady Night, a mystic hero in the Dr. Fate mode. And the fantasy world he falls into is, I have to assume, not something that comes directly out of Horrocks’s experience.

Though that would be pretty cool, if it did.

Any story about a creator becomes a story about creation: about making stories and being blocked and finding inspiration and working despite obstacles and the wellsprings of story and all of that jazz. Horrocks does a good version of that story here, but you’re not likely to be greatly surprised at the twists of the story or the places it goes. Stories about stories are a minor genre these days, and this is a pretty good one. (You can still read a version of it — I think it was somewhat updated and altered for book publication — on Horrock’s site.) And if telling this story re-energized Horrocks so he can tell more stories, and maybe even stories (unlike this and Hickville) that aren’t about how comics are special and cool and the greatest artform in the history of the universe while at the exact same time a pitiless industry that eats its young….well, that would also be pretty cool. 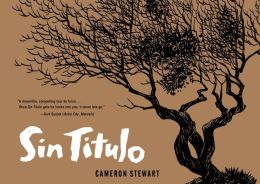 This is another fantasy story, with some elements in common with Sam Zabel — though not the connection to creative people or comics — but I probably shouldn’t emphasize that part, since those are the secrets that come out later in what’s mostly a mystery plot. And it also originally appeared for free online, though its URL leads to a blank page. (You can google it yourself, if you like: I see no reason to link to nothingness.)

So a young man goes to visit his grandfather in a nursing home and is shocked to learn the old man died a month before. A noir plot then start up: a photo of the grandfather with a beautiful young woman suggests depths, then disappears; a thuggish orderly is abusing patients and has darker secrets; the young man gets obsessed and starts neglecting his job and girlfriend. But there are also prophetic dreams, of trees and beaches, and the solution to this mystery will not be mundane.

Sin Titulo is a strong story, that turns naturally from realism into fantasy and uses its noir elements — not just plot; the layout and drawing style evoke classic strip comics and the dark alleys of old movies — with assurance and ability. 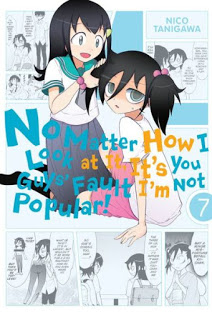 Every series falls into ruts; every comedy finds that its running jokes stop running quite so well. I’m not saying that’s definitely what’s happened to this manga series, since I could have had an off day while reading these, or maybe these stories just didn’t connect with me the way I hoped they would. But I am feeling that WataMote (the fan-name for the series, from the first two words of the Japanese title) is thinning out a bit, and not as exciting to me as it was before.

I don’t have much more to say about these volumes: I found parts of them funny, but more opaque. It may be because this clump of story got into more Japanese-specific moments that they didn’t connect with me, or maybe Tomoko’s schtik is wearing on me. Either way: this was still fun, and I’ll come back for another volume or two (which should see Tomoko to her graduation), but maybe not any more than that. It could be that the first few volumes are the best: that’s not uncommon. And those stories still exist, and are still as good as ever.