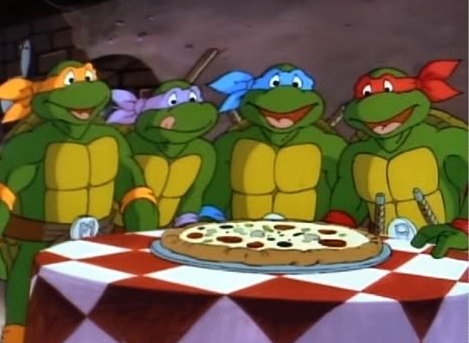 I’ve said before that some of the voice actors I’ve interviewed are the voices of my childhood, but I couldn’t possibly have been closer to interviewing a whole collection of voices from my early childhood at the same time than when I was at Awesome Con this year talking to all four of the original Teenage Mutant Ninja Turtles – Rob Paulsen, Cam Clarke, Barry Gordon, and Townsend Coleman. (I also interviewed the amazing Jess Harnell and Jim Cummings, so if you missed those interviews, check ‘em out now!)

I watched a fair amount of cartoons as a child, and among the ones with the earliest, largest impact on my young life were those coming out in the ‘80s, including Thundercats, Duck Tales, Inspector Gadget, Chip n’ Dale Rescue Rangers, He-Man, Danger Mouse, and more. But of all the ‘80s cartoons, Teenage Mutant Ninja Turtles consisently stands out as a favorite, with both a premise and characters (brought to life by the voice actors!) that I just loved. Like Greg Cipes (the current Michelangelo), I used to glue myself to the TV when TMNT came on, knew the theme song by heart (still do!), and totally had a favorite Turtle (Raphael! I do love snark). To this day I remember weird little bits of plot or character that apparently ingrained themselves in my brain from the age of six. So getting to talk (albeit a bit briefly, since the con was so busy) to all four of the Turtles in the span of the same hour was just really, really cool. As is being able to share those talks with you!

So if you’re a Turtles fan or you just like cool videos, click here for shout-outs from Raphael (Rob Paulsen) and Michelangelo (Townsend Coleman), and interviews with Leonardo (Cam Clarke) and Donatello (Barry Gordon).

And if you want to see what the guys were like in action, doing their fun voices at Awesome Con, check out the Awesome Con Twisted Toonz panel, as filmed by my great friend Kristy Sproul of Voice Chasers.

Enjoy! And until next time, cowabunga! And Servo Lectio!