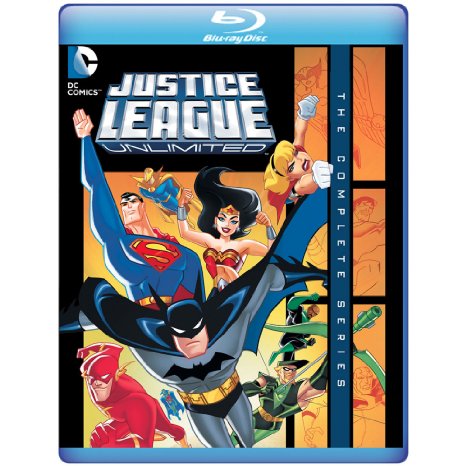 Justice League Unlimited was recently collected into a single Blu-Ray disc and, while I happen to own its on DVD – as well as literally everything else Bruce Timm and his menagerie created – it still stirred up a sense of unbreakable joy and nostalgia in me.

I use the term nostalgia in spite of the show itself being broadcast during my early to mid-twenties, mind you. I use it because we all know that nostalgia indicates that sentimental longing for a better time. And while we’re living in a veritable gilded age in terms of comics-to-TV live action adaptations, the animated realm is devoid of any direct counterpart to serious pulp storytelling. Sure Teen Titans Go! is on, and a handful of Marvel properties as well. But none of them hold a candle to Justice League. The absolute best episode of Avengers: Earth Mightiest Heroes – now over five years old – couldn’t shine the boot of the worst episode of any of Timm’s League.

I dare you to disagree.

What made the show so amazing, amongst countless reasons, would be its scope. With an unrivaled cast that built from the solid foundation of the holy trinity of DC (Batman, Superman, and Wonder Woman, in that order), and then peppered in perfectly distilled amalgams of dozens upon dozens of characters, they truly communicated to the world at large what the DCU encompassed.

No other cartoon has come close to the depth of the presented roster of heroes and villains. Beyond the bench though – and trust me, we’re gonna hit on that in another column soon – the actual storylines we got to follow held sway as mature tales that balanced wide-eyed action with well-focused moral debates.

Take perhaps the Cadmus arc, wherein Superman ultimately learned the potent lesson that he may have adopted Earth as his home, but his home wouldn’t turn a blind eye to the sins of his past. This was, of course, a nuanced and layered issue. The secret projects erected in the name of self-defense came only after Supes had inadvertently become the pawn of Darkseid. While we comicsphiles might have given the Big Blue Boy Scout a pass for succumbing to the plot-of-the-week, we couldn’t have expected all people would share in our leniency.

To see episode after episode building the case for the world being all but backed into war with the heroes that swear to protect it… in the name of being proactive? Well, ain’t no episode of Pokemon that’s coming anywhere near that neighborhood. From the birth of Galatea (Power Girl, by way of cloning Supergirl), through to the tet-a-tet between Batman and Amanda Waller, Justice League Unlimited proved that cartoons could be more than a series of punches and CGI set-pieces. They could be compelling prose that live action movies and TV shows are still too afraid to touch. It helps when the networks just think cartoons are for kids, eh?

And what of the merging of Brainiac and Lex Luthor! What was first presented as a delightful nod to the villain tag teams of our pulp and paper (or perhaps the stop-motion, animatronic, special effect laden action films of Generation X), soon grew into an apologue on addiction. Beyond an excuse to let Flash say the words “Speed Force” without so much as a quip, the arc cemented Lex Luthor as somehow a more complex beast than our beloved Batman. Here was a man, self-made as the Dark Knight, given his ultimate prize; infinite knowledge and power. And when it was ripped away from him? We were given a long-running serialized epic as Lex chased what could only be described as the ultimate high. In the end, Luthor even saved humanity by offering Darkseid the Anti-Life Equation (oh, you didn’t know? Halliburton invented that). Simply brilliant.

So, yes, I long for the days where a Saturday morning cartoon could strike to tell the most complex stories in the lexicon of comic lore. While the world of today has Gotham, The Flash, Supergirl, Agents of S.H.I.E.L.D., Agent Carter, Daredevil, Jessica Jones, Arrow, Teen Titans Go!, and Walking Dead…

my heart belongs to Bruce Timm’s Justice League. Because that, my friends, is how cartoons were meant to be made.