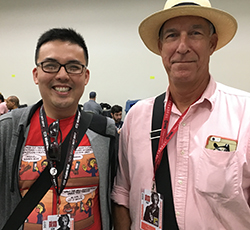 Ed Catto: From the Front Lines of Comic-Con

A part of the exuberance might be the novelty of it all. I was surprised to learn that one big domestic comic convention has an incredible churn; over 50% of their attendees are first timers each year. I’m not sure how that shakes out at SDCC, but it bears further investigation.

Everyone Grabs Their Chance 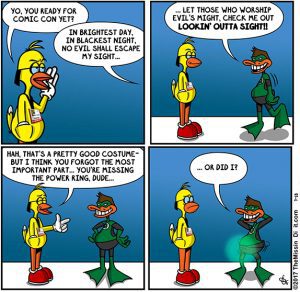 I don’t think the Romans used the phrase “shameless promotion,” but the Latin equivalent to that should be emblazoned on every San Diego Comic-Con badge. There are so many ideas, brands, companies, retailers, and creators all elbowing one another to get in front of consumers. And there’s a lot of money behind many of these efforts.

On the other hand, not everyone has the big budgets. And that means that many creatives get by with just a little grit and cleverness. Here are three determined and impressive entrepreneurs I met:

One more thought: I didn’t know Car Cosplay was a thing. I probably should have known when I saw that Captain America on his motorcycle at Cosplay Invades Auburn earlier this summer.

But Car Cosplay is alive and well on the left coast. The first morning of SDCC I was treated to the Bluesmobile blaring the Blues Brothers soundtrack from their trademark oversize speaker. (I wish I caught them playing She Caught The Katy; that’s my favorite song on from that movie). Later I saw a Superman car and a Batmobile.

Both were stuck in traffic.