Spoiler note: Various plot elements of the Bourne movies may be revealed below. The movies have been out for a while so I’m assuming those who want to see them have seen them. Nevertheless, the spoiler flag is flying just in case.

There are a number of movies that, when I come across them on the tube, I’ll stop and watch them. I tell myself that it will be just until a certain scene or bit of dialogue but the fact is I usually wind up watching them through to the final credits. When this happens late at night, I can wind up staying awake for far too long and suffer for it the next day.

The Bourne series of movies fall into this category. They include The Bourne Identity/Supremacy/Ultimatum and Jason Bourne but not The Bourne Legacy which, despite its name, has no Jason Bourne in it and appears to be ignored by the series filmmakers so I do, too.) 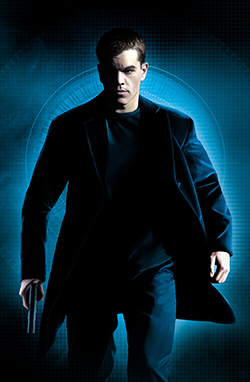 The reason I’m doing this retro review is to look at how something that starts fresh can drift into formula.

The films center on an assassin working for a clandestine special ops CIA agency. Born David Webb, he has become Jason Bourne – among other identities. Trained to be a living weapon, Bourne (wounded on one failed assignment) has become amnesiac. Over the course of the films, he starts to recover that memory.

The series starts with 2002s The Bourne Identity, loosely (some say too loosely) based on Robert Ludlum’s novel of the same name. It was a refreshing take on the spy/action genre, which previously had been defined by the James Bond films. The action was more realistic as were the characters and the situation. There was a car chase but it involved what I think was a Mini. The villain in the movie was not a huge over-the-top megalomaniac but the very agency that employed Bourne. The female lead was not a striking Bond girl but a Bohemian woman named Marie. The film ends with Bourne and Marie putting a new life together for themselves and the agency that hunted them has been closed down.

The film was a big success and re-defined the genre; the Bond films were re-cast in the Bourne mode – tougher, grittier, more realistic. They had needed to change and Bourne showed the way.

The Bourne Supremacy (2004) continued the trend. There’s a successor to the black ops agency in the first film but there’s a traitor inside who frames Bourne for a failed mission. In attempting to take him out, Bourne’s love Marie is killed. This is startling; Marie was a major character in the first film and her death has a major effect on Bourne, giving him a motivation that continues through the series. Still, the Big Bad is again the Agency or, at least, elements of it. We’re seeing a pattern developing.

The third film in the series, 2004’s The Bourne Supremacy, once again has Bourne and the Agency at odds. This time, the film winds up bringing Bourne back home to the U.S., specifically New York City. He learns the truth about his origin and there are touches throughout that bring us back to the first film suggesting this is the final installment in a trilogy.

In 2012, the studio tried to capitalize on its franchise with the Bourne-less The Bourne Legacy. It also tried to make Bourne more of a superhero. That didn’t work all the way around.

Last year saw Jason Bourne (with returning star Matt Damon) hit the theaters. Once again, a woman who is close to Jason is killed and once again the central villain is the Agency (or someone at the Agency). And the formula is starting to become obvious.

Every film has a car chase, each becoming more spectacular than the last. The first one was relatively modest and interesting. After that, any time Jason takes the wheel insurance rates are going up and there will be considerable collateral damage. In all the cars being upended or hit, I just imagine people being hurt and dying. I’m no longer impressed.

There will be a big hand to hand fight between Jason and… somebody. Somebody trained enough to give Jason a good fight but the outcome is never in doubt, It will be very violent and no music plays during it.

In every film, Jason says some variation on “This ends here.” Except it never does. If the studio has its way, it never will. So why even say it?

The antagonist is always the Agency or someone at the Agency. Always. Jason might as well be fighting Spectre and Blofeld.

In two out of the four films, a woman close to Bourne is killed. The first time it was effective if startling and had real impact and consequences. It’s starting to look like a trope.

Don’t get me wrong; I’ve enjoyed each Bourne movie I’ve seen and I wouldn’t mind seeing another. But what started out as fresh and different is becoming old and formulaic. That’s hard to avoid when you’re working on a series. How do you keep from repeating yourself especially when part of the attraction for the fans is that repetition of fave motifs and lines?

It can be done. The next Bourne should avoid the Agency or maybe have Bourne work with the Agency, Different settings, different stakes. As it stands now, they’re not doing sequels; they’re doing remakes.