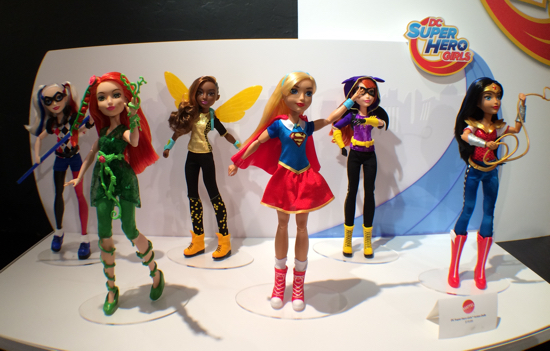 Wow, Toy Fair was an amazing time. Over four days, I saw my wallet cry in pain over how many things I wanted. Have you ever seen a wallet cry? It’s just devastating. But forget the feelings of an inanimate piece of fabric. Let’s talk about some of my highlights from my four days of awesome!

I attended the Manhattan show with my [IGH] site partner, Andrea and we noticed a friendlier tone than past years. Company representatives remembered us from previous years, which meant that it was more like greeting old friends. So, on top of a great experience of hanging out with some cool people, we also got some tidbits that we can’t share. What was really great, especially at the geekier booths, was that companies started asking for our opinions. There were more than one booth were people pulled out their notebook or phone and started quizzing us for ideas! Hopefully we inspired some great toys to come out.

As you might have guessed, I was on a Star Trek hunt. I scoured the floors for 50th Anniversary items. I was a little disappointed that many locations told me that new products were coming but not available for the show. Many places made a point to tell me that they would be unveiling around August for the major Star Trek convention in Las Vegas. However, I was pleased that some of my favorite toy companies were already showing a few pieces to excite and delight me.

Quantum Mechanix, who has done Star Trek pieces for a number of years, unveiled some amazing Kirk and Spock figures. They also said that Dr. McCoy is on the way. Mezco Toyz also showed off their Star Trek additions to their One:12 Collective line, which includes Kirk, Spock, and Sulu. They also mentioned that female characters are on their way to the One:12 line so that means Uhura! And my favorite piece, the ST: TNG Phaser was being shown by Diamond Select Toys. I really want to own that. They were also showing TNG figures, like Deanna Troi and the Borg Queen.

The top of the list was still Wood Expressions Multi-level Chess set, modeled after the TOS chess set. It is smaller than the one on the show, and while it is playable (even comes with Star Trek game rules!), would also make a fantastic display piece.

You may remember a couple weeks ago, when I was talking about my excitement about the changing tide of gender representation in toys. That has definitely held true. A few years ago, when I would ask about female characters, there was always a hesitation by toy makers. Now, companies seemed eager to talk about the female toys added to their line, or the gender-neutral nature of their toys.

Both companies that I mentioned in that last piece, Mattel and IAmElemental, were eager to speak with me about their role in the toy industry. I spoke with the creator of IAmElemental, Julie Kerwin, who radiated energy and excitement to see other companies following her charge to bring girls and women into toys. I also had a chance to speak with a number of reps from Mattel, who all seemed excited by the changes in Barbie and the introduction of the DC Superhero Girls line. Now, when going through their booth, I got to hear things like “Girls want to explore space” and “Girls like to shoot things too!” I know that there are still steps to be made, and battles to be fought. But this year, with even more companies like these, it felt like a cosmic shift in how the industry feels about girls.

So, I’ve barely scratched the surface of everything I saw and loved and wanted to steal. It was an amazing time! The toy industry is bright this year, and I can’t wait to see how everything develops.