Gail Simone on the passing of Bongo Comics

Gail Simone, comics writer, chief architect of Lion Forge’s Catalyst Prime line, and contributor to Mine! had many thoughts on the closing of Bongo Comics. With her permission, we reprint her essay here. 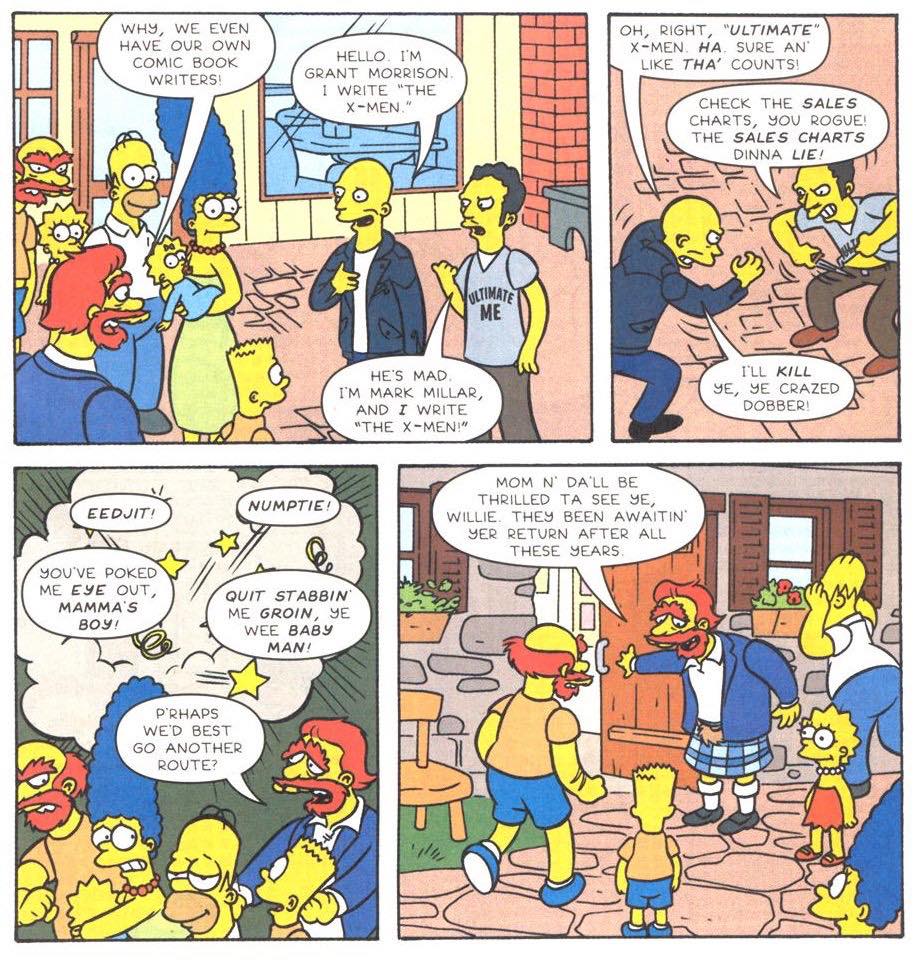 So, this is painful to talk about.

Apparently, Bongo Comics is shutting down production, and the last issue of Simpsons Comics will be issue 245, after 25 years.

I don’t know the particulars of it, I haven’t asked for inside knowledge. But it’s a shame for a number of reasons.

Just culturally, Simpsons were often the ONLY comics available on some newsstands. They were also one of the few non-superhero books to have loyal followers AND casual readers. They employed top-notch creative and editorial people.

And personally, they were the first professional publisher to hire a particular red-headed hairdresser from the Oregon boonies.

I never thought I would be a writer. It was drilled into my head as a kid that I would never make a living from it. And certainly, I had things going against me by many accounts; wrong gender, wrong background, wrong home base, on and on.

Bongo didn’t care about any of that, they only cared that I was funny and could tell a story. They never failed to treat me with respect, dignity and kindness even though I was a nobody from nowhere.

I remember, I had been writing a comedy column on CBR for a while. Many Comics editors asked me to pitch for them and I turned them all down flat, I just didn’t think I was a “real writer” and me getting a job would take one away from a REAL writer, whatever that is.

Cartoonist Scott Shaw had read and liked my column. He said, Bongo needed writers, and I should call them. I said no. He said, well, it doesn’t matter because I’ve already told them about you and they’re calling tomorrow.

I sat up all night trying to figure out what to do. Then I finally decided I had to take the chance, because it was never going to come again. I took the call. And it changed my life.

They were kind, and they were patient. They asked me to send a few springboards, they had to explain what that was. I sent 25. They liked nearly all of them.

After that, they helped me learn how to outline, how to write for a cartoonist, and all about the vocabulary of comics. If I had been thrown into the thresher at a bigger publisher, I would likely have been mangled up before I could ever learn all that. But Bongo was like that, they cared.

And being female was never an issue, never. I remember after my first couple stories, I got a note saying they wanted to call. I was worried that it was bad news, and this lovely dream would end. I worried a lot back then, it all seemed so precarious.

And they called, and said, “Gail, we are bumping you to our highest page rate. Our best writer deserves our best rate.” I sat down and cried, not because of the money, but because of the respect and kindness. And I stress, this was fifteen years ago, when it still was a little more unusual to see female writers.

I tell that story not about because it says anything about me, I tell it because that’s how they operated. No drama, no goofy politics or power struggles. They just wanted to put out good comics and they treated people with dignity and respect. And it made me want to be a Comics writer forever.

I have a couple more short memories.

First, I remember they invited me to come see their offices…it was very plain from the outside, intentionally so. But once you got past security, it was a huge building with seemingly every square inch of wall space covered with Simpsons art and merch. It was Willy Wonka for cartoons. They had a room with all the Simpsons arcade and pinball games. Weirdly, the only room that WASN’T covered in that stuff was Matt Groening’s office.

At one point, they said they would take all the space on my schedule I could give them. I wrote comics, tons of Sunday strips, and pieces for their big collections, and more. For a while, they were hot on the idea of Lisa Simpsons child mystery novels, with Ralph as her Watson. Somewhere, the first chapters of those exist, but they never happened as a published work.

I remember meeting Matt Groening. He was very kind, especially about my Sunday strips. It all seemed surreal, Simpsons wasn’t just the funniest thing on tv, it was the BEST thing, as well, and the world loved them. And I got to write them.

Bongo was always run by Bill Morrison and Terry Delegeane. Two of the most stand-up guys in comics. If they said something, you immediately knew it was true. And both had a great eye for what would make Bongo great. I miss working with them.

Two of my all-time favorite scripts were written for them…an issue length take about the Simpsons going to Scotland for a golf tournament…I was so PROUD of that story. You may have seen the oft-memed on-panel fight between Grant Morrison and Mark Millar.

And the other is a Treehouse or Horror story I wrote, that the amazing Jill Thompson drew, about evil cereal mascots. It might still be my favorite single story I’ve done.

All of it happened because of Bongo. They had some tight restrictions given to them by Fox, but they still encouraged risk and whimsy.

Even forgetting the Treehouse or Horror collections, they routinely had talent like Ian Boothby, Chuck Dixon, Scott Shaw, and Ty Templeton. Every issue achieved and maintained a high quality, they just didn’t waste time with mediocrity.

I’m sad to see them go. I wish more mainstream readers had read the books, because in 25 years, they published some of the funniest, smartest and best-drawn comics out there.

And they gave me a chance and taught me how to do this weird thing I love so much.

So I am forever grateful.

Thank you, Bongo. You will be missed!