Maddy & Anya review the first two episodes of The CW’s new teen drama Riverdale comparing it to the comics. 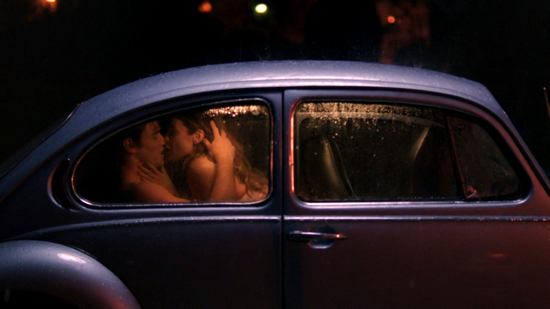 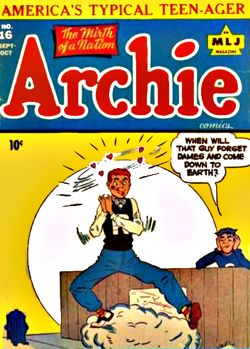 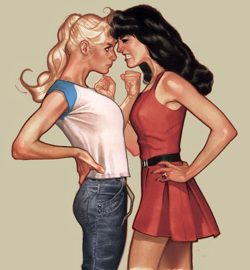 Veronica Lodge: “Bring it on, Blondie. Bring it on!”

Like so many others, I have loved those two iconic frenemies since I was a kid, which is mmpph years ago now. Sometimes I was Team Betty Cooper, and other times I was Team Veronica Lodge – there were times when I thought that Betty was just too good for her own good I and wanted her to pull off some nasty stunt to get back at Veronica… but then again, every time it seemed that Veronica’s nose was permanently up her own damned stuck-up ass, the girl would reveal her heart of 24-carat gold. I never really got the yearning both girls had for Archie; redheads have never done it for me. Besides, he was all too often incredibly mean to Betty, dumping her the minute Veronica waved her finger, and, at best, seemed to treat her like a pair of well-worn sneakers, the kind you put on when your feet are aching and tired after a long day at work. 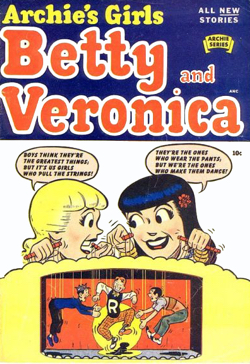 Veronica’s adoration of young Mr. Andrews was a complete mystery to me, except that having a thing for the son of an ordinary “Joe” was possibly some kind of rebound complex against her rich-as-Croesus parents, especially her father. Although I seem to remember reading a story in which Mr. Lodge said he and his wife sent their daughter to the Riverdale public school system instead of to some private school so that she would grow up with an appreciation and awareness that not everyone in the world was wealthy – or something like that. Was there such a story? To be honest, I’m not sure – maybe it’s just an idea that I made up in my head to explain what the hell the Lodges were doing in Main Street, U.S.A., instead of the Upper East Side of Manhattan. Then again, the only Riverdale that I knew was a leafy and wealthy conclave just north of Manhattan that was a pretty exclusive area, boasting the might-as-well-be-private Horace Mann Public School and the absolutely private Riverdale Country School, both which, if I may digress for just a moment, offer a superb education…

But to get back to and finish the original thought of the above paragraph, if Daddy Lodge wanted daughter Ronnie to mix with the peasants, then why did he object to her going out with one? Of course, there are peasants and there are peasants, he might say. He didn’t seem to object so much to Reggie, did he?

Archie’s Girls Betty and Veronica was first published by Archie Comics in March 1950, although Betty made her first appearance in Pep Comics #22 (1941) and Veronica four issues later. Although friends, their adventures pretty much revolved around the girls’ rivalry for Archie. Hannah Rosin, who authored a recent article about the blonde and the raven-haired teenagers for Smithsonian Magazine (“Why Betty and Veronica Are the Real Stars of Riverdale,” July 2016) noted:

“If the comic were a field guide to teenagedom, what did Betty and Veronica teach these girls? At best they are complementary archetypes, saucy and sweet, like Ginger and Mary Ann. At worst they are poison to the developing female mind. For decades, all those two ever did was “accidentally” spill lemonade on each other’s dresses. The duo conveyed that being an American teenage girl meant being a boy-crazy aspiring pinup who hated her best friend.”

It’s a good point, but I guess I never got the complete message. I never felt “boy-crazy,” although I had my fair share of crushes (which, like most crushes, were never really acted upon) and I don’t remember ever actually “hating” my best friend over a boy – sure, there were girls I was jealous of, but that was because I thought they were “prettier” or “more popular” than me, the two usually going hand-in-hand, and they were never girls I would say I was friends with, anyway. There was one girl who thought I deliberately stole her boyfriend, but I didn’t even know he was dating her when he asked me out to make her mad after they had had a fight, and was it my fault that he ended up liking me better than her? I only found out about this teenage guerre des coeurs (“war of hearts”) after the fact, when her crowd ganged up on me one day after school, called me all sorts of horrid names, warned me that “you’ll be sorry,” and sent me home crying. But that’s another story….

But I did love those fashion pinups, Ms. Rosin, the ones that were basically splash pages of Betty and/or Veronica in “different looks” – sometimes it was for “Fun In The Sun” with the girls modeling bathing suits (classic pinup, although rated “G”) and sometimes it was “Haute Couture,” featuring Betty in the latest fashions. Other times the page(s) would feature Betty and/or Veronica in different hairstyles – Betty with a short, chic pixie cut or Veronica in a pony tail a la Betty or both in “updos.”

But always, and always, no matter what, Betty and Veronica were friends, real friends, who always and always came through for each other. Yeah, they got on each other’s nerves, yeah, they would attack and solve problems in their own ways, and yeah, sometimes they would swear that the friendship was over for good! But it never has been and it never will be, because Betty and Veronica are forever. My daughter Alix read them, and so does the next generation of my family, my 16-year-old niece Isabel. That’s because, as Hannah Rosin said in her piece: “The idea that Betty and Veronica truly cared about boring old Archie was always comically implausible. The real chemistry, and all the fun, happened between the two girls.”

After it was announced in 2014 that the writer and creator Lena Dunham was writing a Betty and Veronica mini-series, some fans suggested to her that she make the girls lesbians. I think I understand why that would be important and an interesting, um, twist on the two teenagers, and in the right hands it could be an absolutely terrific story, but I also think it would work better outside the established Archie universe, the way that the zombie apocalyptic Afterlife with Archie is or Archie Marries Veronica/Betty was, if only because I also think it’s super important for girls (and women) to know that sisterhood is, indeed, powerful for all girls and women, and that possible to have a wo-mance while still desiring men as sexual partners. (See Dunham’s Girls or Sarah Jessica Parker’s Sex and The City.)

But maybe I’m just being an old fuddy-duddy the way some Star Trek or Star Wars fans are, resenting and rejecting any change in canon. Like making Hikaru Sulu gay, which I thought was terrific, although some others did not.

I’ll have to think about that.

Right now, as Adam Hughes has written, the girls on the outs. I mean waaaaay outs. It’s over the effort to save Pop’s Choklit Shoppe, which is about to bought out by the evil Starbucks Kweekwegs Koffee, “that big chain from out West,” Pop tells the kids. Betty is immediately on it:

“We cannot let this happen! We will not be frightened by some big, dumb corporation and their gaspacho tactics.” (I think she means Gestapo. Good one, Adam!) “If we allow this to happen, what’s next? Where will it end? Trendy eateries, fast-food franchises…Riverdale will become just another highway stop for truckers, holiday drivers and…and tourists! If we give in now Riverdale will just become like any other town. It won’t be special anymore. Not even for us. The big corporations will win…the tourists will win. If we let Pop’s close down, then the tourists already won.”

So Betty Cooper is organizing a drive to raise money so that Pop can pay off the mortgage on his Shoppe and tell Kweekwegs Koffee to go to hell, while Veronica Lodge is just tagging along, too busy sitting on her ass and texting and tweeting or whatever the hell she’s doing to say or do anything.

And then Betty finds out that Kweekwegs Koffee is owned by Lodge Industries.

The girlfriends face off.

And the world holds its breath…